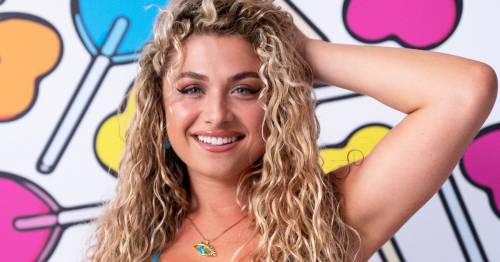 Love Island fans have taken to social media to compare newcomer Antigoni Buxton to a previous villa star from 2019.

The 26-year-old singer made her first appearance on the ITV2 dating show on Tuesday (June 21), as she was seen striding into the villa before relaxing on a sun lounger.

Viewers were quick to notice the newbie bore a striking resemblance to someone they'd seen on the show before – Lucie Rose Donlan from season five.

One person Tweeted: "Wait is Lucie back?"

Another said: "This new blonde bombshell girl is giving me lucie vibes from 3 seasons ago."

A third fan wrote: "Genuinely thought we had Lucie back in the villa," whilst someone else said: "they got lucie donlan reincarnated entering the villa."

Antigoni Buxton is set to shake things up in the villa
(

Lucie Donlan appeared in the show three years ago
(

Antigoni – who is the daughter of celebrity chef Tonia Buxton – has said she isn't too keen to step on anyone's toes, unlike her lookalike Lucie who was known for causing her fair share of drama in the villa.

Before heading into the villa, Antigoni said: "It’s not my intention to tread on anyone’s toes but if I feel the energy from somebody and that connection then in a very open and honest way, I will explore that but I’ll be transparent with everyone in the situation.

"I won’t know who I’m feeling until I get in there – I need to meet somebody in person and see their energy and vibe."

She added: "I’ve been single for almost a year and a half and for the whole of the last year my goal has been to have as many different experiences as possible.

"I really just want to say ‘yes’ to things."

Antigoni said she puts "100%" into someone when she likes them and hopes to find someone who will give that back to her.

Lucie, 24, starred in the fifth series of Love Island and coupled up with a number of boys in a bid to find the one.

She originally coupled up with Joe Garratt but then decided Tommy Fury was more her type.

She later coupled up with Anton Danyluk and George Rains. Lucie left the villa on day 36 with Joe and they tried to make a go of things, before separating in December 2019.

Lucie has since confirmed her relationship with Love Island 2020 star Luke Mabbott and the pair got engaged in December 2021.

Love Island continues weeknights and Sundays at 9pm on ITV2

Previous : Bank issues NHS text scam warning as man loses £1,000 – what to look out for
Next : Phillip Schofield backs suicide campaign as he opens up about his own ‘very dark times’