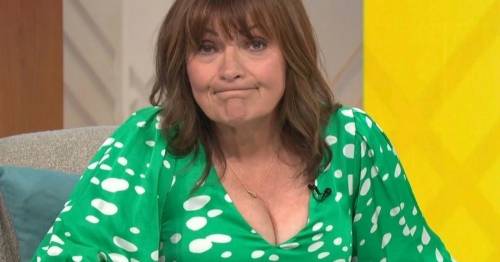 Lorraine Kelly distracted viewers at home from their breakfasts by wearing a plunging dress on her ITV daytime show.

Although Lorraine was busy presenting the day's hot topics, viewers were too busy focusing on something else.

"Lorraine’s trying to encourage more viewers," one viewer posted on Twitter while another said: "Lorraine is looking very titillating this morning."

While a third added: “Lorraine going for it this morning, full pelt [side eyes emoji] #GMB.”

Viewers were distracted this morning
(

"Sorry, Lorraine – a bit ‘booby’ this morning ?" another mentioned online.

It comes after Lorraine revealed to viewers she 'faced her fears' head-on after getting back on a horse for the first time in a decade.

The star was left badly injured after her horse trampled on her while attempting a jump during a charity challenge in 2012.

She recently faced her fears
(

At the time, she was told the wound to her thigh missed her main artery by millimetres, and she lost three pints of blood during an emergency four-hour op.

The star has not sat on a horse since. But in emotional scenes that aired on her show, the star finally got back on the saddle.

Choking back tears, the presenter managed to mount a horse called Zion after teaming up with Sir Lee Pearson, a 14-times Paralympic Games gold medallist.

He managed to gently coax the visibly nervous star onto the horse and reassured her that she would be OK.

In the end, she spent at least 30minutes on the animal, with several circuits of the enclosure.

Lorraine admitted she felt a “real sense of achievement” after finally summoning up the courage ten years after the accident.

Lorraine Kelly distracts viewers from their breakfast in plunging dress
(

"I was frightened about it," she said. "I kept thinking ‘I really need to do this, it’s a new year, you should really do this’. But then Covid happened and i’d make an excuse. But then I said to myself ‘No, I have to do this. If I don’t do it now, I’ll never do it’. “

Speaking of the moment she finally got on the horse, Lorraine continued: “When he started to walk I was like ‘oh my God’, but it was fine, it was absolutely fine. I mean I don’t think it is something I would do again but I feel I have faced my fears."