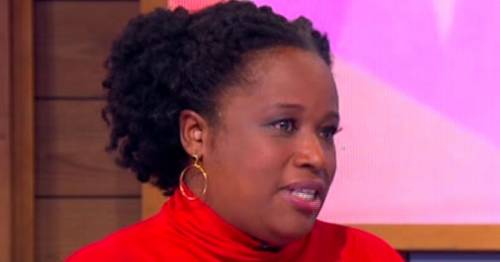 Charlene White broke down on Loose Women as the panellists clashed over Boris Johnson's lockdown parties.

The presenter and her fellow panellists – Linda Robson, Nadia Sawalha and Carol McGiffin – were discussing the Prime Minister's grovelling apology over the latest lockdown party.

Charlene and her family had to bury her aunt around the same time, as she admitted Boris' apparent breach of lockdown rules left her feeling so upset as she broke down in tears live on air.

Speaking on the ITV show, she said: "My family stuck by the rules. We had to bury family members without being able to hug each other. I had to sit in a crematorium where my aunt was buried.

The Loose Women star broke down
(

"Because I wasn't living in the same household as my brother and sister and my dad, I was in a pew by myself with my baby daughter on my lap as we're all in floods of tears and we can't hug each other."

She cried even more as she added: "I stood by the grave side as grave diggers were filling that grave and watching my cousin in floods of tears and not being able to hug her because we were following the rules, because we didn't know what else to do.

Her co-stars were worried for her
(

"We were told we had to follow the rules so we were following the rules with the understanding that those in charge were also doing the same thing."

Charlene admitted Boris' decision to attend the event made her rethink her actions that day.

Charlene was in tears
(

Boris made an apology for the event during Prime Minister's Questions yesterday.

He said: "I want to apologise. I know that millions of people across this country have made extraordinary sacrifices over the last 18 months. I know the anguish they have been through – unable to mourn their relatives, unable to live their lives as they want or to do the things they love. I know the rage they feel with me and with the Government I lead when they think in Downing Street itself the rules are not being properly followed by the people who make the rules."

Previous : Job experts explain exactly how to ask for a pay rise or promotion – and get a ‘yes’
Next : Holly Willoughby admits she was horrified as she fell in love with husband