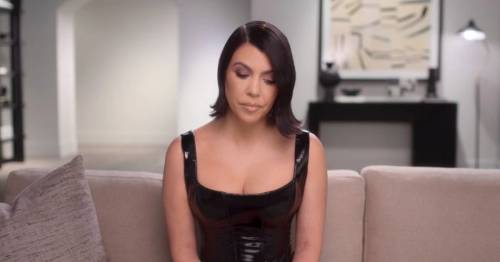 The SKIMS founder told Kendall to "let them enjoy their f****** night" after she started talking about Kourtney's ex during the celebration.

During the most recent episode of The Kardashians, Kendall, 26, sat with Kim, 41, Khloe, 37, and Kylie, 24, when she piped up: "Do you have, like, sympathy for Scott? Like, do you have sympathy at all for the position that he's in? Because it doesn't seem like you do."

Kendall Jenner questioned how Scott might be handling Kourtney's engagement

Newly-engaged Kourtney revealed in a confessional: "I'm sensitive to him and his feelings and I communicate with him about the kids and I make sure that he's good, but beyond that I just got engaged. I want to be happy and enjoy the moment."

Kim chimed in, ending the conversation by saying: "Guys, are we so f**king crazy we're talking about this? Can we talk about this tomorrow and let them enjoy their f**king night."

It wasn't just Scott that wasn't thrilled about Kourtney's engagement to the Blink 182 drummer.

The sisters made a scene at Met Gala earlier this week
(

Her daughter Penelope "took it hard", according to Kourtney.

After the proposal, she realised that she'd missed a few calls from her daughter.

She called her back and said: ""P! Do you want to know what my surprise was? We got engaged!!"

Daughter Penelope was upset over her mum's engagement
(

Her daughter shouts back: "Hang up!" before ending the call herself.

Kourtney then admits to Kim: "I feel bad for P."

Then, in a confessional interview, she says: "Penelope took it hard. I think it's a big change for her. And even though she loves Travis, I don't think she knows what that means.

Kim was shocked that the sisters were discussing Kourtney's engagement
(

"Is it taking me away? She doesn't know what it means."

Her son Reign also didn't give her the best reaction either.

She FaceTimed her seven-year-old son to share the news.

Confused, he asked: "What does that mean?"

Kourtney explained: "It mean he proposed and gave me a ring!"

Travis asked Kourtney to marry her on a beach in California
(

Her son shouts back: "Not exciting!"

In another confessional, Kourtney got emotional and dug at her mum.

"I do wish that my kids were here," she admits. "I think it would have made them feel more included and part of the surprise. I know that my mom made that decision, and it probably wasn't her best."