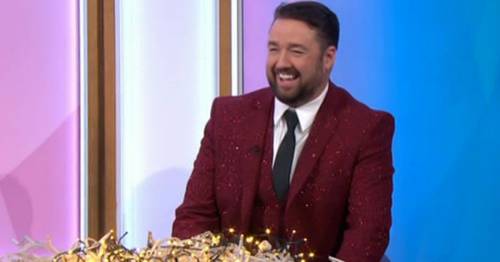 Jason Manford was a guest on Loose Women on Wednesday – but might not be invited back after he trashed some studio Christmas lights.

The 40-year-old comedian was on the show to promote his upcoming tour – and also to perform for the ladies on the panel of the ITV show.

Wednesday’s episode was hosted by Christine Lampard and had a star panel consisting of Jane Moore, Coleen Nolan and Linda Robson.

And while the ladies were excited to welcome Jason on to the show, he himself was unimpressed by the set up that was offered to him for his singing performance.

To the side of the Loose Women desk was a grand piano which had been covered in fairy lights for the comedian’s big performance.

But Jason was unimpressed with the arrangement of the twinkling lights that had been places atop the grand piano – which he said looked like they had been thrown on top of the instrument as an after through.

Standing up from behind the piano, Jason complained: "What I also love is that someone has gone ‘Can we make this Christmassy?’

He slammed the lights on top of a piano – breaking them
(

He then mocked someone dumping the lights on the set going: “Yeah. There you go.”

As the panel burst into hoots of laughter, Christine noticed that the lights had been damaged by Jason’s antics.

She gasped: “They just happened to go out as well.”

Jason acknowledged his destruction, saying: “I broke them. ‘That’ll do’.”

Earlier in the show, the Loose Women ladies discussed taking children to work in light of the news that Labour MP Stella Creasy was reprimanded for taking her three-month-old son into the Houses of Parliament.

Jason joked he works so hard to "get away" from his own children – adding “they’re at school, they won’t see this.”

Addressing Stella’s plight in the House of Commons, he also laughed: “All that whining and crying and moaning – that's going to keep the baby awake!”

The Loose Women panel debate, however, awaked rage among viewers – who took to Twitter to slam the show for failing to promote better rights for working mothers.

One incensed fan tweeted: “@loosewomen absolutely destroying equality discussing how mothers shouldn’t bring their babies to work saying how ‘female pilots’ can’t work with a baby strapped to them. Not exactly the point really we’re talking about equal access to democracy. Women have to represent, stand up.”

Another argued that the debate surrounding parenting was too one sided and that men could be tasked with looking after the kids.

The unimpressed fan tweeted: “@loosewomen lots of talk on women taking their babies to work! What about the men? Can’t they take the child to work? Answer #flexibleworking.”