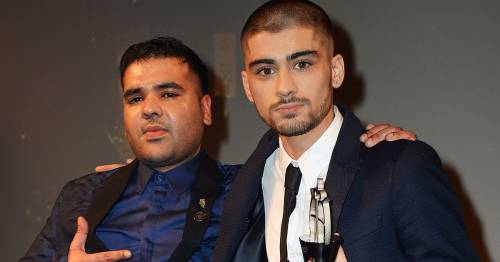 I'm A Celebrity…Get Me Out Of Here! star Naughty Boy was involved in a bitter feud with One Direction's Zayn Malik.

The pair used to be friends until there was a disagreement over who had leaked Zayn's music.

Not long after the father-of-one quit One Direction to go solo, Naughty Boy took to Twitter sharing a clip of him singing a new track with the hashtag #Zaughty.

Fans of the duo were excited a collaboration was in the offing, but two months later Zayn was fuming posting: "@NaughtyBoyMusic You fat joke stop pretending we're friends no-one knows you."

He then added: "Someone learned how to upload a video… maybe now he should learn how to use logic ha you ain’t sh** but a faker."

At the time Naughty Boy, who's real name is Shahid Khan, told The Sun: "That's not how I know Zayn to speak, even face to face. I definitely thought at first that he had been hacked.

"The fat joke thing wasn't necessary and he's getting a lot of backlash for that because a lot of his fans don't look like Selena Gomez."

Another possible reason for the pair's feud was Zayn's decision to hire new management to help get his solo career off the ground.

A source told the Mirror at the time: "Until now, things have been a bit up in the air and a lot of the public information about Zayn's career has come from Naughty Boy chatting about it."

Zayn accused his former friend of being a 'fat joke'

Despite the apparent bad blood between the pair, Naughty Boy did defend the Bradford-born singer's decision to quit One Direction while he was on Celebrity Juice two years later.

Speaking to host Keith Lemon he said: "Zayn's in a great place. Zayn left for his own personal reasons and one day people will know everything. Right now is not the time."

The La la la hitmaker is currently bundled up against the Welsh wind in I'm A Celebrity…Get Me Out Of Here!

Naughty Boy has already lived up to his name on I'm A Celebrity…Get Me Out Of Here!

And it looks like the star is already living up to his name having revealed he had smuggled in some spices.

Speaking in the Telegraph on set, Naughty Boy told the crew what he had done, before asking if he was allowed to use it – knowing full well the stuff was contraband.

He was planning on giving his fellow campmates' rice and beans a bit of a kick, but as stipulated in the rules – it was confiscated straight away.

The star said, showing the contraband to the camera: "Before I left, I ground some spices that could make rice and beans actually taste a bit nice so what I did, I put it in my sock."

I'm A Celebrity…Get Me Out Of Here! continues tonight on ITV at 9pm.

Previous : I’m A Celeb’s Arlene Phillips doing ITV show for fun, not to ‘top up her pension’
Next : Citadel Bulldogs basketball coach Duggar Baucom taken to hospital after collapsing early in game at Duke Blue Devils