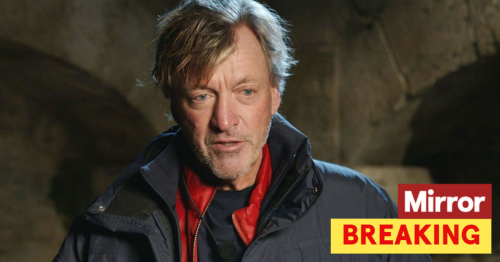 Richard Madeley has been rushed to hospital after falling ill overnight in the I'm A Celebrity camp.

The 65-year-old was sent to A&E after worrying production staff and his fellow co-stars with the sudden illness.

He was seen immediately by the show's on-site medical team and taken to hospital as a precaution.

An ITV spokesperson told the Mirror: "Richard was unwell in the early hours and was immediately seen by our on-site medical team. He's since been taken to hospital as a precaution, the health and safety of our campmates is our priority."

It comes just after Richard took part in the Kitchen Nightmares trial, which saw him dive headfirst down a shoot and doused in mouldy fruit and vegetables as he searched for stars.

Richard Madeley has been rushed to hospital on I'm A Celebrity

He was left disappointed after returning from the trial with only four stars out of ten after struggling to untie knots.

Before entering Gwrych Castle, Richard said that he wanted to be voted to do trials.

“I really hope I do get voted for the Trials," he said.

“The thing about this programme is you mustn’t go in to it if you take yourself remotely seriously. I don’t and I am thoroughly looking forward to being covered in god knows what!

“You have to be prepared for people to laugh and I see this as a bl**dy great romp of fun!”

He took part in the Kitchen Nightmares trial
(

Richard's hospitalisation comes amid much drama in camp already, with Naughty Boy accusing his fellow co-stars of being "fake" as tensions soared in camp.

The music producer took aim at the stars in the main camp as he fumed over being picked to take on Snoochie Shy in the Treacherous Traps challenge and said he was considering quitting the show.

He told his fellow stars in the Clink that he couldn't fake a "love" for his fellow celebs after they sent him to the trial, as he explained how he doesn't think "there is any love" between them, despite how much they might say it.

As he discussed it with his fellow celebs, Richard had told him: "You're reading too much into this. You did really well today and I know you keep saying 'no I didn't', but yes you did."

But he snapped back: "You're missing my point. Doing a trial and a challenge on the same day is something no one has done.

"No one knows what I'm going through right now, please."

This isn't the first time that a star taking part in I'm A Celeb has fallen ill and has had to pull out of the show.

In 2019, soap actor Cliff Parisi was also forced to drop out of a Bushtucker Trial after being taken ill.

*I'm A Celebrity returns tonight at 9pm on ITV