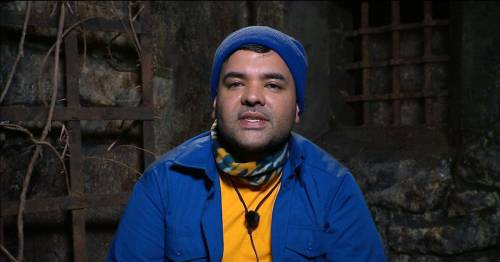 Naughty Boy has only been in the I'm a Celebrity castle for four days, but he's already one of the most talked-about campmates.

He is threatening to quit the show after he was voted to do a trial by the other camp, before learning he might be moving in with the very celebs who put him through the hellish tasks.

"I do think my time here is done," the 36-year-old said to his fellow celebs in The Clink.

"I had a feeling earlier and I was thinking about mum and obviously I love you guys – I don’t think after knowing what the Main Camp probably knew what they were putting me through knowing I did the challenge earlier – I don’t know if I could ever join that camp."

His desire to quit so early on in the show has led to viewers comparing Naughty Boy to Gemma Collins, who famously departed the Australian jungle after just three days in 2014.

But Naughty Boy and Gemma are actually friends.

Naughty Boy is already threatening to quit I'm a Celebrity
(

Back in 2019, the pals heavily promoted the fact they were working on music together.

Naughty Boy has previously collaborated with Beyonce, Sam Smith and Rihanna, and TOWIE star Gemma was next up on his list.

They met at the BRIT Awards, and Gemma serenaded Naughty Boy backstage with a rendition of his song Runnin', which Beyonce originally sang on.

"When she sung me that, I was thinking, 'This girl can actually sing, she’s got a personality and she’s got a following. This is the new age superstar'," admitted Naughty Boy.

"When people hear the music and hear her voice, I think it’s going to take her up a notch.

"I don't consider Gemma a reality TV person, I consider her a superstar."

The song was reportedly about Gemma's relationship with James Argent

He said the track he'd worked on with Gemma was a romantic ballad which spoke to her situation with then-on-off boyfriend James 'Arg' Argent.

But it all went up in flames the following year as Naughty Boy revealed he'd scrapped his song with Gemma, despite her insistence the song was already recorded and ready to go.

Hinting at drama behind the scenes, Naughty Boy said Gemma needed to "really want it" for him to consider working with her again.

"I was going to do something with her as she can sing, but I have my priorities. I think she has potential but it has to come from her.

"She has to really want it. I wish her all the best with it."

Meanwhile, Gemma blamed their busy schedules and still believes they will release the track one day.

"I had to put my music on hold because this year ended up being so busy," she told The Sun.

"I was working with Naughty Boy and we were looking to get out a Christmas song but our schedules didn’t line up and we couldn’t make it happen.

"We’ve got an amazing song in the bag and it can come out at any time, so we are looking at next summer. It’s written and all finished, which is really exciting."

However, an insider suggested there was more to the story.

"Some of [Naughty Boy's] advisers think he should try and distance himself quietly from Gemma now this has gone off the boil," they claimed.

"He is a serious musician and they think it could tarnish his credentials as a producer."

When the producer first entered the I'm a Celeb camp and introduced himself with his professional moniker, many viewers all said the same thing.

They wondered if he was going to go by Naughty Boy the entire time, or if he'd let his campmates call him by his real name, Shahid Khan.

He's never revealed the reason for his unusual stage name, but it was his real name that he went by when he starred on Deal or No Deal in 2007.

Shahid won a whopping £44,000 on the Noel Edmonds-fronted show, which he splashed on recording equipment, boosting his stellar career which went on to see him nominated for two BRIT Awards and winning two MOBOs.

"I've always had a natural ability to make melodies since I was a kid but I never really utilised it," he said of his hopes to become a music producer.

Noel replied: "You want to help people with your music?"

"It could be a long way away, but I'm allowed to dream," replied Shahid.

It has been revealed that the star was meant to appear on the 2020 series of I’m A Celeb, but he was forced to pull out as it was "too risky" to leave his mum Zahids after her dementia diagnosis in 2019.

He was replaced with Radio 1 DJ Jordan North, who ended up coming in second place behind Giovanna Fletcher.

* I'm a Celebrity continues tonight on ITV at 9pm