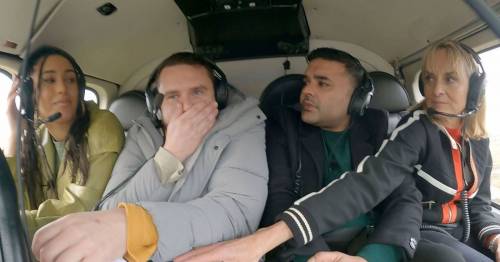 I’m A Celebrity… Get Me Our Of Here! put viewers through something of a gruelling challenge themselves as they were forced to listen to Danny Miller talk about swallowing vomit while travelling to the show’s castle.

Cameras followed 30-year-old Danny and fellow contestants Naughty Boy, Louise Minchin and Snoochie Shy as they boarded a helicopter to be flown off to meet show hosts Ant and Dec.

Unfortunately, the helicopter ride was far from smooth – with viewers watching as the contestants screamed and wailed while the vehicle rocked around the air, alongside mountains, and over the sea.

Emmerdale star Danny was clearly struggling not to throw up and was seen clutching a sick bag while the helicopter bounced up and down in the air.

Taking a motherly tone, 53-year-old Louise gasped: “I’m not going to let you be sick, Danny,” as she tried to reassure the soap star that everything was going to be fine.

But Danny himself then declared: “I’ve swallowed about three mouthfuls though.”

This prompted Dec to rename Danny: “Being sick in his own mouth three times boy.”

Viewers watching the show were repulsed by the vomit discussions.

Danny clutched a sick bag while the helicopter rocked around
(

One grossed out viewer wrote on Twitter : "I’m a celeb quotes that are relatable to a night out: ‘I’m not gonna let you be sick Danny’ ‘I’ve already swallowed 3 mouthfuls’ #ImACeleb."

While another suggested Danny had sealed his own fate, tweeting: "Danny Miller is going to be comedy gold, three mouthfuls of sick already. HAMMER HIM ON EVERY TRIAL! #ImACeleb."

Danny has been forced to defend his decision to feature on I’m A Celeb – just days after it was revealed he and fiancée Steph Jones welcomed their first child together.

He said: "Everyone is going to have their own opinion. The way I looked at it is, I made the decision once we found out we were naturally pregnant.

"We said, all these dates are now going to be aligned. I was asked back in February to do the show and once I'd said yes and everything had taken a turn. It wasn't signed on the dotted line by any means, but there was a very good chance in February it would happen.

"[Some] people think it's out of order, but there's people who work for a less wage who have to go away and provide for their family who work in the Army, who don't get contact and don't get to see them for six months.

"This is three weeks of my life and Albert isn't really going to remember me being there or not. Steph is doing amazing with breastfeeding, she's an amazing mum. It gave me even more confidence to want to go to the Castle and provide for the family.

"Alright, I'm not going to have that three weeks, but I'll spend the rest of his life making that up to him. It'll give me money to be able to do things with him that I wouldn't have been able to do five or six years ago.

"So, to sacrifice three weeks for Steph and the baby is almost an easy decision to make.”

I’m A Celebrity… Get Me Out Of Here! airs on ITV week nights at 9pm.

Previous : I’m A Celeb’s Ant and Dec reprimand Danny Miller over ‘sarcastic’ response
Next : Adele was ‘ready to go to jail’ after being pulled over by police officer in America