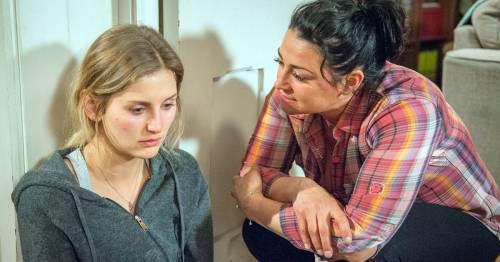 How did Holly Barton die in Emmerdale, and how did Suzy know her? Plot revisited

Emmerdale will revisit Holly Barton's death next week on the ITV soap, as one character reveals their secret link to the tragic daughter of Moira Dingle.

While it's not known if the plot or the connection is linked to Holly's death or her drug use, it does come about that Suzy Merton knew the character.

It also appears that despite her having died six years ago, Suzy doesn't seem to know that Holly is dead until she is told by pal Leyla Harding.

Leyla and Suzy were recently exposed to be taking cocaine together in secret, and it seems they've known each other for years.

Next week, it emerges Suzy also knew Holly and she is stunned to find out she is dead – but how exactly did they know each other, and is it drug related?

Who is Holly Barton and how did she die?

Holly Barton was the daughter of Moira Dingle, and sister to Adam and Matty Barton.

The character battled a drug addiction throughout her time on the show, but vowed to get clean with the help of her mum Moira.

Holly came between her mum and her partner Cain Dingle's marriage, with the pair splitting – while they did reunite after Holly's death.

The tragic character was found dead in her bed the morning after a wedding, and it soon emerged she had suffered a heroin overdose.

Moira and her family were desperate for answers and to seek justice against the person who gave Holly the drugs, but this was never really resolved.

How did Suzy know Holly?

It's yet to be confirmed how Suzy and Holly knew each other, while fans are already predicting it's through drugs.

Suzy is left stunned next week when she learns of Moira's daughter's death, before recognising Holly in a photo at the house.

As she rushes off, Leyla catches her looking at an online remembrance page for tragic Holly, and Suzy is forced to admit they knew each other.

She opens up about how they knew each other to Leyla, leaving her overwhelmed.

Holly Barton was the daughter of Moira Dingle
(

It's not clear where this plot is leading or what exactly happens.

However, Emmerdale producer Laura Shaw did tease earlier this year that Moira would have to face something from her past – so is this it?

She said in January: "On another side of the fence we’re also going to see something Moira thought was in her past and that she’d dealt with, come back to haunt her in quite a big way.

"The ramifications of that are going to affect quite a few people. And again we’re going to see her really tested to how she deals with that difficult situation."

Got any theories or thoughts on the storyline? Let us know in the comments section below