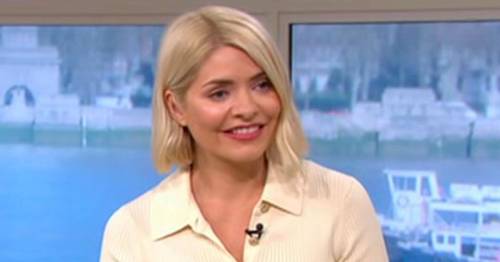 The 'Dogfather', Graeme Hall, has offered his top tips to This Morning ’s Holly Willoughby after she revealed her puppy problems on the show.

The TV show host has previously spoken out about her puppy Bailey’s aversion to walkies to vet expert Dr Scott Miller, but sought a second opinion from the behaviourist and trainer as he joined her on the ITV show.

Holly explained that golden retriever Bailey is "really lazy" and "very difficult to walk", with co-host Phillip Schofield joking: “You take her out for a drag don't you.”

“She just sits there and will lie down,” said Holly. “I end up carrying her, which I know is really bad. The only way I get to exercise her is if I take her to the dog park and let her off the lead where she runs around like a lunatic with other dogs.”

Graeme offered his expert opinion on the reluctant puppy, who seems to love her home so much, that’s where she wants to stay.

He said: “First thing Holly, be careful you don't over exercise her because with puppies their joints are susceptible when they’re growing. The rule of thumb that vets have used for donkey’s years is five minutes per month of life.”

The Dogfather – who is gearing up for a 43 date live tour this year – recommended encouraging and praising Bailey when she does walk.

“Any behaviour that you reward you always get more of,” he said.

“If you’re really struggling, Holly, pop her in the car and take her a street or two away from home and usually you find that when you’re walking them back to the house they’ll walk because that’s where safety and food and all the good things are.

"That then gives you something that you can praise.”

Other dog owners sent in their questions to ask advice from the trainer, including a viewer called Katie, whose American bullmastiff, called Luna, has become very clingy.

Graeme said: “This sounds like another kind of lockdown problem. This is really about building up independence and getting across to her that she can be on her own, and that people go and people come back.”

He recommended leaving the room and popping back in after Luna settled so she understands that her owners return, before slowly building up to leaving the house.

Deerhound owner Lyndsey was having trouble walking her two big dogs, and would have to walk them one at a time, adding "God forbid we see a cat".

The Dogfather explained: “Deerhounds are related to greyhounds which means they're sighthounds. No surprise that they see a cat and off they want to go and get it.

“I would practice this one dog at a time. You need the right bit of kit, the right technique and you might need a bit of professional help I think because they’re big, powerful dogs.”

The tips come as Graeme’s show Dogs Behaving Very Badly is back on TV, with episode two of the Channel 5 series airing on Tuesday night (January 11).

The show sees the behaviourist meet Frank the frisky French bulldog, and Harris the cocker spaniel who is addicted to swimming and ducks.

Previous : The Chase contestant reveals how to get through auditions and filming secrets
Next : James ‘Arg’ Argent looks slimmer than ever on Loose Women after 13 stone weight loss