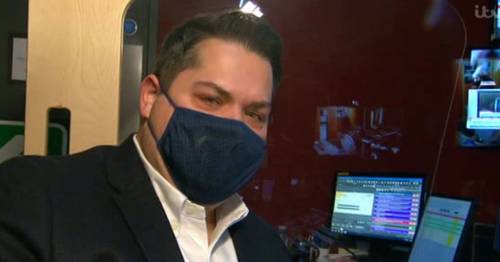 Good Morning Britain's director broke down in tears at the end of today's show as he quits ITV after 13 years.

Erron Gordon announced he was leaving in August and revealed in September that he would be joining Piers Morgan on his new show.

As Susanna Reid and Ben Shephard hosted GMB today, she pointed out: "All I can hear in my ear is someone sniffing, someone crying."

A camera was then pointed at Erron, who looked embarrased as he waved and said: "Sorry."

Ben asked: "How would you sum up the last few years, Erron. You can hear the count."

"I can," Erron said as he began to cry. "It's been incredible – yeah, an amazing bunch of people here. Very, very blessed to have worked here, thank you."

"One of the things you often used to moan about here was not getting a credit," Ben said. "You never got your credit at the end of the show, did you?"

Erron Gordon announced he was leaving in August
(

Erron exclaimed: "We don't do credits on this show, so!"

"Oh yes we do, Erron Gordon," Susanna said as his credit flashed up on screen. "Thank you for being there right at the start and huge good luck in what you do next."

"Thank you very much," he replied.

As Erron hid his face behind his paper, Ben continued: "Aw, we're going to miss you mate. Good luck! The door's always open as well!"

Ben and Susanna waved goodbye to the director
(

Announcing the news in the summer, Erron tweeted: "Personal News, After 13 years at @ ITV and 7 as the Series Director of @GMB I am leaving the programme at the end of the year to take on an exciting new challenge.

"I’ve had an amazing time working with a brilliant team in front of and behind the camera and I am so proud of the programme I helped launch in 2014.

Responding to his exit, Piers tweeted at the time: "The very best TV directors thrive off unpredictability, spontaneity & flying by the seat of their pants.

"Loved working with Erron because the more I tried to trip him up, the more he enjoyed it. A brilliant talent and ferociously loyal colleague & friend. Huge loss for @GMB."