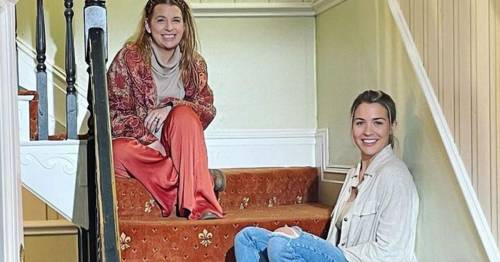 Gemma Atkinson has shared a first-look of her Hollyoaks return, following the news she'd be back playing Lisa Hunter after 16 years away.

The actress shared some snaps on her Instagram from the set during filming, posing in the very same house her on-screen family spent most of their time back in the day.

Chilling on the stairs and surrounded by filming equipment, Gemma confessed it all felt very different but also felt so familiar.

Sitting alongside friend and co-star Kelly Condron, who plays Zara Morgan on the Channel 4 soap, she revealed she was back filming, while her return storyline is yet to be confirmed.

Gemma Atkinson has shared first-look of her Hollyoaks return
(

She said: "Short but sweet visit back to playing Lisa Hunter in @hollyoaksofficial What a trip down memory lane.

"So different, yet so familiar. 22 years ago my career started at this place, on this set, in the 'Hunters' house.

"Forever Grateful for the wonderful memories, and for the fact there was no social media in those days – We’d all be screwed! #goodtimes #memories #friendsforever."

It's not confirmed when exactly the scenes will air, but it will be some point this year.

Since leaving the Chester-based soap, she's taken part in I'm a Celebrity… Get Me Out of Here! in 2007 and later played a recast Carly Hope on ITV soap Emmerdale between 2015 and 2017.

More recently, Gemma was a participant on Strictly Come Dancing in 2017, even making it to the final with her partner Aljaž Škorjanec.

Hollyoaks confirmed the return of Gemma and her character Lisa last November, with the actress also sharing her excitement.

It was confirmed it was a guest role, with her set for some dramatic scenes with Zara, who also recently made a comeback.

Posing alongside friend and co-star Kelly Condron, who plays Zara Morgan on the Channel 4 soap, she revealed she was back filming
(

They teased: "Since leaving Chester Lisa has found love with her activist boyfriend in Thailand, which is where she connected with old school friend Zara. But is there an ulterior motive behind her surprise visit?"

Gemma revealed all on her return, saying: "I’m thrilled to be popping back to Hollyoaks for a short time. It’s where my career began so of course, I was going to say yes!

"The cast and crew are so wonderful and although we have stayed in touch personally, it’ll be great to work together again professionally."

Hollyoaks airs weeknights at 6:30pm on Channel 4, with the next episode at 7pm on E4.

Previous : Couple with 37-year age gap tell trolls ‘love is love’ as they plan baby by surrogacy
Next : Emmerdale fans ‘rumble Priya will save Vinny and Manpreet’ from Meena after barn clue