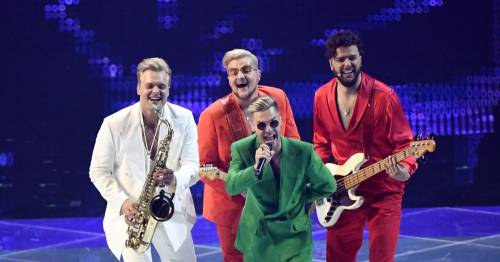 Eurovision 2022 is being surrounded by new fix claims after furious fans labelled the first semi-final as 'corrupt'.

As viewers excitedly tuned into the first instalment of the Eurovision semi-finals on Tuesday, they were left bitterly disappointed as they insisted that the entire show was a 'fix'.

Following the first semi-final, some unimpressed viewers have vowed to boycott the anticipated final this Saturday.

On Tuesday night, UK Eurovision hosts, Rylan Clark and Scott Mills were broadcasting live from Italy as they introduced the different acts representing each country.

After each country belted out their tune in the annual song contestant, some unimpressed viewers aired their grievances as they were left 'shocked' by the countries that got through to the second round of semi-finals.

Whereas others were left furious that 'better songs' missed out on reaching it to the grande finale on Saturday.

It wasn't just the viewers who were left shocked by the outcome though, as hosts Rylan and Scott also shared their disbelief over the fact the Netherlands was chosen over Albania, Latvia and Denmark.

As the hosts announced that the Netherlands was the last act to go through on the first night of the semi-finals, Rylan was heard saying 'wow' under his breath as he shared his disbelief.

"Netherlands are through, no Albania, no Latvia – maybe people aren't a fan of salads," he added.

"No Austria either. We have lost Denmark," Scott replied.

Rylan went on to list a selection of countries that had made it through to the final as he revealed his 'shock'.

"No Latvia? Nah, sorry fellas, that's a fix and I demand a recount. Ridiculous," one fumed.

Singer Stien den Holander, a.k.a. "S10" performs on behalf of The Netherlands
(

"The most dreadful Eurovision semi-final I've ever witnessed in all my years. It's so obviously rigged," another echoed.

"What's even the point of the Eurovision anymore, it's clearly all a fix. Albania should have made it through," someone else complained.

And a fourth viewer tweeted: "No Austria, Bulgaria or Denmark in the Eurovision final? Corrupt. Boycott the show. Enough said."

It comes as Ukraine remains the favourites to win song contest this weekend.

The second Eurovision Song Contest semi-final will air on BBC Three at 8pm on Thursday, 12 May.

Previous : Emmerdale spoilers for next week: Stunt fallout, racist attack and Suzy twist
Next : Emmerdale’s Gabby horrified as she comes face to face with stalker in gun showdown