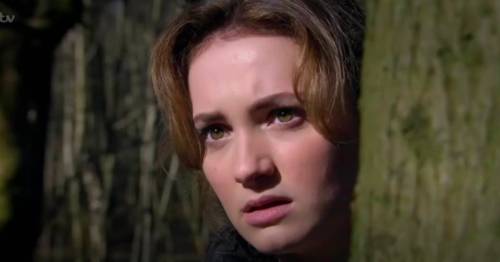 Emmerdale's Gabby Thomas came face to face with her stalker on the ITV soap tonight.

All week, Gabby (Rosie Bentham) has been getting increasingly concerned that Jamie Tate (Alexander Lincoln) – the father of her son – is back and is getting ready to take her son and her pride and joy away from her for good.

She was shocked when she realised Jamie was very much alive despite a deadly car crash, and was living with his daughter and her nan miles away from the Yorkshire village, and now she is convinced he is back and is getting ready to exact his revenge.

Gabby is convinced someone is after her
(

In tonight's episode, fans saw Gabby head to the woods armed with a gun as she warned Jamie she would fire at him if she saw him, as she vowed she would do absolutely anything to keep her child safe.

With the gun – stolen from Home Farm – Gabby was left stunned when she saw a movement, firing the gun at the person. It left her injured too and she collapsed to the floor with a head injury herself.

She stole a gun and tried to exact her revenge
(

When she came round, Gabby looked shocked as she realised there was someone lying lifeless on the floor in front of her. She looked terrified as she concluded it must be her stalker.

But is it her stalker or is it a case of someone being in the wrong place at the wrong time?

However, fans tuning into the soap will have to wait to see who the identity is – with many wild theories floating around online about the person's identity. Some are convinced it could be Joe Tate, whilst others are sure it must be Jamie.

Either way, both Gabby and the person are hurt – so will both, or either, of them make it out alive.

Gabby's sure her ex Jamie is back and ready for revenge
(

It comes after actress Rosie shared Gabby's genuine fear that Jamie is back.

Asked how her character feels, she said: "Her heart’s racing, she genuinely thinks this is Jamie. He could lash out at her because she’s got everything he wants, really. Her first reaction is to run as fast as she can out of these woods."

"It’s very obvious it’s from Jamie and that means Jamie has been in her safe place which is Home Farm. He’s been wandering round and he’s closer than ever. That tips her over the edge. She’s 100% sure Jamie is here, he’s been in the house, he’s coming for me. Now what do I do?" she added as she discussed the gift – a baby grow with the word's daddy's star on – left by Jamie in the house.

Previous : Eurovision 2022 plunged into fix row as fans claim ‘corrupt’ semi-finals were ‘rigged’
Next : 1 million have died from COVID in the US. Experts wonder how this seems normal.