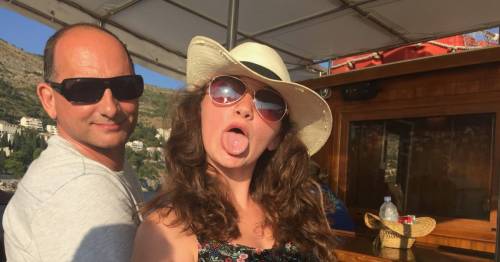 When life tragically mirrored her art for Rosie Bentham, Emmerdale was there to offer her ­support and stability.

Rosie, who plays Gabby Thomas in the Yorkshire Dales soap, was 15 in 2017 when her screen dad, dementia suffering vicar Ashley, died.

And just over two years later, Rosie’s father John, also a vicar, died of a pulmonary embolism – a blood clot.

Rosie, now 20, said: “I was doing the whole playing grief and then the next minute I’m actually grieving. Everyone was there for me and I had some time off. I had a text from the cast seeing how I was.

“Work was a saving grace in the sense there was something I still loved to do and was passionate about. Grieving can go wrong for teenagers.

Rosie as a girl with dad John
(

“People can rebel but that was never me. You think life is so unfair I don’t know why I am here any more. I knew I had work – something I loved and was passionate about and I got to work every day. Emmerdale 100% gave me stability.”

Since then, Rosie has gone from strength to strength as mischievous Gabby, who this week took a shot at a suspected stalker. The soap’s young mum has gone up in the world and is now living at Home Farm with the Tates.

Rosie has been favourably compared with ex-Doctor Who star Jenna Coleman, who played Jasmine Thomas for four years in Emmerdale, and Harry Potter star Emma Watson.

Jenna Coleman, who joined the soap as a teenager like Rosie
(

Rosie at the British Soap Awards in London
(

She said: “It’s so strange because Jenna Coleman started in Emmerdale aged 15-16 like me, in the Thomas family, like me, and now look at her. She’s thriving, so I’d love to go down that route. Would love to meet her.

“Emmerdale ­boosted her up so much and she loved it and that is where I’m at right now. That could be my vision.

“At the minute I am good, I am happy, Gabby Thomas is ­thriving. Very happy with my position.”

Another actress who inspires the young star is Line of Duty’s Vicky McClure who, like Rosie, is from Nottingham.

Rosie said: “I live in Nottingham with my mum and it will always have my heart. I love it here and I’m privileged to live in the nice area of Nottingham where my childhood was.”

And like Vicky, Rosie attended the city’s Television Workshop.

She said: “Their mission is to get you a job but also to bring out your character as a person and give you the confidence to go and do drama. If you don’t then fine, but Vicky was used as an example of someone successful in the business.

“She’s great. I watched her in Line of Duty and I’d love to play a detective in a police drama. I’ve not met Vicky, but I’m ­invested in where she is going. I’d say hi to her as I’ve heard that she is a really nice person.”

Rosie is close to her co-stars Daisy Campbell and Isobel Steele, and “very close to Mimi Slinger, all kind of my-age girls”. She has a holiday planned to Ibiza this year with Daisy and Mimi, and is looking forward to being ­“adventurous” while staying in San Antonio.

There has certainly been some ­on-screen adventure for Gabby who has gone from being a moaning village ­teenager to living at Home Farm with Kim Tate, played by Claire King.

Rosie said: I love working with Claire and feeling a little bit involved with the Tates. I’ve had a baby so I’ve ­settled in quite well I think.

“People come up to me on the street and they say you’re going to be the new Kim Tate and I say, ‘Yes I am!’ I hope she never moves out of Home Farm because I love being a little mini Kim Tate.

“Claire King is an icon. She is always there if I need anything or any help.

“In Covid a lot of scenes were two people – a lot of talking and lines to learn – and bless her, she gets twice as much as everybody else to have to say… she has a lot.

“Then I’d come in and say: ‘Oh Claire, I’ve had so many lines to learn that I might not be on it,’ and she helps me with learning lines because she is very experienced.

“All the directors love her – she’s great. Some people think she is scary. A very common question people ask is what is Claire King like? But that just shows her character.

“It’s a bit like me – when Gabby came in she was really feisty. She didn’t treat people very nicely at all and then people would meet me in the street and go: ‘Oh you’re ­nothing like her at all’.”

Rosie credits her parents for giving her the inspiration and drive to join the soap but, sadly, life mirrored art when she lost her dad John in August 2019, a week after her 18th birthday. There had been no symptoms to ­suggest there was anything wrong with the healthy 60 year old.

She said: “It was such a huge shock. I was on a ­weekend away, and when I got told I just couldn’t believe it because he hadn’t been ill beforehand.

“I got angry because I couldn’t ­understand why and how it had happened. I can remember saying: ‘No, no, no’. I would not wish losing a parent upon anyone. You don’t expect it until you are much older.

“My dad was very invested in my journey in Emmerdale just like my mum is now. I’m just glad he got to see me doing what I love and was part of it there behind the ­drama and experienced it as well, which is nice.

“During a later storyline I remember the director saying to me: ‘Gabby’s dad is dead – this is horrific for her’, and in my head I’m thinking, like, ‘I know.’”

Rosie says playing a young mum has definitely made her broody but she is too busy for romance. “I get to work with a baby now as well which is ­amazing. I look after my niece, which I love.

“Having a kid on the show did make me broody at the start ­because everyone finds kids cute, but there are times when the crying and changing nappies is not me and it’s not ­going to be me for many years to come.”

The Emmerdale star as a baby with dad John
(

Rosie is focused on her career and family and believes that working with adults as a teenager made her grow up quickly. But she does have some regrets about not going to university.

“Being 20 is such a weird age. I have all my best friends at uni not knowing whether they’re going to stick with their course or not, ­living the student life, and I’ve never really lived the ­student life.

“The only thing I’d miss out on at uni is the social, but then you’re paying however much for a social life it’s not really worth it.

“Right now I’m just on an up and would not want to jeopardise that by going somewhere else. I am still getting gripping storylines and doing stunts so why would I want to leave?”

Emmerdale airs weekdays at 7.30pm on ITV and the ITV Hub

Previous : Eurovision Song Contest voting system explained – and what time winner is announced
Next : Meet the women who are showing men the way in finale of TV’s gruelling SAS show