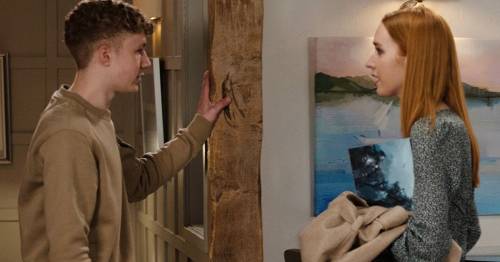 Emmerdale fans are convinced there will be a grisly twist in the Noah and Chloe drama.

The teenager has been stalking his love interest, going to extreme and warped levels to win her over, and now his crimes have finally been uncovered by Chloe – who quickly goes to tell everyone what she's been subjected to.

But in tonight's flashforward part of the episode, Noah was seen begging for his life as he appeared trapped. Whilst we don't know yet what fate he will receive, fans think the storyline might have finally met a grisly end as the exciting flashforward week continues.

He has been stalking Chloe, desperate to find out more information about her so he can win her over. He stole her keys and broke into her home in order to rifle through her room and learn more about her.

Noah hacked her phone and even recorded some of her conversations, as well as taking multiple snaps of her around the village and pictures in her room so he could learn best what she likes.

At the end of tonight's episode, the village – including Kerry and Al – learned what Noah was up to, as his mum Charity begged the family not to to go the police. As Noah plotted to disappear with the evidence – laptop – safely with him, Al was on the war path.

She confronted him over his stalking
(

He told Kerry that he was going to teach Noah a lesson, and now fans of the show have a theory about how it will all play out.

" #Emmerdale He's gonna wipe the laptop… goes without saying. No evidence will be found," one wrote.

A second added: "Noah will delete the evidence now ffs #emmerdale," as a third shared: "Noahs running away like a coward! That's what you get for stalking Chloe you weirdo!! #Emmerdale."

Noah's stalking got worse and worse
(

" @emmerdale Noah is clearly very unstable! The young playing him is doing a great job! #Emmerdale," a fourth fan penned.

Producer Laura Shaw has teased an exciting week ahead with some huge stunts never before done on the show, as she added: "I don't think we've done anything like it before – not in the 20 years that I've been at Emmerdale anyway – and we've had a lot of conversations and scratchings of head as to how we could achieve it. I remember us coming up with the story idea and we all sat in a big meeting room and I kind of pitched this idea and said, 'This is what I want us to do'.

"And I think everyone sat looking at me in stunned silence for about two minutes before everyone brilliantly just jumped in with a million brilliant ideas of how we could do it. In the end we had to build a very special prop, which we'll see in the episodes, to make the stunt work and how we need it to do it safely, of course."

Previous : Ryanair chaos as gran stopped from flying at airport despite having 3 months on passport
Next : Dan Walker steps in on BBC Breakfast as Sally Nugent fights back tears over Deborah James