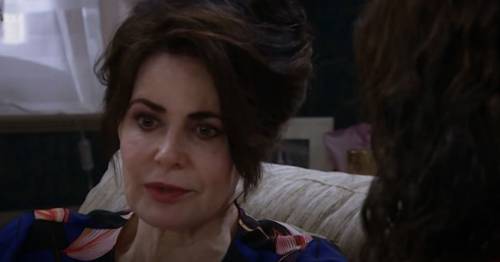 Emmerdale fans were left devastated after Faith Dingle decided to stop her cancer treatment on Monday’s instalment of the ITV soap.

The barmaid, played by Sally Dexter, has been secretly battling breast cancer and discovered the tumour has spread to her lungs and bones and is now terminal.

Faith has been undergoing chemotherapy to extend her life expectancy, but the toll of the harsh treatment became all too clear in Monday’s instalment.

After taking her anti -sickness medicine but feeling little respite from the chemo side effects, Faith sat down with daughter Chas to tell her about her decision.

She said: “I’ve been able to handle the nausea, after all it’s not my first rodeo.

The barmaid, played by Sally Dexter, has been secretly battling breast cancer
(

“But the exhaustion – that seems to be getting worse. I wouldn’t say no to a new set of lungs if they’re offering. Except it’s in my bones too.”

“I think the chemo is not for me, Chas. Not this time. The best it’s going to do is give me a couple more months. But at what cost? I think it’s time to knock it on the head, love.”

She then added: “That’s the trick of life, you see, knowing when to hold them and when to fold them.”

Many ITV fans noticed the line was a quotation of the song The Gambler, by Kenny Rogers, who similarly suffered from a prolonged battle with cancer.

Taking to Twitter, one fan wrote: “‘Knowing when to hold ‘em and when to fold’em’. Stealing a line from Kenny Rogers ‘The Gambler’. I see what you did there, Faith.”

Another tweeted: “Ok, who else ended Faith’s line from The Gambler song?”

“That’s the trick of life, you see, knowing when to hold them and when to fold them.”
(

In the episode, Faith continued: “I’m in the best place to be, nothing’s going to get better from here on in. I’ve fought this fight before don’t forget.

“I remember the relief when I got the all clear. No amount of chemotherapy is going to help, plus the fact it’s making me feel worse.”

Chas begged her mum to reconsider and even turned to Cain to convince Faith to change her mind, while ITV viewers were left heartbroken over Faith’s cancer battle.

One wrote: “Trying not to cry but it's hard,” as another tweeted: “I really don't want Faith to die she's just so lovely.”

Another wrote: “They shouldn't have killed off Faith Dingle,” as a fellow fan tweeted: “The absolute worse pain in the whole world when one of your parents are terminally ill.”

Previous : Olly Stephens – who was he and how were 13-year-old’s killers caught and jailed?
Next : EastEnders’ Slater sisters now as Jessie Wallace accepts caution after ‘cop attack’