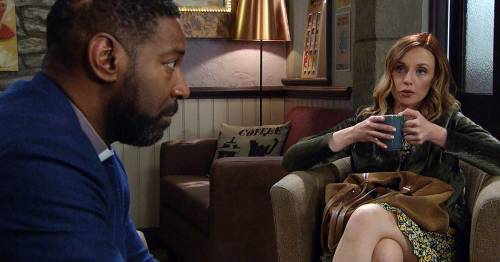 Emmerdale viewers are trying to work out which character will die, following the news at least one resident will be killed off in next week’s stunt week.

A whole group of characters will be left in serious peril next week at the survival challenge event, with twists and turns ahead.

Meena Jutla’s thirst for revenge and plot to murder love rival Victoria Sugden quickly spirals, and lives are left on the line.

Full details about what happens and why are being kept under wraps, with two huge stunts also being kept top-secret until they air.

What is known though is that a series of stunts will air, as events take a catastrophic turn.

Emmerdale viewers are trying to work out which character will die, following the news at least one resident will be killed off

Now, viewers are suspicious over who Meena might kill, while it isn’t known for definite that she will claim another victim – given all the other drama unfolding.

A scene this week saw Meena and Victoria clash over David Metcalfe yet again, with David also suggesting Victoria’s behaviour was weird.

So when she spoke with Wendy later on, she made a comment as she vowed to expose what Meena was up to – worried about David.

As Wendy warned her away from Meena, she said: "I don’t care and whatever she is up to, I’m going to find out even if it kills me."

Viewers feared there was some foreshadowing going on, and that this could be a huge hint at Victoria’s fate.

After all, Meena does attempt to drown her next week leaving her lifeless in the water.

But it isn’t just Victoria that has said something recently, that has been taken to be an eerie moment ahead of the danger on the way.

Charles Anderson told girlfriend Andrea Tate that he was worried he was going to lose her, after drama with his ex-wife last week.

Andrea was reassuring and promised the vicar that she was going nowhere, but fans immediately questioned what was ahead.

Could Andrea end up losing her life and unintentionally going back on her word? Or perhaps it's Charles who will be leaving Andrea, if he suffers a tragic fate.

No one is safe, with bosses revealing there’s danger in the icy water rapids, as well as a waterfall stunt and chaos in a maze.

Previous : This Morning fans slam guest who has boyfriend on speed dial to kill spiders amid phobia
Next : Mystery surrounds death of dad of murdered Brit student Meredith Kercher