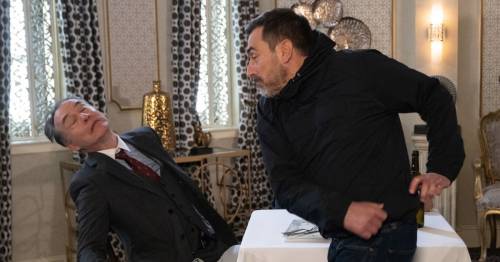 Emmerdale, EastEnders and Coronation Street all feature drama across ITV and BBC One next week.

But it's Emmerdale that is preparing for a huge week in the village, that could change the lives of characters forever.

A series of stunts and twists leave lives on the line – from a shooting, to a car crash and some big revelations.

Below you can find out what will happen on all three soaps this week, day by day, so you know exactly what is going on and when.

So whether it's the violent turn of events being lined up in Weathefield, the latest on EastEnders, or the deadly scenes to air on Emmerdale, we've got you covered with this daily spoiler guide…

Peter can't contain his anger when he finds out what Mr Thorne did, leading to an awkward confrontation.

Kelly finds Abi in Seb’s memorial garden, and George reveals that he suffers from sleep apnea.

Carla tries to make amends with Mr Thorne but she is shocked when he asks her to dinner.

Thorne offers to drop the charges against Peter and retire with immediate effect if, in return, he withdraws his complaint with the hospital.

Abi films Ben as he buys some drugs, but Ben clocks her. Abi gives Ben a choice, either he admits that Imran paid him to lie or she’ll share her video of him buying drugs with his boss and the police.

Peter calls the Gazette and asks them to run an article about Mr Thorne’s unethical medical practices – while he soon asks Aggie for her help too.

Summer tries to call Aaron but it goes straight to voicemail, and Tim lies to Sally.

Flashforward week begins, and Jacob appears to be in the frame for Chloe's recent harassment. Chloe suddenly suspects Noah might have been the real culprit all along, and soon finds worrying evidence.

Gabby is living in fear, and soon spots a hooded figure looming in the woods. Faith struggles to get Cain's forgiveness.

Cain and Al's feud escalates, with Cain soon speeding towards his enemy.

Gabby finds a gift for Thomas and believes Jamie has returned. A gun goes missing at Home Farm.

Charity walks in on Noah trying to trap Chloe in the house, as his stalking is exposed. Faith lashes out, as she struggles with her secret.

Charity is panicked by recent events with Noah, while Gabby fears for her and Thomas' safety – and soon gunshots are fired. But who has been shot?

Moira urges Faith to open up to her, as Faith's secret looks set to be exposed.

Gabby finds a gift for Thomas and believes Jamie has returned
(

Moira offers her support to Faith, but what has she discovered? Meanwhile a secret is guarded.

Cain and Al's feud leads to danger and lives on the line, while there's a body in the woods – but is the mystery character dead or alive?

It seems the car wreck could air in this episode.

The fallout to the dramatic week occurs, as all becomes clear and scenes play out in full.

Harriet is on a mission, while Moira issues someone an ultimatum.

Charity breaks the code – but does this mean one Dingle could be facing prison?

Janine feeling dejected by Mick, and Frankie is nervous about seeing Clara again so Nancy offers to join her.

Kat is annoyed when Sam joins her to visit Phil unaware that Sam has an ulterior motive.

Ben is unimpressed to see Callum’s police poster is up and things get worse when they later find it vandalised.

Kat is furious when Phil suggests she re-mortgages the cab office in order to buy Ruby’s.

Howie is excited to go on a date with Kim but soon realises she has got the wrong end of the stick.

Janine overhears Jada sharing her concerns to Zack about Linda being drunk around the children. Callum suggests to Ben that they spend some time together for their wedding anniversary but with the poster on his mind, Ben avoids him.

Later, Ben thinks he spots Rich and attacks him only to realise it’s the wrong person.

Zack gives Linda an ultimatum. Linda searches through Mick’s phone and sees that he has been researching intimacy issues.

With Sam’s threat hanging over her, Denise turns to Phil for help. At the salon, Denise is mortified to learn they have been robbed.

Kathy finds out from Jay about Ben's recent behaviour.

Kathy and Callum fume at Ben as he tries to defend his actions and shows no remorse. Lewis and Ben get drunk at Ruby’s and Ben comes clean about everything.

Stacey visits Jean but is taken aback when Jean begs her to get her out of the hospital.

Got any theories or thoughts on the current storylines? Let us know in the comments section below.

Emmerdale airs weeknights at 7:30pm on ITV, while EastEnders airs at the same time on BBC One on Mondays to Thursdays.

Corrie airs straight after Emmerdale at 8pm on Mondays Wednesdays and Fridays.