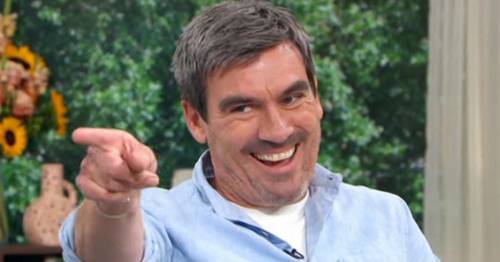 As the soap flashed forward in the latest episode, Cain faced a life-or-death situation, as he was shown bloody and unconscious at the wheel of a car that had flipped in the air before crashing.

Appearing on This Morning on Thursday in the wake of the shock scenes, actor Jeff Hordley sat down with Phillip Schofield and Rochelle Humes to discuss his character’s fate.

Jeff teased that his character was in “car chase jeopardy”, but then as the chat turned to the soap’s plans for its upcoming 50th anniversary, the actor seemed to let slip his fate.

He told Phillip and Rochelle that the cast are being kept in the dark on the Emmerdale plans for the celebrations, saying: “It’s being kept close to the chest of the producers.”

But canny Phillip used the upcoming festivities in October to push the line of questioning on Cain Dingle’s fate, asking: “You’re looking forward to that then?”

Jeff happily replied: “It’s going to be great, yeah,” after which Phil had his gotcha moment, saying: “So you’re not dead.”

Phil had his gotcha moment, saying: “So you’re not dead.”
(

Jeff then cracked up with laughter as he repeated the question, before Phillip exclaimed: “There’s no way they’re going to kill you!”

But Jeff then cryptically insisted “you never know”.

Phillip then said: “Emmerdale producer Laura Shaw confirmed “something big would happen that would change the dynamic between Cain and Al forever”.”

He added: “You can’t have a dynamic if one of you's dead.”

Jeff then resigned to the questioning, saying: “Correct, so she’s let the cat out of the bag there hasn’t she?”

Emmerdale has seen plenty of vehicle-related drama for Cain this week, after Al accused him of trying to sabotage his car by tying up the drive shaft.

Jeff previously teased what fans can expect from this explosive week on the soap, telling Digital Spy: “In this big week, Cain does come seriously close to no longer being here. We had fun shooting the scenes.

“We had a fantastic director, Suri Krishnamma, who's just the most fun and a very creative director on the show. I'm really intrigued to see what he does with the episode.

“It was written in a nice style with flash forwards and stuff like that. There's plenty happening in the episodes. It'll be really interesting to see what the finished product is.”

Previous : Lorraine Kelly distracts viewers from their breakfast in plunging silk dress
Next : Rebekah Vardy’s bid to protect reputation in trial ‘not going well at the moment’, says lawyer