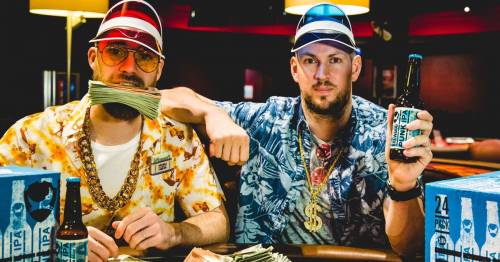 Getting a rejection on Dragons' Den may feel like the end of the road – but some go on to prove them wrong.

The Dragons may be some of the most talented business brains in the world and have enjoyed incredible success for nearly two decades of the show.

However, they don't always get it right and have been left kicking themselves after missing out on golden opportunities.

Some entrepreneurs have been ridiculed and told to give up on their ideas, yet fought back to make millions and get revenge on the Dragons.

Huge names such as BrewDog and the Tangle Teezer were overlooked but are now household names, while the investors also missed out on the most lucrative deal ever which would have seen them make £360million from a mere £100,000 investment.

Here are some of the business ideas that were rejected in the Den but went on to make a fortune.

The Dragons didn't want to hop on board with Trunki
(

Rob Law was left humiliated when he wheeled his way into the Den back in 2006.

The entrepreneur asked for £100,000 in return for a 10% stake of his company, Trunki, which had the world's first ridable suitcases for children.

Toddlers could pack, sit on and ride their Trunki while parents quite literally keep their kids in tow with a lead.

Rob has since admitted he still has nightmares about his pitch, which spiraled out of control when Theo Paphitis easily ripped one of the straps off.

"You shouldn't come here with problems that can be solved…it drives me mad that we waste our time with these things," exclaimed an angry Theo as he declared himself out.

Rob did actually get an offer from Australian businessman Richard Farleigh, but he was only willing to stump up half the cash for the same amount of equity.

After refusing to give up half of his company, Rob left the Den with nothing as Richard walked away from the negotiations.

Now you'll struggle to go to an airport without seen a child using one of these suitcases and a Trunki sold every 3.5 minutes in 2008.

Three years after visiting the Den, Rob was reunited with Theo, who admitted his kids always point out Trunkis to him but revealed his fears over cash flow.

Rob went on to get his colourful carry-on hand luggage in tonnes of retailers, including John Lewis, selling his products in over 100 countries worldwide and reportedly turned over £9.5million in 2018.

They have also diversified their product range, which now includes a rucksack which transforms into a booster seat.

Shaun Pulfrey was the brains behind the Tangle Teezer
(

Shaun Palfrey got tied up in knots when he faced the Dragons in 2007.

The self-confessed unconventional thinker, who spent 30 years working in top salons as a colourist, pitched his Tangle Teezer product in the Den.

The unique detangling hairbrush solved the problem of hair tugging, pulling and causing pain, but he struggled to show it off during the demo.

Shaun had a really bad hair day as his plastic model head kept wobbling and mortifyingly one of his combs snapped.

The inventor was willing to give up 15% of his business for an £80,000 investment – but the Dragons gave him the snip.

The Tangle Teezer is now a nationwide favourite
(

The Dragons had no confidence in Shaun's business acumen and all rejected his proposal.

Not willing to be defeated, Shaun remortgaged his flat and used savings to get his product into Boots,

He sold 35,000 brushes in the first year and managed to get them into famed salon chains such as Toni & Guy and Regis before selling them across the world.

Two years after his Den visit, Duncan visited Shaun at one of his salons and admitted this is "the one that got away".

"I do think we gave Shaun too hard a time in the Den," confessed Duncan. "I think Shaun's products and other he has invented have got the potential to make a lot of money."

The Dragons must all be pulling their hair out now as the company is worth an astonishing £65million and has been endorsed by many celebrities such as Cara Delevigne and Victoria Beckham.

The Dragons didn't drink in Cup-a-Wine
(

Who wouldn't want to buy a win glass with the booze already inside?

The entrepreneur wanted £250,000 for 25% of his business and revealed each goblet costs him 38p and he sells to wine brand owners for 52p to distribute.

However, the Dragons were concerned about copycat rivals stealing sales away and were not convinced by the soundness of his patent application.

Duncan asked: "You didn't invent the plastic glass. And you didn't make the wine. So what have you got?"

A year on, James got a cash injection from a private investor at the rate he wanted and secured a deal with M&S.

They launched Le Froglet wine nationwide to general acclaim and the business is now worth millions.

The Dragons weren't actually to blame for this one – as it's the producers who will want to drown their sorrows.

BrewDog co-owners James Watt and Martin Dickie turned their beer brewing company into an international bar franchise without the help of the Dragons.

Shortly after starting their company 13 years ago, the boys applied to be on Dragons’ Den and got through the initial application process.

They were selected for a screen test – offering the celebrity investors a 20 per cent stake in return for a £100,000 investment.

The pair pitched their hearts out but they claim show bosses decided it wasn’t good enough and sent them home without ever facing the Dragons.

"They thought our business wasn’t a good-enough investment proposition for the Dragons and that BrewDog was not unique enough, special enough or with enough growth potential to make the grade and appear on the show," they explained in 2018.

"So at the last minute it was decided that we would not get to pitch our business to the Dragons.

"It was a huge kick in the teeth for us at the time and that stinging rejection still burns today."

Keir Starmer is a fan of the pints
(

It has proven to be a woeful decision, as that investment of £100,000 for a fifth of the business would now be worth a whopping £360million.

They added: "It would have been by far the most lucrative investment not only in the history of Dragons’ Den but pretty much in investment history overall."

Despite how much the setback hurt at the time, James and Martin are actually pleased they were rejected as they created a finance model that lets customers own part of the company.

They said the producers also claimed they weren’t good on TV and would not be able to present a televised pitch well.

But the pair would prove them wrong by going on to move into TV with their own US TV show BrewDogs and launched The BrewDog Network – a streaming service featuring beer and cooking series, game shows and documentaries.

The producers must be wanting a stiff drink right now.

The Dragons should be sent to jail without passing go and collecting £200 for this lapse in judgement.

In 2004, Rachel Lowe wanted a £75,000 investment from the Dragons for her new board game, which was based on being a black cab driver.

The Dragons decided they didn't want to roll the dice and was told: "It doesn’t seem like you’ve prepared very well to come in front of us today," after fluffing some of her figures.

Doug Richard was harsh on Rachel as he told her: "We can’t even have a basic business discussion.

"It doesn’t seem like you’ve prepared very well. You remind me of a lamb to the slaughter in some ways."

At that stage Rachel already had a deal with Hamley's but it still wasn't enough to receive any investment.

It didn't matter in the end as Hamley's launched Destination London and it became its best selling game that year – even out selling the mighty Monopoly.

Rachel has now launched a staggering 21 different varieties of the game and got The Queen's approval as she was awarded an MBE for services to business in 2009.

She also now has a current net worth estimated to be £96million.

The Dragons didn't want a slice of Hungry House – but they could have feasted on millions.

Shane Lake and Tony Charles presented their idea for an online takeaway order and delivery service back in 2007.

They actually secured an offer of £100,000 from James Caan and Duncan Bannatyne in exchange for 50% of their business but the deal fell through during post-show negotiations.

However, this worked out pretty well for the lads in the end.

They managed to raise £150,000 from other investors and in just three years they increased their restaurant partners from 150 to 2,500.

The company was bought by German food ordering giant Delivery Hero in 2013 then sold to Just Eat in 2016 for a whopping £200million.

That's going to leave a bitter taste in the mouth of the Dragons.

Oppo is a delicious hit
(

Brothers Harry and Charlie Thuillier didn't get an investment from the Dragons back in 2016, but didn't put their plans on ice.

They were told their low-calorie and "guilt-free" ice creams, which have fewer calories than a large apple, were too risky an investment.

They wanted £60,000 for a 7% stake in their business, but got told by Moonpig founder Nick Jenkins: "The reward doesn’t justify the risk."

However, the lads had a series of crowdfunding attempts and now have 538 investors, including tennis champion Andy Murray.

They have also won the backing of Richard Branson and their ice cream is now stocked in over 1,300 stores including Co-op, Holland & Barrett and Waitrose.

Natalie came in with her dog bowl
(

The Dragons were barking mad to let this one escape.

Back in 2008, Prestige Pets founder Natalie Ellis came into the Den with her Road Refresher Bowl.

The concept was simple, a portable bowl for dogs that doesn't spill and can be taken out for long walks and road trips.

Natalie wanted £120,000 for 15% of her business – but unfortunately none of the Dragons threw her a bone.

The businesswoman took her own lead by going to Chicago and made her business a success across the pond – raking in her first million back in 2010.

She even claimed former President Barack Obama got his paws on one of her bowls for his pet pooches.

The Dragons must have spent the night in the doghouse after letting this one run away.

The Dragons didn't have the stomach for Approved Food.

Founders Dan Cluderay and Andy Needham had the idea of selling out-of-date food to savvy shoppers so a family could knock huge amounts off their weekly shopping bill.

They were willing to give up a 10% share in their business for an investment of £150,000 but the Dragons were having none of it.

After being rejected, the former market traders came runners up in the 2015 Virgin Media Pitch to Rich competition and secured a £100,000 marketing campaign.

That year they were receiving a whopping 3,000 orders a week and making a turnover of £4million a year.

It's enough to make a Dragon feel sick.