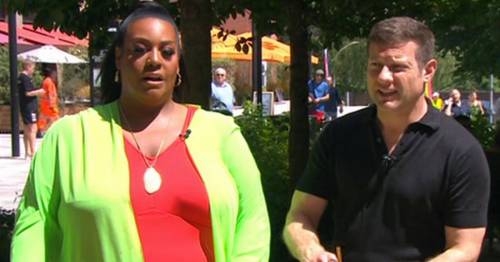 This Morning presenter Dermot O’Leary was on the receiving end of a savage jib on Friday’s episode of the ITV show, as chef Phil Vickey was in the kitchen.

The entire ITV morning show was held outside the studio on Friday as temperature soared above 30°C and Phil appeared on the show to prepare frozen desserts.

The presenters shared what their plans were for the hot weather, as Alison said she had an awning in her garden next to a barbeque grill where she cooks sausages.

Phil then asked Dermot what he was planning and he made a diving motion, indicating he was going to go swimming.

He said: "I was down at the ponds yesterday," before Alison asked if he was going to go today.

The presenters shared what their plans were for the hot weather
(

Phil then savagely quipped: “Does your butler bring you your drinks or…?” leaving Dermot slightly chastened.

He then joked: "I've given him Friday off. It's an absolute disaster."

Taking to Twitter after the awkward exchange, one This Morning viewer commented: “Butler oh the shade Phil the shade,” as another savagely wrote: “Some presenters get better with time. And then there’s Dermot…still winging it …”

This comes at the end of a busy week on the ITV show, which saw Phillip Schofield and Holly Willoughby left gutted as they opened a Blue Peter time capsule from 40 years ago.

The presenting duo led a segment on the time capsule, which was buried on the BBC show in 1981, some 41 years ago, but they were less than impressed with the contents when it was opened in a little ceremony on the show today.

Phil then asked Dermot what he was planning
(

Phillip and Holly had been building up to the exciting contents in the time capsule, as they chatted with a Blue Peter legend about what they were expecting to be in there – but they were left sorely disappointed.

They had expected to find tapes of the Blue Peter theme tune, as well as clips from the show and even a script from that very day on Blue Peter. But instead they were met with a mess of brown stuff.

"I feel like a spider's going to come out of there," one of them said, as they all leaned in to look what they found. The studio descended into laughter as the camera panned to what was inside the box.

Holly held her hand over her nose and mouth because of the smell whilst Phil surveyed the box.

"Well look at that," he said, showing the camera the box as Holly quizzed whether one of the Blue Peter dogs had put something into the box before it was closed over four decades ago.

Later on in the show, it was explained what had happened to the box. The metal lining in the box had corroded and attacked everything inside, but they did manage to rescue some crisp wrappers and sweet wrappers of the day and there was also a disc of a recording of the original theme tune for Blue Peter – but it was unlikely to be playable.

Previous : The full list of benefits that WON’T get £650 to help with cost of living
Next : Love Island’s Davide dumps ‘liar’ Ekin-Su with heartbreaking final words