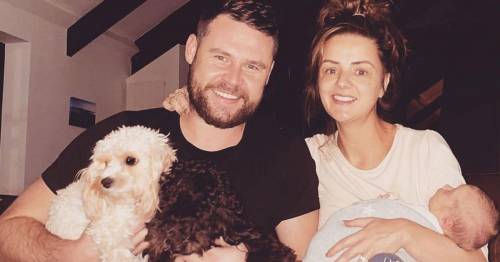 Danny Miller 's fiancée said he struggled with whether to do I'm A Celebrity… Get Me Out Of Here! just four weeks after their son Albert was born.

The Emmerdale star became a dad for the first time in October, and despite just giving birth, Steph Jones said she fully supported Danny’s decision to go into the Welsh castle.

The actor, who plays Aaron on the long-running ITV soap, agonised over his appearance on the hit show because he was hesitant to leave his new family.

During Monday’s episode of Lorraine, Steph discussed her partner’s decision to take part in I’m A Celebrity, and said that after intense family discussions, he finally came round to the idea.

“We've just spent two weeks in isolation together ahead of the show and I think we feel quite privileged he got asked to be a part of the show because it meant we spent so much quality time together before he went in,” she said, as she was holding baby Albert in her arms.

She said Danny had always wanted to appear on the show, hosted by much-loved telly duo Ant McPartlin and Declan Donnelly, and she had to persuade him to take up the offer.

“It was a really difficult decision for him to decide whether to do it being so close to the birth, but actually, when we sat down and discussed it as a family, it's such a massive opportunity – the biggest show on the telly,” she explained.

“He's always wanted to do it, it's his favourite show to watch,” Steph added.

And when asked if Albert would look back proudly on his dad taking part in the beloved ITV show, Steph joked: “I hope he's going to be a bit braver than his dad.”

Viewers were left disgusted following Danny’s confession that he had swallowed “mouthfuls” of sick while in the helicopter on the way to the celebrities' first challenge in Wales, and Steph revealed her beau has never been one for heights.

“He doesn't like rollercoasters though. We go to a theme park with our nieces and nephews, I go on the ride and he watches,” she quipped.

Danny will be competing in Monday night's eating challenge

But it’s his weak stomach and strong gag reflex that has her concerned, especially as she’s been picked to take part in Monday night’s first Bushtucker Trial, the Dreaded Diner.

“This was the trial he was dreading the most because he has got a very, very bad gag reflex,” she shared. “He gagged over Albert’s nappy in isolation. He did one particularly bad one and he was gagging – he had to run out of the room.”

She also revealed he was almost sick after trying a seafood dish on holiday one year.

“We went on holiday to Lanzarote and he decided he was going to try and test himself – he ordered some battered squid. One bite, he was retching,” Steph laughed.

Previous : Holly Willoughby was ‘constantly embarrassed’ at school because of being dyslexic
Next : Keir Starmer vows Labour is ‘party of business’ as he sets out new Brexit plan