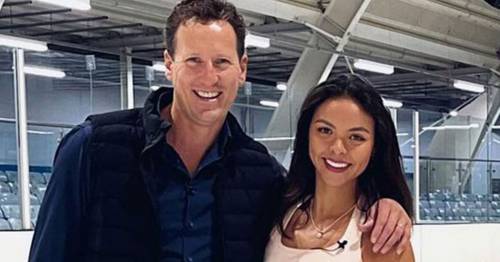 The professional skater took to Instagram to share footage of the painful looking cut on her back where Brendan’s blade had caught her skin.

Sharing a short video clip with her 199,000 followers, Vanessa lifted up her hair to reveal the injury and said: “So my back just got sliced.”

“Got @brendancoleinsta’s blade in my back. @dancingonice really is a bit dangerous,” she added in the caption, alongside a woozy face emoji.

The video then cut to a sad-faced Brendan who says: “Bad Brendan” to the camera.

Brendan Cole with his Dancing On Ice partner Vanessa Bauer
(

Earlier Vanessa revealed her and Brendan had changed their practice venue and were rehearsing at London’s Alexandra Palace ice rink, which is pretty to visit especially at Christmas time.

Sharing a skyline shot of the capital from the hillside venue, the 25-year-old wrote: “Nice change of venue today.”

“After party morning skate with @brendancoleinsta,” she added.

This was in reference to the fact the pair were partying at ITV’s Palooza event last night alongside stars such as Holly Willoughby, Laura Whitmore and Emily Atack.

He said he'd been a 'Bad Brendan' in the video clip
(

Brendan is a former professional dancer who appeared on the BBC ’s Strictly Come Dancing from 2004 to 2018.

But just last week he was in the wars himself after taking a tumble on the ice during training, leaving partner Vanessa concerned.

Footage of the 45-year-old’s fall was shared by the ice skater, who won Dancing On Ice with singer Jake Quickenden back in 2018.

One video, accompanied by the caption "oops," shows them trying a lift before Brendan appears to lose his grip on the ice and slips.

This sends them both to the ground, with a concerned Brendan heard checking that Vanessa is alright.

In a second clip, Brendan seems to lose hold of his partner and Vanessa falls down. She teased "another one" in the caption, adding: "This Dancing On Ice thing is not easy!"

Neither appeared to be harmed by the accidents and were later seen on her social media excitedly arriving in Liverpool, where they're understood to have since trained.

Brendan Cole slams to the ground with Vanessa Bauer during training
(

Dancing On Ice returns to TV in early 2022 and bosses will be crossing all their fingers and toes that it won't be as chaotic as 2021's very messy series.

Returning to the ITV skating show are hosts Phillip Schofield and Holly Willoughby. While Ashley Banjo and skating legends Jayne Torvill and Christopher Dean will take their seats on the judging panel.