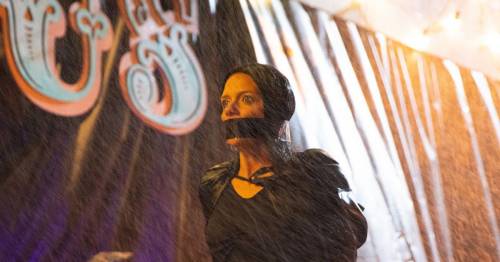 She previously stood up to evil Harvey Gaskell, bravely giving evidence against him in court when he forced her and son Simon to become his drug mules.

But when Harvey deliberately injures himself in prison and demands to be taken to hospital so he can escape, will he finally get his revenge?

In what promises to be a deadly week on Corrie, a chilling new trailer shows Harvey break free from a prison van.

The Halloween themed clip shows a horrified Leanne, who is dressed all in black, lock eyes with Harvey as he enters the bistro.

Viewers next see Leanne tied up and gagged – so is this the end or will she be able to escape Harvey's murderous clutches?

Leanne is seen tied up and gagged after running into Harvey
(

Leanne, played by Jane Danson, has always been feisty so it’s unlikely she’ll go down without a fight.

Viewers will have to watch to find out if it’s her or Harvey who loses this battle.

But before he even gets to Leanne, Harvey is causing more trouble.

Harvey escapes from prison and is out for revenge
(

The prison van he is travelling in crashes into the Alahan family car with Dev and his kids, Aadi and Asha, inside.

Dad Dev is forced to choose which of his twins to rescue first as both are unconscious, with Aadi slumped in the front seat and Asha in the back.

As he pulls Asha out the car, it suddenly bursts into flames and explodes with his teenage son still inside.

Viewers will have to wait to see if Aadi pulls through.

In other dramatic scenes filmed as part of ITV’s Super Soap week, Abi is also back on the street and hellbent on getting revenge on Corey for killing her son Seb.

After a jury found Corey not guilty of Seb’s murder, she is taking matters into her own hands.

She meets up with Seb’s father, Tez, who gives her a gun – and it seems she’s determined to use it.

A distraught Abi goes in search of Corey, but with everyone wearing Halloween masks it takes her a while to find him.

In other dramatic scenes Corey pulls a gun on Abi
(

When she eventually confronts him and prepares to pull the gun on him, the ground suddenly gives way opening up a huge sinkhole on the cobbles.

First look photos show Corey then pointing the gun at Abi as she lies defenceless on the ground. But will he shoot?

With rain pouring down and the water beginning to rise in the hole around them, will they ever make it out?

Will Jenny and Johnny survive after falling into a sinkhole?
(

Elsewhere estranged couple Jenny and Johnny have also fallen into the sinkhole which is fast filling up with water.

The trailer ends with the words “watch your back” leaving viewers unsure who will survive.

Coronation Street Producer Iain McLeod said: “We set out to make a week of breathless, brilliant drama – and boy, have our outstanding cast, crew, design team and writers delivered!

“The week is jammed packed with twists and turns and astonishing visual spectacle. It also has heart, heroism and humour in the most unexpected places.’

Previous : This Morning caller horrifies Holly Willoughby as she details husband’s ‘sick’ cheating
Next : Ex-SC sheriff off to prison on 1-year misconduct sentence