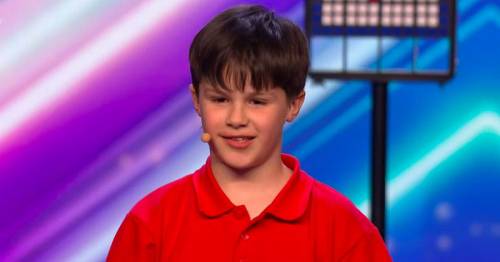 Britain's Got Talent viewers were quick to question one contestant's magic trick as they tuned into the latest episode of the ITV show.

Ryland Petty took to stage and quickly invited judge Amanda Holden up on stage to participate in his audition.

The youngster asked Amanda to pick a piece of paper out of a box and had previously explained that each piece of paper inside the box had various different emotions written on them.

As Amanda sat down at a table, Ryland gave her a Rubik's Cube and asked her to play with it as he invited his friends from The Magic Circle Young Magicians' Club onto the stage with their own Rubik's Cubes.

As each of the participants placed their cubes in a framework, nine-year-old Ryland waited to the end to ask Amanda to place hers in there too before asking her to confirm which word was written on the piece of paper she had picked out.

As Amanda replied: "Love,", Ryland turned the framework around to reveal all of the Rubik's cubes had matched up as a red heart against a white background.

He then used his hands to gather up some smoke on the table that he and Amanda were sat at, and pulled a table cloth away to reveal the word 'LOVE' written in black.

"How on earth did he do that?!" host Ant McPartlin asked as Simon Cowell said: "I am speechless!" before comparing Ryland to Harry Potter.

However, some BGT viewers weren't overly impressed with the magic trick and were quick to question it.

"#bgt guarantee all the pieces of paper said love," one person claimed on Twitter.

Another person posted: "Any piece of paper could have had love written on them… #BGT."

A third viewer asked: "Only thing is, what if all those pieces of paper said love on then? #bgt #britainsgottalent."

And a fourth person posted: "I'll bet all the other bits of paper had "love" written on them too. #BGT."

A fifth added: "Ummmm can we look at the pieces of paper. Do they all say love? #BGT."

And another viewer asked: "How we know all those pieces of paper didn’t ay love lool #BGT."

However, some other viewers tuning in at home were quick to praise Ryland with one person tweeting: "Wow I have no word that kid was AMAZING #BGT X."

Another said: "Mind blown…That was awesome!!! Well done by Ryland…#BGT."

And someone else posted: "OMG & OMG @BGT that was outstanding , my imagination is speechless Magic at its best #BGT."

Britain's Got Talent continues next Saturday on ITV from 8pm.

Previous : John McEnroe tells Emma Raducanu what she must do with coaching team ahead of French Open
Next : Britain’s Got Talent viewers gobsmacked as ‘Rick Stein’ auditions as epic guitar player