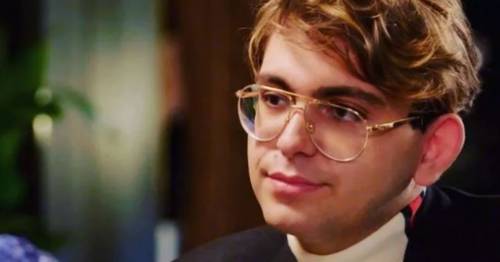 Lord Alan Sugar has been unimpressed so far with his group of 16 eager candidates hoping for a £250,000 investment and to become his business partner.

All have credible business experience, but several are no stranger to reality TV.

In fact, some might be familiar faces to viewers.

Amongst the group of fame-hungry stars include former contestants on dating shows and even a Bear Grylls survival show.

G et the news you want straight to your inbox. Sign up for a Mirror newsletter here .

Navid Sole is a pharmacist who has come from huge wealth

Pharmacist Navid Sole was on the losing team in the first week but managed to dodge Lord Sugar's firing finger.

He insisted his customers come to his pharmacy to see him, rather than to get their medication.

But Navid, whose parents are millionaires, has actually been on telly several times.

In 2018, he appeared on an episode of courtroom reality show Judge Rinder, which he wrote about on Instagram in a now-deleted post.

"I had such an amazing time filming @judgerinder," he wrote, according to MyLondon.

Navid's ex said she only saw him as a friend, but he thought they'd been in a relationship for four years

In 2019, Navid was back on our screens as starred on Rich Kids Go Skint, where wealthy people were paired up with families much less fortunate, and learnt about what life was like for them, learning how to carry out household tasks and how to budget.

He learnt how to cook on the show, admitting everything was usually done for him by a maid.

Meanwhile, last year, Navid gave reality TV another crack and appeared on Eating with My Ex, a show where former couples sit down for dinner together and discuss their relationship in excruciating detail.

Navid met up with ex Charlotte – but she revealed during their chat she'd never even seen him in a romantic way.

He claimed they had been in a relationship for four years and was shocked to hear she only saw him as a friend.

"I never saw you as a boyfriend," Charlotte told him.

Navid replied: "I genuinely thought we were in a relationship."

Charlotte told him: "It was four years of us going out twice a month. We didn't talk every day.

"I’ve not kissed you, we don’t hold hands, we don’t do anything. I don’t see you like that anyway so nothing will ever happen."

Kathryn Louise Burn has already been on our screens
(

The Apprentice is not Kathryn's first stint on reality TV.

Back in 2017, when she was working as an events manager, she starred on The Island with Bear Grylls, a gruelling survival show where groups are abandoned on desert islands in the Pacific.

But she went by a different name – Kaggy – at the time.

The show has sparked controversy for putting animals on the island who were killed in agonising ways by the contestants, who also ate an endangered breed of crocodile.

Kathryn's bio read: "Self-confessed social media addict Kaggy wants to be taken completely out of her comfort zone and have a once in a lifetime experience without her phone.

Kathryn went by Kaggy at the time
(

"Determined to take on the challenge of The Island with Bear Grylls, she said, 'I’m more capable than people think I am.

"'I want to prove that to other people and myself.'"

Posting about appearing on the show – filmed on The Pearl Islands in Panama – at the time, she shared on Instagram : "Yippeeeeeee I can finally announce that for those that didn't know, guess or hadn't seen me in the trailers yet (!!)… that I was given the most INCREDIBLE once in a lifetime opportunity to take part in The Island with @beargrylls, Series 4 (I still can't believe it)!!!

"So excited and lucky to be part of such an amazing show with such a great production team and cast".

Amy previously appeared on The Bachelor

Amy wowed viewers when she revealed she is a voiceover artist who has sung more than 500 jingles including those for Coca-Cola, My Little Pony, Connect Four, Burger King, Boohoo.com, and McDonalds.

She voiced Rainbow Brite in the Macy’s Thanksgiving Day Parade and was featured on the Cabbage Patch Kids records.

But Amy has not only lent her voice – she has also starred in front of the camera on the first ever series of The Bachelor back in 2002.

Then 28, Amy was one of the singletons hoping to walk down the aisle with eligible man Alex Michel, a then-31-year-old management consultant from Virginia.

Sadly, Amy didn't tickle his fancy and she was eliminated in week two.

But now, US-born Amy is hoping for an investment in her beauty brand.

* The Apprentice airs Thursdays at 9pm on BBC One