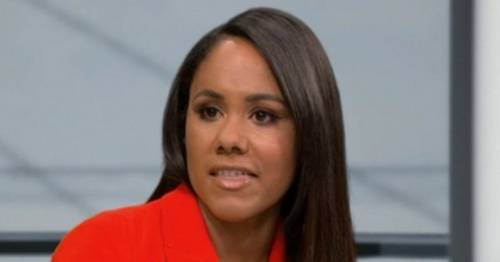 Alex Scott was visibly emotional on-air after Christian Eriksen received CPR amid the UEFA Euros 2020 game between Denmark and Finland.

Danish midfielder Eriksen, 29, collapsed during the game and medics rushed onto the football field to deliver CPR to the footballer in distressing scenes.

Eriksen's wife arrived on the pitch and was comforted by his teary teammate Kasper Schmeichel.

The Finnish players and match officials went on to leave the field as the game was then postponed.

After being rushed to hospital, Eriksen is now awake and stable, with The Denmark FA releasing a short statement, saying: "Christian Eriksen is awake and is for further examinations at Rigshospitalet. The match is temporarily postponed."

In the debrief after the match on BBC One, presenter and former footballer Gary Lineker discussed the horrific event with commentators.

Gary said: "That was one of the most distressing scenes I've seen at any football match."

He added that all players on the field were clearly "distraught" and that football was "truly put into perspective".

Speaking to Alex, Gary joined hopes for Eriksen's wellbeing, with Alex saying "I'm already getting emotional…I think everyone watching at home…like you said, Gary, I think football goes totally out of the window right now.

"You're thinking about his family, all the rest of the players out there witnessing it."

She revealed: "I just got my phone and messaged my mum to tell her I love her. It's a reminder that things can change like that."

The presenter and former England footballer was visibly upset as she spoke as the other commentators discussed the sad situation.

She later added: "The reaction from players, from fans, but all we can do…is sit here and hope he'll pull through this."

The other commentators present – Cesc Fabregas and Micah Richards – shared their well wishes for Christian’s recovery and hoped he would get well soon.

The situation was compared to Fabrice Muamba suffering cardiac arrest during a televised FA Cup match in 2012 between Bolton and Tottenham Hotspur, from which Muamba later recovered.

*The Euros 2020: Denmark v Finland aired on BBC One and is available on BBC iPlayer.