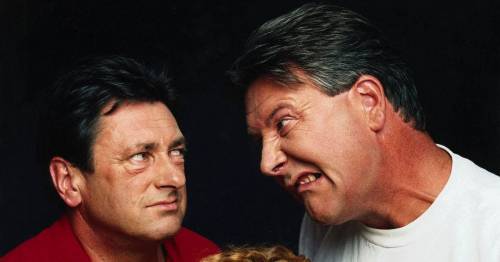 Ground Force was the family friendly gardening show featuring a trio of experts who became best friends – but that didn't stop one blazing row.

Running for a whopping 12 series between 1997 and 2005, Ground Force saw the team trying to transform a rubbish garden into a backdoor paradise in just two days.

"When we first started filming we were polite to each other for the first two series but by the third series we were like family," explained Charle to Hello! magazine in June.

"My main memory of Ground Force was laughing lots. It was the same team week in, week out, as well as the same production and crew. You know what it's like when you work with a team of people and you get on."

They loved each other most of the time
(

While the three main stars have remained close friends, there were times when they didn't exactly see eye to eye.

During one heated exchange in 2000, the usually mild-mannered Alan reportedly lost his rag while planting beds in a garden in Pitsea, Essex.

"Call me picky if you like but I like my Ground Force gardens to be pristine when we finish them," he told Radio Times. "I do not get a thrill from seeing them covered in dandruff."

While the pair did manage to put the incident to one side, it did get a bit tense for a bit as they were both left reeling.

"For a while it did get a bit hairy," said Tommy. "But when we'd both calmed down we actually kissed (yes) and made up. What made me cross was that I was working flat out to get everything ready and here was Alan moaning about a bit of stray sawdust."

Charlie, Alan and Tommy were friends on and off-screen
(

According to Alan, the one good thing to come out of the heated exchange was that it silenced their fellow host Charlie for a few moment.

"She just kept her head down and fiddled with her water feature," he added.

But they quickly put the incident to one side and remain friends to this day despite going off in their own separate directions.

To the dismay of many Ground Force fans, Alan announced he was quitting the show in 2001 after doing enough episodes.

But he stayed involved with many BBC gardening shows and had spells presenting Songs of Praise and on BBC Radio 2.

The gardening expert also has many other talents, including a sensational singing voice which stunned All Star Musical viewers in March 2019.

Most recently, Alan has been back on our screens in Love Your Garden – with his makeover team helping those in need.

Tommy continued in the showbiz world and went on to host what seems like hundreds of his own TV shows.

He also had a small acting role in the film One, writes DIY and gardening books and has his own DIY brand that was sold in Poundland.

Last year, Tommy joined the presenting team on daytime favourite Homes Under The Hammer and now he is host of BBC series Clean It, Fix It.

The Ground Force gang are still in touch
(

Once Ground Force ended in 2005, the gardening pro presented shows such as The Joy of Gardening and Charlie's Garden Army as well as a gardening slot on American TV station CBS.

In a surprising move, she made a cameo on Hollyoaks in August 2002 as a special guest booked by Gordon Cunningham to unveil the Jubilee Gardens.

Charlie also appeared on Celebrity Masterchef in 2006, was President of the Television and Radio Industries Club (TRIC) from 2003 to 2004 and now hosts BBC series Garden Rescue.

Earlier this year, Charlie explained that she is still in contact with her former Ground Force colleagues.

"I haven't seen them recently, but we're still in contact. Occasionally we chat or bump into each other," she told World of Cruising:

"Tommy teases me that we're getting old now, which is true, but we have loads of happy memories of filming – lots and lots of laughter."