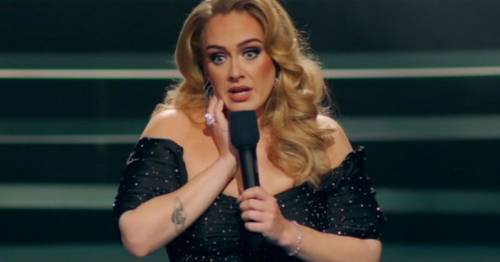 Adele revealed she was 'ready to go to jail' after being pulled over by a police officer in America, but she was ‘saved’ by his wife.

The singer, 33, recalled the hilarious moment during her ITV special An Audience With Adele, which was filmed at the Palladium in London in front of a star-studded audience including Emma Thompson, Jodie Comer, David Tennant, Alan Carr and Jodie Comer.

The mother-of-one confessed she feared she would end up in prison, and left the audience and viewers gobsmacked as she shared details from the embarrassing incident which occurred when she first moved to Los Angeles.

During a Q&A section of the eagerly-awaited event, Hollywood actor Samuel L Jackson asked whether she had used her star power to avoid the consequences of her bad behaviour.

“My question is, have you ever used your Adele-ity to get out of a ticket?” he said, before adding: “[or a] precarious situation?”

“Well one time on the 401 [freeway] Samuel L Jackson, when I first moved to LA, which by the way was never meant to be for as long as I did,” Adele began.

“I’d never really driven there before, I was driving in the fast lane and I wasn’t going that fast as there was a lot of traffic. I was in a rental and the windows were tinted a bit too dark, but I didn’t know that.

Samuel L. Jackson asked the singer if she'd ever tried to get out of a tricky situation
(

“Anyway I was minding my own business and suddenly a police car pulls up behind me and you know he’s like, basically hinting that I need to pull over, so I just stopped where I was,” the Rolling in the Deep hitmaker continued.

She said she’d “never been pulled over in my life”, and didn’t know what to do, so just decided to pull over in the carpool lane.

“He comes on that tannoy on the top of the car screaming at me being like 'what the hell are you doing pull off, pull off’,” Adele laughed.

Adele said she had no idea what to do, so just stopped the car on a busy freeway
(

"So I followed him, I was just on my way to the supermarket actually, living my best life. He pulls me over and I wind all the windows down as I've been taught to do before. Especially if you're getting pulled over in America you never know what they're gonna do,” she added, referring to the ongoing controversy over police brutality in the US.

Adele then handed over her UK driver’s license, which had a picture of her from when she was 17, so she looked unrecognisable.

“I gave him my British driver's licence, which might as well have been like a blockbuster card, he'd never seen it before, also it looks nothing like me, it's me when I was like 17,” she said, as she desperately tried to prove her identity.

“I'm like 'I'm English I'm just here for a bit, blah blah blah' proving that it's real and then he goes back to the car and comes back and he's on the phone with his wife who's screaming at him on the phone for pulling me over,” Adele cackled.

After being berated by his wife, the police officer was apologetic to the Grammy and Oscar-winning singer, and didn’t take any further action against the outspoken star.

“He's like 'I'm so sorry Adele, do whatever you need to do,' so it was her who saved the day,” she laughed.

Previous : I’m A Celeb fans repulsed as Danny Miller swallows down mouthfuls of sick on helicopter
Next : Myanmar junta chief to be absent from China-ASEAN leader summit -sources