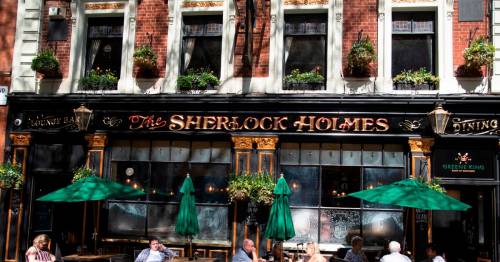 The Monopoly Pub Crawl: 26 London boozers to check out for board game-themed adventure

Monopoly usually ends in tears with the table overturned, someone being called a cheat or demanding the banker calls a rematch following three painstaking hours.

But one game we can almost all get on board with is the Monopoly pub crawl – a map of 26 boozers dotted around London, from Old Kent Road to Mayfair.

For every street or station, we’ve picked out a pub on – or closest to – the Monopoly property where you can kick back and enjoy a drink and learn a bit about the history of the Big Smoke.

From pubs that once marked the ‘start’ of London, to others frequented by famous and historic faces – there’s stories hidden in the corner of every tavern.

We recommend taking the pub crawl in the order below so that each pub is within walking distance, rather than going in order of the Monopoly board.

Remember to drink responsibly and be Drink Aware – you could even split the crawl over a few days during a city staycation. This historic Grade II listed pub at 386 Old Kent Road opens at 11am, and offers stunning timber interiors as well as a large outdoor terrace.

The Victorian pub was built in the early 19th century, and is on the CAMRA National Inventory of Historic Pub Interiors. 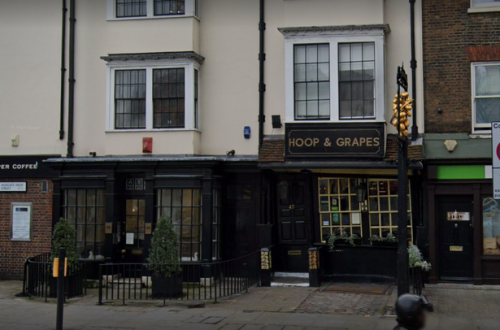 This is one of the most historic pubs in Farringdon, once the secret London location for ‘Fleet weddings’.

The pub is located opposite the Aldgate tube station and it is steeped in history.

Inside, there’s not a right angle in sight at the timber-framed boozer, which survived the Great Fire of 1666, the Blitz and its scheduled demolition in the 1990s. 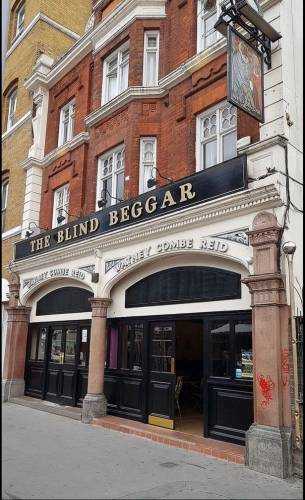 Open from midday, The Blind Beggar in the East End of London has certainly seen some action in its years.

The pub is the former Manns Albion Brewery where the first modern Brown Ale was brewed, built on the site of an inn established before 1654.

The pub gets its name from Henry de Montford, who was said to have lost his sight at the Battle of Evesham in 1265. He was said to beg at the crossroads and became ‘the blind beggar of Bednall Green’.

In 1904, the pub was at the centre of an attack which saw ‘Bulldog Wallace’ – a member of The Blind Beggar Gang of pickpockets – stab a man in the eye with an umbrella.

But the pub is probably most famous for the time Ronnie Kray shot a man in the face on March 8, 1966.

Just a three minute walk from Angel tube, this Edwardian fronted gastropub is a great choice for your Monopoly pub crawl.

Downstairs, the basement toilets see an indoor fountain, which makes for a rather peculiar pub feature. 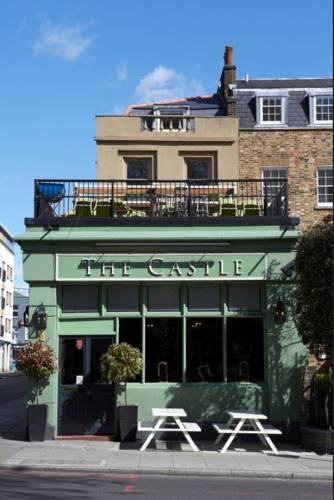 Dog friendly pub The Castle is hidden just around the corner from Upper Street, and is decked out with stunning vintage furniture.

It offers a sunny roof terrace and a great selection of burgers if you start to feel peckish.

It is believed that in this very building, the Hatton Garden diamond heist plan was hatched.

There are a number of pubs near to Kings Cross Station we could have picked, from O’Neills to The Betjeman Arms – but none are closer than The Parcel Yard, located inside the station.

The pub is set in a Grade I listed building – formerly the old parcel sorting office – and is often busy with people passing through.

Free WiFi and craft beers – what more could you ask for? And don’t forget to grab a photo at Platform 9 ¾ on the way out!

One minute from Euston Station, Euston Tap offers two pubs for the price of one. The Beer Tap and Cider Tap are opposite each other at the entrance.

The pubs offer 47 lines of draught beer and cider, 31 of which are kegs with an ever-rotating selection of ales, lagers, stouts and ‘yet unnamed styles’ – making it a great place to try something new.

The two-storey venues also have outdoor beer gardens perfect for if the British weather plays nice. 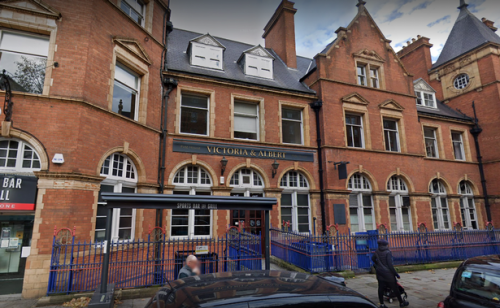 Tucked inside the station is two-bar pub Victoria and Albert. Think high ceilings, armchairs and old photos throughout.

Grab a drink and enjoy a quick game of pool, or sit back and watch one of the big screens.

The station side also has a few tables out on the concourse if you fancied something a little different. Over 400 years old, the Rose and Crown was once known as ‘Number One, London’ because it was where the countryside ended and the city began.

The boozer is believed to have been used by Oliver Cromwell and his entourage, with the cellars used as a jail for criminals awaiting execution.

On the corner of Shepherd Market you’ll find Ye Grapes, filled with unusual taxidermy and a general hunting theme.

The dark and atmospheric pub was licensed in 1742 as Market Coffee House and rebuilt in 1882. It retains some of its stunning Victorian features, including high ceilings, wood panelled walls and cosy drinking corners.

This one can get busy, but there is a roped-off area outside for drinkers. Overlooking the beautiful Green Park, Henry’s Cafe and Bar is a solid choice for the Piccadilly property pitstop.

Located at 80 Piccadilly, Mayfair, the pub underwent a renovation in 2016, which saw a selection of raised seating areas and velour banquettes installed amid the Art Deco glass and mirrors.

If you’ve worked up a hunger, there’s a selection of club sandwiches, flatbreads and pub grub. This is said to be the second oldest licence in the West End, rebuilt in 1861. The Red Lion is tucked away down Crown Passage, with a cosy wood panelled bar serving pub grub and traditional ales.

Watch your step on the way to the loos, though – the stairs are steep! 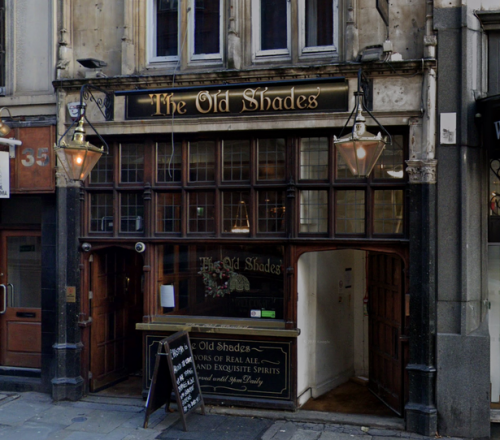 Grade II listed pub on Whitehall, The Old Shades, sits just off Trafalgar Square in the heart of Westminster.

The bar is full of character and serves a selection of six hand pumps and a varied menu of pub food.

The pub has been serving Londoners since it was originally built in 1898, with the word ‘shades’ originally a generic term for cellars. 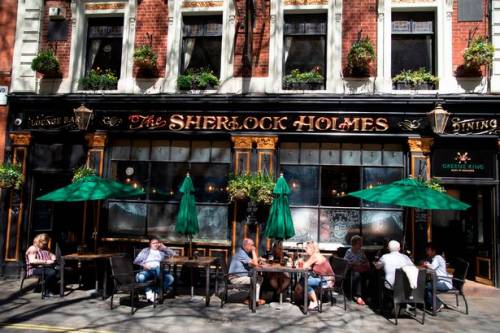 The Sherlock Holmes pub
(Image: In Pictures via Getty Images)

Busy and atmospheric, Sherlock Holmes is named such after its wide range of memorabilia related to the fictional detective.

Holmes and Watson frequented a Turkish baths that was located right next door at number 25. Writers from Samuel Johnson to Dickens have occupied spots at this pre-Victorian pub, often frequented by the journalists of Fleet Street throughout the years.

The venue dates back to 1667 having been destroyed in the Great Fire of London.

It was once home to Polly, an African Grey parrot who would entertain punters, with newspapers sharing the news of her death in 1926.

The Strand – The Wellington If you’ve made it to The Wellington, you’re nearly two thirds of the way through the pub crawl, with just nine of 26 left to go.

It’s a small pub, right next to the Lyceum Theatre, so it gets busy pre-show.

Named after Sir Arthur Wellesley, Duke of Wellington, the pub was founded in 1846.

The current building dates back to 1903, famous for its stunning neo-gothic interiors, from the impressive sculpted ceiling and stained glass windows, to the original marble fireplace.

Bow Street – The Marquess of Anglesey 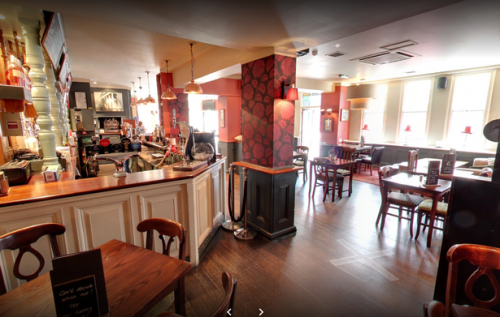 Famed for its fish and chips, the Marquess of Anglesey, on the edge of Covent Garden, is one of Soho’s most historic boozers.

The pub – in walking distance from the Royal Opera House – has been through the wars, literally.

It was built in 1663, licensed in 1752 as the Barley Mow, and became the Green Man until 1815. It was rebuilt in 1880, but was damaged by a bomb in the second World War, with the shrapnel marks still visible on the outside. The only traditional pub on the square, The Admiralty’s interior is inspired by HMS Victory, Nelson’s flagship at the Battle of Trafalgar.

The Italianate building was built in 1871 for the Union Bank, and became a listed building in 1987.

In 2005, it became a Scottish food and whiskey restaurant, but it was later acquired by a brewery and reopened as The Admiralty in October 2014.

Leicester Square – The Moon Under Water

The Moon Under Water is the second JD Wetherspoon pub on the list, so will make for a fairly cheap and cheerful round.

The pub is in the building of the old Deansfate Picture House, which opened in January 1914 and had 700 seats.

After it closed, the building was converted into the oub, retaining several original features from the cinema. 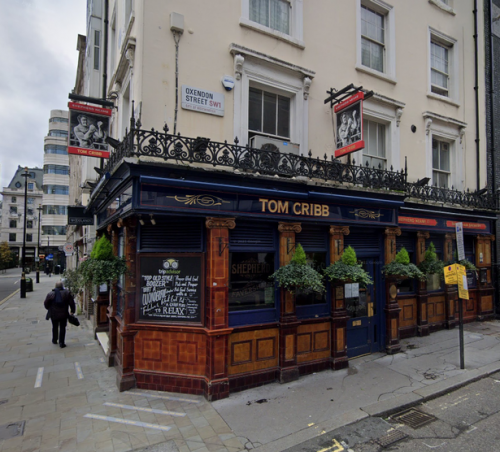 This yellow property on the Monopoly board isn’t actually home to any public houses – but the nearest one is well worth a visit if you’re into boxing.

Tom Cribb is named after the British bare-knuckle champ who fought between 1805 and 1811, who later went on to run this very boozer.

An English Heritage plaque pays tribute to the sportsman outside the pub, as well as one dedicated to Bill Richmond – a slave-turned-boxer who became the ‘world’s first black sports superstar’.

Regent Street – All Bar One Just on the corner of Regents Street and Margaret Street you can grab an espresso martini at All Bar One.

The modern chain has a trendy, lively atmosphere where you can plan your next move for the Monopoly pub crawl home stretch, with just four more venues to go. Vine Street – between Regent Street and Piccadilly – was named after a pub called The Vine, which was possibly linked to a vineyard that once occupied the site in medieval London.

These days the street itself doesn’t have any pubs, so head over to the Leicester Arms on Glasshouse Street.

Now run by Greene King, the Coach and Horses has stood at No. 1 Great Marlborough Street since the 18th century. There’s been a pub on this street corner since 1711, but the current building dates to 1897, as many buildings on the street were demolished and rebuilt.

It’s believed that poet Shelley frequented the boozer before eloping with Mary Wollstonecraft, who wrote Frankenstein. Bond Street is another property with a surprising lack of taverns, so head behind Bond tube station to Davies Street and locate The Running Horse.

Established in 1738, the hunting-themed pub is the oldest public house and kitchen in Mayfair. 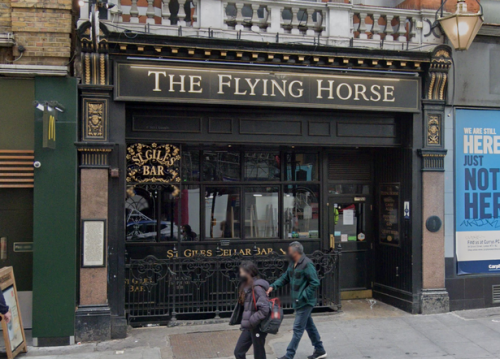 The last remaining pub on Oxford Street, The Flying Horse dates back to 1790. Back in the day, regulars would be theatre goers from the Tottenham Street Theatre music hall.

The pub – now a Grade II* listed building – features a painting of three ladies by Felix de Jong, who was the leading decorative artist in the music hall.

And there we have it, the final stop of the Monopoly pub crawl, so sit back and relax, or head home victorious. Just remember to drink responsibly and be Drink Aware.

Previous : Inside the UFO-themed pod you can spend the night for out of this world experience
Next : Police rally around to fund £25k life-saving treatment for ex-cop with rare condition