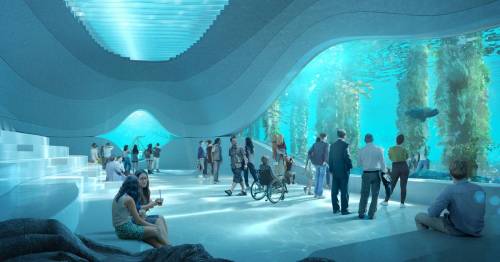 Incredible underwater observatory for whale-watching set to open in 2022

A seriously cool new whale-watching attraction is set to open in 2022, with an underwater observatory from which visitors can watch mammals from humpback to blue whales.

The £16.8million attraction will also feature an underwater restaurant, above-the-water viewing rooms and an art gallery and exhibition space.

Unfortunately for Brits, it's going to be quite the trek to visit – the new attraction will be opening in the town of Busselton, in Western Australia.

Still, it's definitely one for nature lovers to pop on the bucket list, and not just because the region is renowned for migrations of Southern Right, Humpback, Pygmy and Blue Whales between September and December. 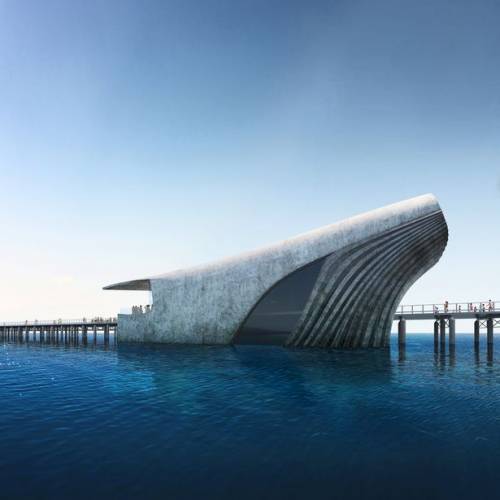 The building will be fittingly shaped to look like a whale (concept imagery)
(Image: Baca Architects)

The building itself has been designed by Baca Architects, who have offered a sneak peek at what visitors can expect by releasing concept images for the new attraction, dubbed the Australian Underwater Discovery Centre (AUDC).

Located at the end of the Busselton Jetty, the AUDC will be the largest natural marine observatory.

The Cetacean design will also feature a large glass window which will be partially above the water, so that when visitors glance out it will feel as though they are inside a whale peering out above the water.

Busselton Jetty Chairman, Barry House, said: "This is as authentic as it gets, because people are in the tank and the fish are looking in. By adding underwater dining, underwater sculptures, marine art and other features, this project will enhance Busselton Jetty’s 155-year-old experience." 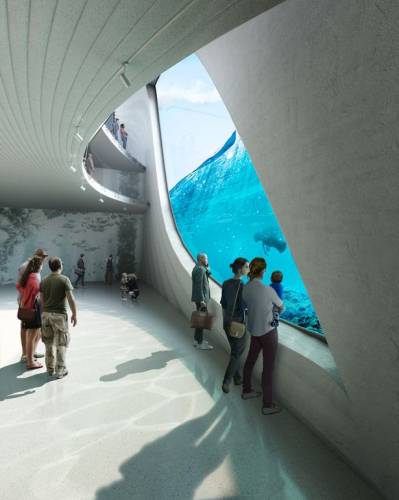 There will be a partially submerged window where visitors can see both above and under water (concept imagery)
(Image: Baca Architects)

The design of the building isn't just for aesthetics – the 'head of the Cetacean' is actually angled into the weather so that, similar to the bow of a ship, it can help dissipate the waves (which can reach heights of 6.5m in the region).

Baca Architects said they have chosen to make the building from concrete with cement for a durable structure that can withstand the weather, not to mention the cement replacements can help reduce the building's carbon footprint.

At the time of writing the building is still in planning stages and undergoing public consultations, but it's hoped that it could open its doors by December 2022.

Although ongoing travel restrictions mean that a holiday in Australia is off the cards for Brits at the moment, there's no harm in adding it to the bucket list for now!

In the meantime, Brits can find plenty of whale-watching opportunities a little closer to home. For a start Scotland is one of our top picks of the world's best whale-watching destinations, not to mention there are heaps of brilliant spots across the UK for seeing wildlife also including the likes of puffins, sharks and seals.