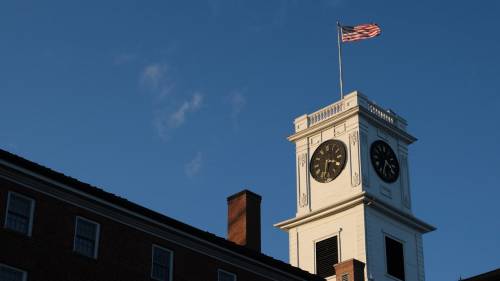 The Pointless End of Legacy Admissions

At élite colleges, there was a time when a brainy boy, one from a humble or upstart family, admitted thanks to his manifest talents, gained social status and career advantage by association with his high-born classmates—the ones whose dads and granddads had gone to the school, the legacies. Now, in a time of STEM dominance and crypto-finance, a legacy kid at an élite school gains social status and career advantage by association with the smart kids. Back in the old days, the rich kids probably liked having a few smart kids from the lower classes around, or at least conceded that they were necessary. The raw bookishness of the smart kids ratified the larger enterprise that they were all participating in—it was a college, after all. But now that the aristocrats are siphoning status from the meritocrats, the social bargain is starting to look like a bad one. What are the non-legacies getting out of it? The presence on campus of posh loafers with family connections must feel like an insult to them, given their steely commitment to the college-admissions quest.

This reversal in the status exchange of élite-college attendance helps explain why Amherst College chose to end the admissions preference for legacies, and why many other top schools will surely be following suit. Amherst’s decision sends a strong message to the college’s rivals, not least because it’s been greeted with near-universal praise beyond academia. Indeed, it’s hard for most people to find a downside to ending legacy admissions. But I’ll give it a try.

One philosophical reason to lament the end of legacy admissions is that it’s another symptom of the institutional convergence at work in American higher education. The consideration given to legacy families is a lineal gesture, and represents one of the final emblems of qualitative distinction among schools—the regional, religious, pedagogical, and historical differences that once gave America’s many colleges their many different personalities. As long as the numbers of legacy admits were decorously low, and as long as the stakes of admission to one college over another did not feature as an emergency in American society, an old college admitting a handful of underachieving legacies went with the equable assumption that an old college was a quirky thing. The number of people who gave a damn about who got into Amherst, or Swarthmore, or Bowdoin was small enough that those schools could get away with being themselves. But now those schools compete in a fully nationalized college market, under the hot light of the college-ranking industry and the obsessive gaze of the nation’s college aspirants.

All this suggests that Amherst’s decision on legacies, virtuous and equitable as it sounds, would not have been made if it wasn’t, as the consultants say, strategic. In the fierce prestige competition of American higher education, no college is hobbling itself on purpose. And the decision to axe legacy preferences, with its twin suggestions of social justice and academic rigor, gives Amherst an immediate public-relations victory over its rivals. A boost in application numbers and an enviable drop in its rate-of-admissions percentage seem inevitable.

In retracting this perk for rich alumni donors, Amherst seems to be making a financial sacrifice, but it probably isn’t. Ending its legacy policy might even help its bottom line in the long run. Research suggests that favoring legacies either increases donations marginally or has no effect. Besides, Amherst, a school with fewer than two thousand students, has an endowment of almost four billion dollars. For a school with two million dollars of endowment per student, taking a small hit in alumni donations in exchange for this singular boon of institutional marketing seems not just a feasible move but a clever one. As Amherst’s dean of admission and financial aid, Matthew L. McGann, concedes, the school can afford it.

The financial sense of this move becomes even clearer in light of a donor boycott targeting élite colleges that favor legacies in their admissions process. Spearheaded by EdMobilizer, a coalition that “advocates for first-generation, low-income students,” the boycott seems tailor-made to go viral: it circulates a public moral challenge among high-status peers who, to meet this challenge, need only keep their money instead of giving it away. Colleges would be smart to worry. And the prospect of news stories in which a college appears to defend the pampered scions of wealthy old alumni against the scrupulous and brilliant first-gen and low-income kids who recently graduated must be causing nightmares among deans of publicity.

Yet whenever a major reform is announced from within the admissions world, it’s a good idea to ask yourself what new powers the admissions department has given itself. Just as high-profile moves by colleges such as Amherst typically boost their competitive standing, the “reforms” pursued by the admissions departments of those schools reliably increase the influence of those departments, which I’ve written about in several outlets, including this one. In this case, putting an end to legacy preferences will also remove a small but obvious limit to the selection prerogatives of admissions personnel. According to the Times, citing McGann, the Amherst admissions department applies its legacy preference only after it has narrowed down its pool to applicants who are “qualified.” This contradicts the stereotype of the dim legacy, but it accords with recent data that suggest that, on hard measures such as G.P.A. and SAT scores, those admitted as legacies already fit within the larger pool of qualified applicants. This means that, for most legacies, the benefit they receive works within the softer, holistic section of the college application. Having an alumni parent is less like magically winning several hundred SAT points and more like writing an essay that the assistant dean really admired. Accordingly, the legacies will be replaced not by a clearly smarter bunch of applicants but by ones who were better at getting the admissions readers to like them. This prerogative—the enforcement power over not just academic standards but character traits and moral beliefs—is very important to the admissions departments of selective schools. Removing the legacy preference will expand it.

Of course, the legacy preference is still unfair, even understood in these terms. It still has a whiff of corruption about it. But, as such, it represents the corruption of an absurd process. Admissions departments have faced an intensifying selection problem over the last thirty years. As competitive behavior among college applicants grew more intense and self-aware, starting in the early nineties, it quickly became a feedback loop, with high-achieving teen-agers striving to outdo each other on both academic and extracurricular measures. To hedge their bets in this stiff competition, these teen-agers, who were better informed than past generations about both college rankings and the preferences of their fellow-applicants, applied to more schools and became more purely brand-conscious in their ambitions: they widened their focus to the whole nation and increasingly trained their sights on the best school that they could get into.

Desirable schools were swamped with eager and qualified applicants from around the country; it was both an obvious bonanza and a headache. These institutions suddenly had too many fully qualified applicants who, on paper, looked too much alike. Colleges have sought to solve this problem by inventing an evolving set of moral tests and character preferences for applicants to satisfy. But it’s easy to game these criteria with gilded résumés and ingratiating, professionally coached essays—a problem that the admissions bureaucracy has addressed by declaring a new and deeper interest in “authentic” applicants. This move, though, merely gives applicants and their essay coaches a new moral trait to perform: authenticity. This—admissions bureaucrats bidding applicants to perform authenticity for them—is why Amherst’s announcement should trigger a cynical laugh. In celebrating the end of this specific corruption, we help legitimatize the larger absurdity.

Ending legacy preferences really will (purportedly) remove this one bit of unfairness, and, for that, it deserves a cheer or two, but I’m inclined to begrudge it anyway. It will only strengthen the moral presumptions behind the invasive methods of holistic admissions. And it will continue the larger charade in which élite colleges use various forms of egalitarian P.R. to launder the monumental increases in wealth and cultural power that they have accrued as a result of America’s transformation into a more precarious, unequal, and atomized society built upon a white-collar “knowledge economy.” The decisive stage of this long transformation came in the early nineties, when politicians and economists declared that the smart response to disappearing jobs was for everyone to go to college. Today, thirty years later, you can watch selfie videos of anxious college applicants awaiting their admissions decisions, then collapsing into tears at the rejections or exulting in the acceptances, and feel the awesome power that these changes have bestowed upon élite colleges via their admissions procedures.

In its growing complexity and elaboration, the admissions process appears to impressionable teen-agers as a rational and exhaustive investigation into their objective merits. But in the spiritualized meaning and methods that the colleges attach to it, and in the powerful hints of arbitrariness that attend such obscure distinctions among basically identical applicants, and in the belief that the admissions envelope or e-mail contains a message from the Fates themselves, the drama of selective admissions takes on aspects of pagan religion. After all their academic grinding and strategic self-presentation, those kids are waiting for a coin flipped by a god to stop spinning on the floor. You can see how their response in such a fateful moment, when the choice goes their way, might be swooning gratitude for the two things together—the deserved flattery by the rational procedure and the private gift from the fickle gods, who could so easily have picked a different kid. And you can see how, for kids so flattered and fate-kissed, this gratitude might later take the form of generosity—alumni donations for the élite colleges that chose them.

Ironically, then, the economic forces that have driven inequality and enriched college endowments could make the legacy children of generous alumni obsolete, from a fund-raising perspective. But Amherst, and other colleges that stop giving an admissions bonus to legacies, might end up missing them anyway. In the troubled moral ecology of élite higher education, legacies have long served as scapegoats—in the traditional sense of that term. On their heads are laid the great socioeconomic sins that a rich American college can neither avow nor do without. If you think of all the ways that élite colleges are entwined in the harshness of the American economy, legacy admissions are hilariously marginal. But worrying over unfairness in the admissions process, fretting about how family money and inherited privilege figure on campus, and treating legacies as the glaring emblem of these things allow élite schools to transfer the unease and suspicion that come with their stunning wealth and exalted status onto an occasional practice and a specific class of people that everyone disapproves of already. Without legacies to make a show of fretting about, colleges will need to come up with someone else to kick around besides Thatcher Baxter Hatcher III.