The New Right, the Benedict Option, and a Second Look at Waco 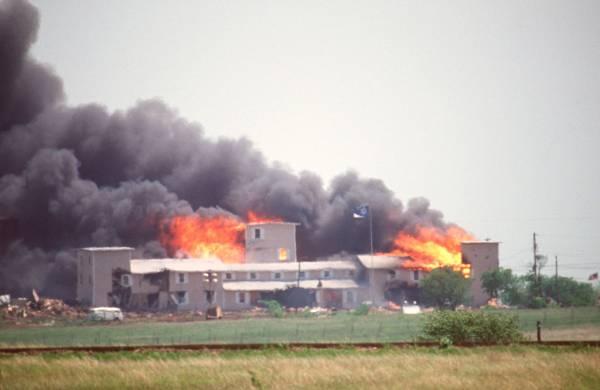 The strangest cultural phenomenon of the Trump era is how the biggest Clinton-era law enforcement controversies are getting a second look, with filmmakers being curiously open to a point of view confined mostly to the anti-government right at the time. First there was the “Manhunt: Unabomber” miniseries, an almost indecently sympathetic portrayal of Ted Kaczynski which surely played a role in the second life the Unabomber seems to be enjoying online, followed by Clint Eastwood’s beautiful take on the persecution of Richard Jewell. PBS also revisited the Oklahoma City bombing in 2017, in more of a paint-by-numbers treatment, which didn’t go into, for example, any of the issues with his trial that Gore Vidal addressed in Vanity Fair.

But the latest example, the Paramount miniseries “Waco,” which premiered in 2018 but was recently added to Netflix, where it has really taken off, is probably the most interesting, both for its content and the awkwardness of a critical portrayal of the Clinton administration’s worst law enforcement disaster being produced by Clinton pal Harvey Weinstein, though his name has been removed from the credits. I suppose he won’t have to explain that one to them in person, now that he’s in prison.

Perhaps it’s Trump that has led wide swaths of the liberal-leaning public to second-guess their faith in government. It’s certainly a more interesting #Resistance trend to watch than the typical Rebel-Alliance-of-Dumbledore’s-Army-in-Gilead kind of stuff. In any case, David Koresh portrayed by someone like Taylor Kitsch, best known for his role playing another Texan, Tim Riggins, is something I never expected to see in my lifetime.

It’s not that people were unwilling to admit back then that the government made serious mistakes at the Mount Carmel compound over those fateful 51 days in 1993. Some liberals did and have since, including Ramsay Clark, who ended up representing some of the Branch Davidians in court. But the Waco siege became a catalyst for the vaunted militia boom of the 1990s, and a cause célèbre to people who are called “anti-government extremists” or whatever the term of art for watchdogs like the SPLC is. Waco became something the black-helicopter people talked about, therefore if you made too much of it, you might be on the path of radicalization yourself.

The Waco siege is an interesting case to consider in the context of today’s big debates on the political right, though I wonder if some of its current interlocutors may consider it a little gauche to do so. To vastly oversimplify, when it comes to the issue of government power, one can imagine an axis with Adrian Vermeule at one end. He’s comfortable using it, and thinks conservatives should be also. At the other pole we would place TAC’s own Rod Dreher and the Benedict Option, which is a strategy of localism based on a sense that the bigger cultural battles have been lost.

For the latter, one interesting detail to note about Waco is that, though the legal justification for the siege was to serve a firearms warrant, allegations of child abuse impacted several of the FBI’s decisions, as well as the attorney general’s decision to permit the use of tear gas. This is crazy on its face: if anything the presence of children should make law enforcement more reluctant to use gas. But child abuse, especially child abuse by religious extremists, is probably the strongest pretext a government can have for acting in a heavy-handed way.

Most of the issues that motivate the Benedict Option are related to children, and the media already considers social conservatives religious extremists. Harvard professors have begun to move toward the view that homeschooling in religious homes is presumptively abusive, or at least deprives them of rights. One does not have to be a conspiracy theorist to be worried about what all this could add up to. I would not want to imply that advocates of the Benedict Option have the sort of insane theological views that Branch Davidians do, they certainly do not, but the photographs of Mount Carmel burning are a vivid illustration of what the government can do to a small group of religious people who have resolved to separate themselves from the world in defiance of the liberal order. The FBI saved 25 children from abuse by gassing them and bringing their home down on their heads with tanks.

For the fans of government power on the new right there are also a few important implications from the Waco tragedy. The fairly new arguments from people like Vermeule or Patrick Deneen about how our ostensibly value-neutral liberal order does in fact have values, rules, rites, and the rest of it, is a concept anti-government patriot types have well understood for decades. There is certainly a pattern common to the Obama administration’s war on nuns or the crusade against Catholic adoption, and a grinning, lecherous sax-player telling the country the Branch Davidians had it coming, in that they all demonstrate the liberal limits of pluralism.

And yet Vermeule, based on his previous writing with Cass Sunstein, is not a fan of the way these people think, and not just because they are less well-disposed to government power than he is. Much has been made of Sunstein and Vermeule’s writing about conspiracy theories and “cognitive infiltration,” maybe too much, and I won’t belabor it. But the idea that the liberal order’s humanitarian idealism also has a dark side of jackboots and SWAT teams shares some attributes with conspiracy theories, and it was certainly treated as a sign of a conspiratorial mindset in 1995. Which is, of course, not to say it’s wrong.

Arthur Bloom is managing editor of The American Conservative. He was previously deputy editor of the Daily Caller and a columnist for the Catholic Herald. He holds masters degrees in urban planning and American studies from the University of Kansas. His work has appeared in The Washington Post, The Washington Times, The Spectator (UK), The Guardian, Quillette, The American Spectator, Modern Age, and Tiny Mix Tapes.

Previous : When Priests Aren’t Allowed to Give Last Rites
Next : Insect or Bat, Germ Warfare is a Dark Cold War Legacy