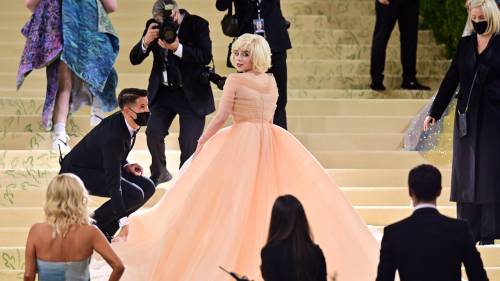 The Met Gala Searches for America

The oldest piece on display in the Metropolitan Museum of Art Costume Institute’s new show, “In America: A Lexicon of Fashion,” is not an item of clothing but a nineteenth-century quilt borrowed from the museum’s American Wing collection. It was made by a wealthy nineteenth-century woman named Adeline Harris Sears, whose father was a successful textile mill owner in Rhode Island. Beginning in 1856, when she was seventeen, she sent scraps of silk to notable politicians, writers, abolitionists, artists, and clergymen, asking that they sign their names to the fabric and send them back so that she could sew them into one gigantic tapestry. “Autographomania,” or fishing for signatures through the postal service, was a hip pastime for privileged teens at the time, but Sears’s undertaking was remarkably ambitious. In the course of the following two decades, she gathered scraps from the likes of Charles Dickens, Ralph Waldo Emerson, Washington Irving, Alexander von Humboldt, Julia Ward Howe, Harriet Beecher Stowe, Henry Wadsworth Longfellow, and seven Presidents, including “Yr. Friend & Servant Abraham Lincoln.” The editor Sarah Josepha Hale, who ran “Godey’s Lady’s Book,” the era’s leading women’s publication, rhapsodized about Sears’s quilt in one of her editor’s letters. “Who knows but in future ages, her work may be looked at like the Bayeux Tapestry,” Hale wrote. “Not only as a marvel of woman’s ingenious and intellectual industry; but as affording an idea of the civilization of our times.”

The quilt is included in the Met show—the first of a two-part, year-long exploration of American design—ostensibly as a nod to the heterogeneity of American fashion. Andrew Bolton, the curator of the Institute, began his remarks at the show’s preview on Monday by quoting Jesse Jackson’s assertion, at the 1984 Democratic National Convention, that America is not like a cohesive blanket but more like “a quilt—many patches, many pieces, many colors, many sizes, all woven and held together by a common thread.” Of course, an even more obvious thread connects Sears’s blanket to the Met Gala, the party held each year to inaugurate the Costume Institute show: a shared obsession with celebrity. The Gala, which usually happens in May but was delayed by the pandemic for more than a year, is, like Sears’s quilt, both a zazzy vanity project and an industrious feat of star-wrangling, featuring plenty of cuts of silk. 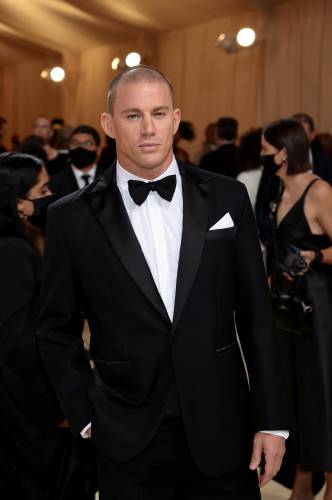 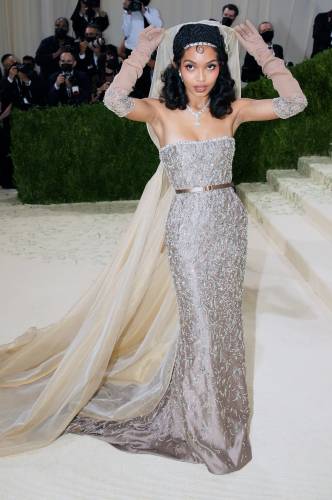 The sartorial theme this year was “American independence,” but it became clear early on in the evening that most attendees treated that brief as a carte blanche. The familiar European labels dominated—Gucci, Versace, Dior, Vuitton, Prada, Valentino. Channing Tatum wore a simple Versace tux that, as he told the actress Keke Palmer (one of the hosts of Vogue’s event livestream), vaguely reminded him of a photograph of John F. Kennedy, Jr. The actress Yara Shahidi wore a strapless beige Dior number as a tribute to the Jazz Age entertainer Josephine Baker, an American who decamped to Paris to reinvent herself. Rihanna arrived fashionably late wearing a custom, billowing black gown from Balenciaga that had whiffs of Rei Kawakubo and the Folies Bergère. Her boyfriend, A$AP Rocky, however, was cocooned in a California-based brand’s voluminous quilted coat, the closest nod to American folk-art traditions that we saw all night. 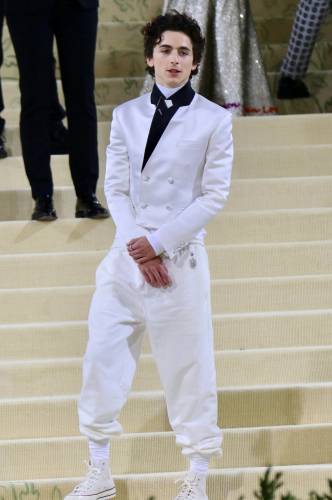 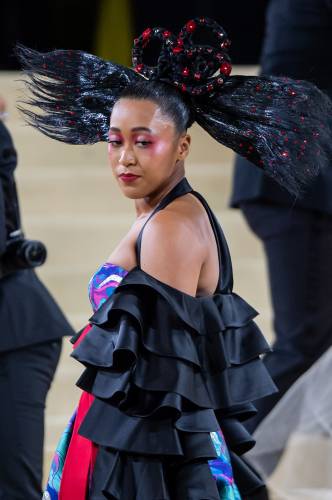 There were fewer archival, iconic American pieces than I’d expected—where was the Halston? Nineteen-eighties-era Donna Karan? Vintage Marc Jacobs? Stephen Burrows?—but some guests understood that the assignment was an opportunity to showcase American designers. Jennifer Lopez veered into the yeehaw side of Americana in a saddle-brown Ralph Lauren gown topped with fur pelts and a weathered cowboy hat. The playwright and screenwriter Jeremy O. Harris wore a cyber-yellow Tommy Hilfiger ensemble inspired by the style of the late singer Aaliyah. The getup of the pop singer Kim Petras—another nod to the West, by the New York label Collina Strada, adorned with a garish rubber horse head—would not have been out of place at the Met’s previous, camp-themed gala. 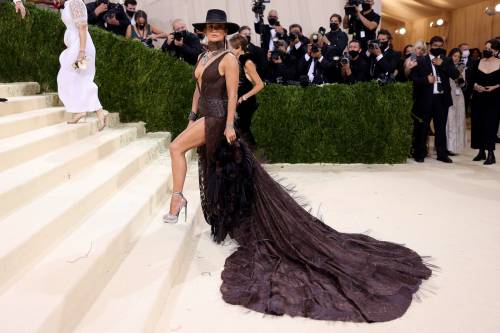 If there was anything consistently “American” about the occasion, it was the gala’s breathless emphasis on youth. The four chairpeople of this year’s event—the tennis star Naomi Osaka, the singer Billie Eilish, the actor Timothée Chalamet, and the poet Amanda Gorman—spanned in age from their late teens to mid-twenties. Osaka, who is a brand ambassador for Louis Vuitton (what’s more American than corporate sponsorships?), wore a Vuitton piece co-designed by her sister Mari Osaka as an homage to their mixed Japanese and Haitian heritage, complete with a cherry-red obi belt. Eilish went classic Hollywood blonde in Oscar de la Renta. Chalamet, often an impish fashion figure, wore a slouchy Haider Ackermann suit, a silhouette we’ve seen him in before, while Gorman chose a frothy blue Vera Wang gown that placed her somewhere between Statue of Liberty and professional figure skater. Internet influencers such as Emma Chamberlain and Addison Rae stomped the red carpet, their presence—surely anathema to some high-fashion snobs—a calculated nod to social media’s role in birthing and disseminating trends. 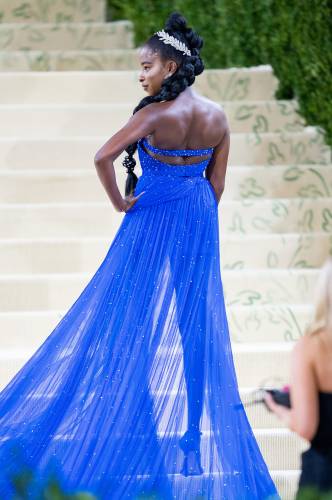 One hardly expects an opulent charity ball to be a revolutionary event, but it was surprising, given our current national maelstrom, how few people chose to interpret the American theme as a prompt for political statements. Alexandria Ocasio-Cortez, an exception, wore a custom white gown from the Brooklyn-based Black designer and activist Aurora James of Brother Vellies with the words “Tax the Rich” splashed across the back in red. But nothing on the red carpet felt as galvanizing as what I encountered at the press preview of the Costume Institute show, earlier in the day. The exhibition features a hundred pieces from American designers, many of them well-established brands—Ralph Lauren, Calvin Klein, Diane von Furstenberg, Michael Kors. Each outfit in the show is accompanied by a headpiece that features a corresponding term, such as esprit, vitality, and self-determination. (What could be more American than parroting the language of self-help?) The show offered real delights, though, in its commitment to designers who are still very early in their careers—some of whom barely had any warning that their pieces were making it to the Met. 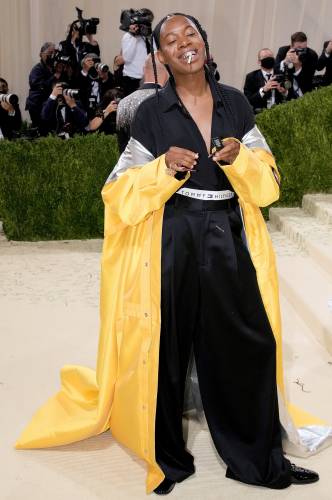 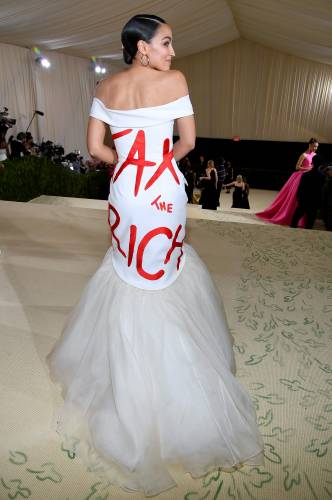 Aaron Potts, of the label A. Potts, said he only guessed that a wooly yellow blanket coat from his Fall 2021 collection would be in the show because the museum requested the garment and didn’t send it back. “I’m a young designer who is Black, and it’s about damn time, actually,” he said of his inclusion. Not far from Sears’s quilt, the young L.A.-based designer Claude Kameni was live-streaming next to her piece in the show, a stunning gown in an African wax print that reflected her roots in Cameroon. “I cannot deeeeeal!” she told her phone camera, flapping her hands in excitement. In another hall, the designer Susan Cianciolo, whose simple 1999 black dress is in the show, was kvelling because two of her former Pratt students—Sophie Andes Gascon and Claire McKinney, who together have a brand called SC103—had made it into the show with an avant-garde woven piece.

This emphasis on new talent gave the entire Costume Institute show an uncharacteristically relaxed, gregarious quality. Becca McCharen-Tran, who makes provocative swimwear and bodysuits for her line, Chromat, was wearing combat boots and smears of green eyeshadow that matched her neon ponytail. She told me that the curators had requested a size fourteen of her stretchy black lycra swimsuit, which comes with anti-chafing leg bands. “It’s for people whose thighs touch,” she said. Then she reached into the glass exhibit case to pull down the swimsuit’s zipper a bit. “Hey, no alarm went off, so I guess I’m allowed to do that,” she said. Call it a small act of American independence.

Previous : U.S. panel votes to approve $1 billion for FTC privacy probes
Next : The New Yorker Festival Returns in October, in Person and Online