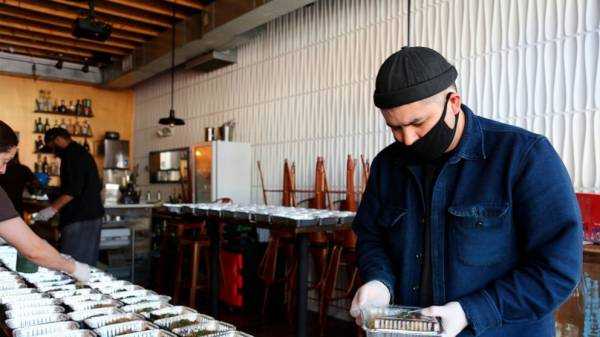 NEW YORK —
Chefs need to be good at math to keep their menus balanced. But Chef Erik Bruner-Yang is applying his math skills to help something larger — the decimated restaurant industry.

The Washington, D.C-based Bruner-Yang has established The Power of 10, a non-profit initiative that seeks donations to re-employ laid-off independent restaurant workers, keep the eateries open and provide their meals to neighborhood workers on the front line of the pandemic.

The initiative aims to raise $10,000 in donations per week to support 10 full-time jobs at a local restaurant. Those workers — earning an hourly wage of $14.50 — then provide 1,000 meals to hospital workers, homeless shelters and others in need. Donations start as little as $10 for one meal.

“You’re buying a meal for us to cook for someone else, and all the restaurants share in the pot,” Bruner-Yang said. “The math works everywhere. The Power of 10 is just an easy way for people to understand how their donation works.”

The program got a huge shot in the arm Wednesday when Capital One announced it would sink hundreds of thousands of dollars into the effort. Thanks to the donation, The Power of 10 will now have over $750,000 in funding, giving it an ability to serve over 70,000 meals in the next four weeks.

Some of the latest restaurants to sign on include Mi Tocaya Antojeria in Chicago, Guelaguetza in Los Angeles, and the two New York hot spots Field Trip and La Newyorkina.

“The math kind of happened on its own, really. I was trying to figure out what I needed to do to save my own business. How many meals did I need to serve per week? How many people would that allow me to keep employed? And how much money I would need to generate to do that.”

He worries that restaurants around the country are imperiled, and a community of vendors and chefs may collapse. “I have a platform. I have resources. I have access. I have to make sure I keep my neighborhood intact,” he said.

Bruner-Yang says his organization works in coordination with Jose Andres’s World Central Kitchen as well as working with other groups with logistics.

“I think everybody is playing a role. No one should feel bad doing one thing or the other. I think everyone needs to make the choice that’s best for them. For me, all I know is hospitality and working.”