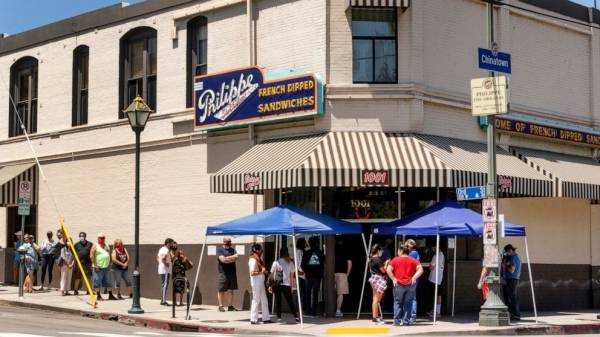 LOS ANGELES —
California restaurants have drafted a plan to allow the industry to reopen for sit-down dining with an array of safeguards while avoiding possible requirements imposed in other states that customers have their temperature taken or the number of tables be dramatically limited.

The recommendations, obtained by The Associated Press, are to be submitted to Gov. Gavin Newsom on Thursday. They envision a changed world within dining rooms, as an industry built on face-to-face contact and crowded tables looks for ways to safely conduct business and avoid the spread of coronavirus.

Only family members or people who live together would sit at the same table. Buffets, salad bars and shared bread baskets would be out. Salt and pepper shakers could be replaced by bottles of hand sanitizer. And meals could arrive from food servers sheathed in face masks.

Restaurant dining rooms were shuttered in California in March as part of broad orders to deter spread of the virus, though takeout and delivery remained. The move devastated the industry and sent droves into unemployment lines in a state with an internationally known food culture.

Cities and counties would be left to determine the rules within each category, because what makes sense in San Diego might not in Eureka or Bakersfield.

For example, the recommendations urge local governments to consider such measures as requiring temperature checks for restaurant employees, requiring mandatory hand-washing schedules for workers and face coverings for employees who interact with the public.

In the area of social distancing, local jurisdictions will need to establish specific measures for keeping tables apart or setting up barriers between them, and limiting tables to family and household members but not to exceed 10 people. Restaurants could consider a phone or text-based reservation system that would not allow a customer to enter until the table is ready.

In Florida this week, restaurants in all but three South Florida counties were allowed to reopen their inside dining rooms at 25% capacity. The California restaurants are seeking to avoid an across-the-board percentage limit on how many people could be inside, instead allowing local officials to account for differences in restaurant designs and layouts.

“The risk is different in every county,” association CEO Jot Condie said. “The layout plans are all unique and different.”

Still unclear is when Newsom might allow restaurants to open their doors, though he has hinted in some areas that changes could be coming soon. In Los Angeles, San Francisco and other congested urban areas, businesses are likely to remain shuttered longer.

For restaurants, the return to business would mean a dramatic shift from what customers have taken for granted.

“It’s not a mass reopening,” Condie said. With all the coming changes and virus-related requirements “they are all startups.”

Condie predicted that diners would not only accept the changes but “I think they are going to come to expect it.”

In some reopened eateries around the country, restaurants are checking customers’ temperatures, a possible indicator of infection. The California restaurants are recommending local governments consider requiring temperature checks — but only for employees.

Nothing would prevent a county from requiring customer temperature checks, but Condie said “policing guests” was ultimately left off the recommendations. Part of the concern for restaurants centered on liability: customers who believe they were wrongly turned away could file a lawsuit.

The recommendations could result in changes that run from common sense to socially awkward.

In a tightly spaced restaurant, diners could end up looking at each other through plastic walls separating tables. Cleaning crews could be on routine patrols, swiping doorknobs and counter tops with sanitizer.

Owners might wince at the changes, and the added costs could be substantial, but they “understand the importance of this,” Condie said.