Post-Lockdown: Insist on the Old Normal 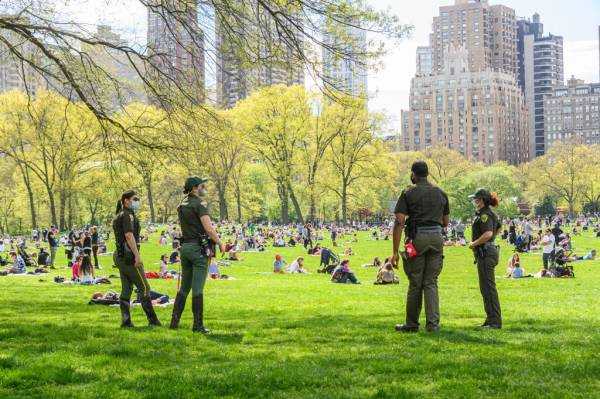 When the CIA wanted to circumvent possible Chinese bugging of its offices in Beijing in the 1980s, it came up with a voice protector or “hush phone,” essentially two masks with tubes running between them. It worked, but no one would use it. George Shultz said he felt “ludicrous” wearing something that made him look “like Siamese-twin elephants joined at the trunk.” Even during planning for Reagan’s state visit in 1984 when secrecy was essential, staff in Beijing simply refused to use a device that made them sound like Donald Duck.

And good for them. There were logistical reasons to reject the hush phone, like the impossibility of more than two people talking to each other at a time, but there is also something creditable about whatever part of Secretary Shultz said: I am a grown man, and I have some dignity.

Everyone is wondering what life will look like at the end of the month. Lockdown bitter-enders insist that the return to normal will not be like flipping a light switch, to borrow Maryland governor Larry Hogan’s expression. Instead, they say, we will need to spend an indefinite period in a twilight zone of half-freedom where lockdown orders have been lifted but aggressive safety measures remain — a “new normal.”

Based on descriptions of the new normal, I am not sure we should allow ourselves to get used to it. As eager as we are to get the lockdowns over with, we must not let desperation compel us to put up with things we shouldn’t.

Ross Douthat thinks that long lines outside grocery stores of people waiting to come inside and shop “may become a permanent feature of the semi-normal landscape.” That’s absurd, and, like the hush phone, there are both good reasons and gut reasons why.

One-way aisles and occupancy caps don’t do much to stop the spread of disease considering how little transmission takes place between shoppers who pass like ships in the night. Also, queuing down the block for groceries is just too grimly Soviet.

Social distancing measures should remain in place even after schools and businesses reopen, many say. But enforced by whom? Continuing to make cops responsible for enforcing a six-feet-apart rule will only lead to more viral videos like this week’s from New York, which depicts the violent conclusion of what started as a social distancing stop.

The New York City Police Benevolent Association says officers shouldn’t be enforcing “vague guidelines and mixed messages.” It wants the mayor to “get cops out of the social distancing enforcement business altogether.” The PBA is right. The alternative is for Americans to get accustomed to being hustled along by police for the crime of picnicking on the grass or reading a book on a park bench, which would be an ominous thing to start shrugging off.

Australia is making its new normal conditional upon citizens downloading a location-tracking app modeled on Singapore’s. The prime minister insists the app is voluntary, but business groups like Restaurant and Catering Australia are already considering requiring diners and shoppers to download the app before being served.

The government says its goal is for 40 percent of the population to download the app, a target still more than halfway off after its first week in the app store. “Downloading the COVIDSafe app is the major obstacle now between us freeing up a lot of these restrictions in a cautious way,” Prime Minister Scott Morrison said, not disguising the ultimatum.

The last time the Australian government requested emergency permission to track its citizens’ phones was the metadata retention law of 2015. As with COVIDSafe, repeated assurances were made about privacy and civil liberties. Later it was revealed that users’ metadata had been used by local city councils in order to track down litterbugs and other mundane offenders who had nothing to do with the law’s original justification, counter-terrorism.

The United States is not Singapore, and there are certain restrictions on our liberty that we won’t tolerate. A government location-tracking app should be one of them. Such excessive post-lockout safety measures are not needed to deal with a disease that is no longer in danger of overloading our hospital capacity. More importantly, Americans’ gut aversion to being overpoliced is worth preserving. Ordinary aspects of pre-coronavirus life should not be sacrificed in order to give those still attached to the lockdowns a psychological on-ramp or a face-saving pretense that their doomsday forecasts were more accurate than they were.

Except for open plan offices. Ban those permanently, for the good of the nation’s health.

Helen Andrews is a senior editor at The American Conservative, and the author of a forthcoming book about the Baby Boomers to be published by Sentinel this fall. She has worked at the Washington Examiner and National Review, and as a think tank researcher at the Centre for Independent Studies in Sydney, Australia. She holds a Bachelor of Arts in Religious Studies from Yale University. Her work has appeared in The New York Times, The Wall Street Journal, First Things, The Claremont Review of Books, Hedgehog Review, and many others. You can follow her on Twitter at @herandrews.

Previous : As Hungary Emerges From Quarantine
Next : US Justice Ginsburg Released From Hospital After Brief Stay