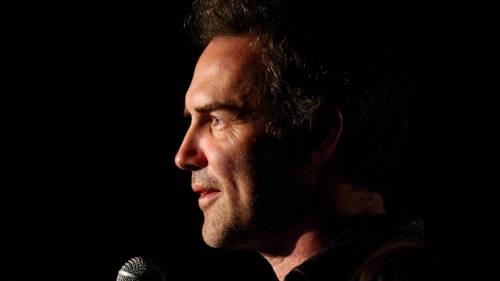 Norm Macdonald Was the Real Thing

News of the death of the comedian Norm Macdonald, on Tuesday, at sixty-one, from cancer, came as a blow to me. I met Macdonald only once, in 2018, when I spent a day with him for a Talk of the Town story—but it was a long day, and I remember wishing that I could offer him the column inches to match. Macdonald was gearing up to release a series on Netflix, a kind of inside-out talk show unimprovably called “Norm Macdonald Has a Show,” in which all the normal audience-pleasing constraints of production had been pointedly erased. He happened to be doing some standup performances in San Jose, California, and I happened to be in San Francisco, so I came down with my notebook on the morning train. The plan was for us to meet at his hotel and go to the Winchester Mystery House, one of the local tourist attractions—possibly the only local tourist attraction—and, I hoped, a useful backdrop if our interview turned out to be a dud. It wasn’t. Macdonald met me in the hotel lobby wearing sweatpants, sneakers, and a saggy orange polo shirt. He had just woken up. His twentysomething assistant, John Steere, led him to a meat sandwich and a bowl of dip, and he scarfed that down as I fretfully watched the clock. By the time we’d piled into an S.U.V. and arrived at the Mystery House, we’d missed our slot, so we shrugged and turned around. That was when I realized that, as far as the day went, I was less a reporter cornering an interview than a writer on the Norm train, along for the ride.

Like many people my age, I knew Macdonald chiefly as the host of “Weekend Update,” on “Saturday Night Live,” in the late nineties. (One of the current hosts, Colin Jost, has described Macdonald as his leading model in the role.) Also like many people my age, I’d sort of lost track of him in the decade or two since then, a period during which he brought out three seasons of his own sitcom (“The Norm Show”), a popular interview podcast (“Norm Macdonald Live”), and a comic novel written as a faux memoir (“Based on a True Story”). He fell back into my awareness with a Netflix special, in 2017, called “Hitler’s Dog,” which struck me as a masterwork of the form.

Semi-dissipated middle age suited his style. Macdonald was a Canadian who had cut his teeth as a writer on “Roseanne,” and his jokes tended to take their frames from a hard, dry TV Guide-and-flannel shtick. (“You know how they say guys have ‘gaydar’—they can see other gay people? I’m like that with guys at my same level of smartness,” goes one of his setups in “Hitler’s Dog.”) Yet he was a performer as much as a writer, and his mature style turned on a rich vocabulary of pauses, ironized niceties, and smirks set against his zonked-seeming deadpan. No one was better at stringing out a joke between its setup and its punch line. The purest instance of the skill might be his famous “moth” routine, in which he took a lame stock joke (“A moth goes into a podiatrist’s office . . .”) and, by delivery alone, built a three-minute meta-gag on top of it, working his audience all the way.

We weren’t far into our interview when I realized I had made the rookie mistake of taking Macdonald’s deadbeat persona as his real world view. It was and wasn’t. Early on, he charmed me by noting, in an offhand way, that he’d needed glasses all his life but, after losing his first childhood pairs, stopped bothering. (“I guess if I put on glasses now everything would be high-def,” he said—the description of normal human vision as a decadent TV feature being the Macdonaldian turn.) But I was caught off guard by how sensitive he was to creative work generally: he was a serious and studious reader, especially of the Russians, keen to get into the weeds with me about Tolstoy. And he gave off lambent joy about his art. My favorite moment of our day was back in his hotel suite, after the failed expedition, when he spontaneously delivered a kind of craft lesson to his assistant, Steere, an aspiring comic who was working on a bit about dogs. It was a long, winding exchange, but certain turns stuck with me.

“Right now it’s crowd work—ask about other dog owners,” Steere patiently explained to us, scrolling through notes on his laptop. “And then I go into ‘Anyone have big dogs? I have a hundred-and-fifty-pound dog named Chewy. Chewy is a five-year-old Great Dane that my girlfriend and I rescued as a tiny puppy.’ ”

“Rescued,” Macdonald murmured to me. “I didn’t know what that meant. I used to think they, like, ran into traffic—”

“ ‘So sweet. Love him so much. Even slept with us,’ ” Steere read. “ ‘We had no idea how big he was going to get. Eventually there was not enough space for the three of us—’ ”

“All right, let me just suggest this,” Macdonald said. “Don’t be afraid of saying things simply.” He tallied the components on his fingers. “ ‘Do you like big dogs?’ ” Pause. “ ‘I have a big dog.’ ” Pause. “ ‘He’s a Great Dane! His name is Chewy. He’s a hundred and fifty pounds.’ That’s the end—that’s the big information.”

“To me, ‘chick magnet’ sounds a bit douchey, but whatever,” Macdonald said.

“Chicks love my dog,” Steere offered. “And the close for that is ‘I admit it’s pretty awkward banging a girl doggy-style while he looks on, confused. I feel so guilty—’ ”

“See, that’s a little bit of a confusing joke,” Macdonald cut in sternly. “Because you don’t quite understand why he’s confused. The real joke there is what?”

Macdonald gave a perplexed wince, then burrowed in. “So the joke is”—he started counting off on his fingers again—“he got you girls, you got to have the sex, and you feel bad because you cut off his balls.” He furrowed his brow. “But it sounds like you feel bad because he got you girls and then you cut off his balls. I know you’re not saying that, but it’s the order.”

I sat at the edge of the room, entranced, as Macdonald verbally edited Steere’s whole act in this way, adjusting sequencing, streamlining logic, and fine-tuning for tone, clarity, and pace. It was moving to see how alive he came in the course of that work. And it was moving to witness his generosity, which I noted more than once that day. It is a cliché to find comics beset by the Peter Sellers conundrum: the feeling that there’s nothing there beyond the burst of radiance onstage. Macdonald had elements of that disposition—I was startled to see how nervous and keyed-up he became in the greenroom before his act that night—but the meandering wasteland of his day was also enlivened by a stream of people who had come to lean on him. There was Steere; there was a relative with a mental illness whom he patiently attended to by phone; and there were several friends and comics to whom he’d offered support. He told me that he’d recently put Louis C.K. and Roseanne, both newly personae non gratae, in touch, with the hope that they’d be able to talk through their career collapses—a fact that I reported and that subsequently stirred some controversy around him. His logic, as he framed it then, was that he wanted to be sure that they were strong enough to take their punishments. He was worried about one or another comic he knew ending in self-harm.

There are those to whom that gesture of basic human care will seem beside the point, but it didn’t seem that way to me. To speak of any project of self-betterment in relation to a guy who breakfasts on meat sandwiches with dip is questionable. My sense that day, though, was that Macdonald was working at it in the same way that he worked an audience, offhandedly but hard. Near the start of his faux autobiography, there’s a moment when faux Norm encounters a faux report of his own death on his Wikipedia page. He laughs. Then he studies the line again. “This time I read it the way I imagine a stranger will in a few years or a few decades,” he wrote. “This is my life, then, these words on this screen? Well, it doesn’t add up to much, just a series of facts, and I supposed that’s what a man’s life is, after all, but it’s more than that too. I mean, it has to be, doesn’t it?” He knew it did.