Making a Supercut of the Sounds of Quarantine 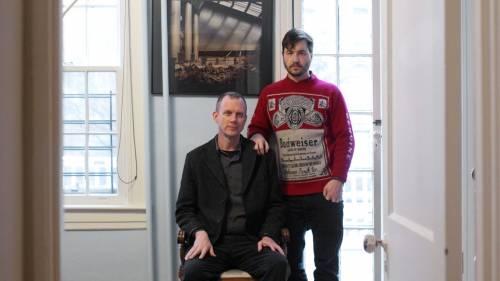 On April 1st, the musician Drew Daniel tweeted a request for people to send him recordings. He would take whatever people sent, he wrote, and stitch them together into a single track about daily life in the age of social distancing, cancelled school, and working (or not) from home. Daniel, who, along with his husband, M.C. Schmidt, makes up the electronic-music duo Matmos, thought that he would get maybe thirty submissions. In the first week, he got forty-five. In the second week, sixty. In the third, eighty. Files came from all over: Brooklyn, Kentucky, Italy, the Czech Republic, Kenya. Some were thirty seconds long or less; some stretched to thirty minutes. Some had descriptive labels—“roasting beets,” “eating apocalypse snacks”—and others were more mysterious. The final result, a fifteen-minute track called “Quarantine Supercut,” went live today at the Creative Independent, an arts Web site published by the crowdfunding platform Kickstarter. The project was originally conceived by Brandon Stosuy, the co-founder and editor-in-chief of the Creative Independent.

Daniel’s résumé made him the track’s perfect overseer (or, in his words, “stitch witch”). Multiple Matmos records were quilted together from piles of thematically similar audio samples. “Quasi-Objects” primarily features samples from around Daniel and Schmidt’s home. “A Chance to Cut Is a Chance to Cure” is built around recordings of medical procedures. “Ultimate Care II” is composed entirely of sounds made by the couple’s Whirlpool Ultimate Care II laundry machine. Asking Daniel to take on the sounds of quarantine was almost comically apt, like asking Andy Warhol over to have a stab at painting your soup cans.

When I first spoke to Daniel, he was still working his way through all the submissions, sorting them into like piles—cat sounds here, homeschooling sounds here, coughs here—and formulating his plan of attack. He was enjoying himself, he told me, feeling like he was travelling without leaving his house in Baltimore, where he teaches English at Johns Hopkins University. But he couldn’t decide on a strategy: should he be aiming for something that would calm listeners down, he asked me rhetorically, or instead for a piece that spoke more fully to the unease and fears of so many isolated lives today?

In the end, he did a bit of both. The track’s opening movement has a soft, languorous vibe. Listening to it, I felt cast back to the earliest days of sheltering in place, when, despite the panic in the air, the whole thing had, for those not serving on the front lines, something of the novelty of a snow day or sick day. Ice clinks against glass. A drink is poured. An electric kettle hisses to life. A cat purrs. A neighborhood’s residents cheer for medical workers, or themselves, or both. Popcorn pops. “We could make bread!” someone says, excitedly.

Around the five-minute mark, though, the tension spikes. A yappy little dog yaps louder than anyone wants a yappy little dog yapping inside. A father pesters his daughter about homework; she tells him that she’s not in the mood. It doesn’t sound like their first time discussing the issue. A Zoom or FaceTime or Google Hangout or Skype meeting glitches. Listening to the speech distorting beyond the point of intelligibility, I felt my heart tightening. Quotidian domestic noises that would not have been out of place in the calm opening section start swirling together in a stereo-panned stress cocktail. “I don’t want to play monster trucks,” a young girl says. “And you’re not leaving me alone, Sam. I want a couple seconds just to myself!”

Things get calm again, but it’s not the same calm—especially because, in a dynamic that many will recognize, it’s hard not to find yourself waiting for everything to get stressful again. The virus itself only appears once, just before the ten-minute mark, when we hear someone listening online to instructions about how to prepare for a visit to a testing site. “The piece is not about the virus,” Daniel told me after he’d finished putting it together. “I’m not going to hospitals, and I’m not trying to do something vicarious about suffering. I’m more interested in social life, in what it’s like for the majority of people—people who aren’t sick or working in hospitals—to live through pandemics, which means moments of pleasure and moments of frustration. I don’t think quarantine has one mood. I think it has these tragic-comedic swerves.”

I won’t say how “Quarantine Supercut” ends—how its interplay of calm and claustrophobic disconnection resolves—just that I found myself surprised, on first listen, how much suspense I felt around the question. It was as if, having entered a simplified miniature model of our new normal, built entirely by snippets of representative sound, I was hoping that it would conclude by showing me the way out or revealing what happened next. This is, of course, too much to ask from fifteen minutes of sound, which in the end can only reveal so much. “Sometimes a potato chip crunching is just a potato chip crunching,” Daniel said. “Sometimes a cough is just a cough.” But sometimes it’s more than that.