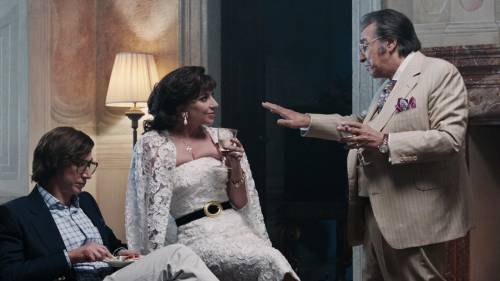 Start with the accents. Ridley Scott’s new movie, “House of Gucci,” is about one of Italy’s most notable and notorious fashion families, but it is an English-language movie starring an extraordinary cast of American and British actors—Adam Driver, Lady Gaga, Al Pacino, Jeremy Irons, Jared Leto, and Jack Huston—who speak in heavily Italian-accented English. This decision renders the movie ridiculous from the start, like a Monty Python parody of the fashion world. It serves no dramatic purpose whatsoever, but it does serve a significant commercial and industrial one: it turns the acting into stunt acting, exposing the exceptional exertion required of the performers in navigating the dialogue’s game of phonic hopscotch. It’s a verbal variety of Oscar bait, an elocutionary version of wrestling the bear, the effortful stunt business that won Leonardo DiCaprio an Oscar for “The Revenant.” The trickery may attract awards, but it does the actors of “House of Gucci” no favors.

The added verbal obstacles are all the more regrettable because the film’s script, written by Becky Johnston and Roberto Bentivegna, is packed with sharp repartee that reverberates fascinatingly far beyond the confines of the characters’ specific troubles. Yet Scott focusses with narrow-minded obstinacy on the troubles at hand, and the movie that results feels like a true-crime TV miniseries sliced and diced to feature length. Jack Webb couldn’t have done a more rigorous job of filtering for “just the facts” than Scott has done, at the expense of any societal and historical resonance that the drama packs and any psychological depth that the characters possess.

The story is centered on the aloof scion of the Gucci clan, Maurizio (Driver), who, in 1978, is a cheerful, serious, carefree law student in Milan, studious, reserved, elegant, relaxed, zipping around town on a bicycle, a clip around the ankles of his well-tailored trousers. Patrizia Reggiani (Lady Gaga) is the office manager at her father’s Milan trucking company, where she shows up in tight dresses and high heels and endures the catcalls of the truckers hanging around the yard. Ill at ease at a friend’s disco party, Maurizio lingers alone behind an isolated bar; he and Patrizia meet cute when she asks him for a drink and he has to admit that he’s not the bartender. Patrizia asks him to dance, he demurs, she undoes his tie and loosens him up. Then, knowing she’d never see him again otherwise, she takes a seat at a café near his school library, pretends to be a law student, then gives him her phone number—by writing it in lipstick on the windshield of his scooter. It’s the air-kiss of death.

I haven’t yet seen Joel Coen’s forthcoming “The Tragedy of Macbeth,” but I will be surprised if Frances McDormand, for all the force of her artistry, feeds Lady Macbeth’s ambition with the same carnal energy that Lady Gaga brings to the remarkably similar role of Patrizia. As with Shakespeare’s play, everyone knows how the drama of Patrizia and Maurizio comes out: it’s as well known that she paid hit men to kill him as it is that Birnam Wood ultimately came to Dunsinane.

Patrizia shakes up Maurizio’s life in an irresistible whirlwind of sex and fun. After he introduces his new girlfriend to his father, Rodolfo (Irons), the older man makes the cardinal mistake of the disapproving parent: he not only expresses his disapproval (voicing his suspicion that Patrizia is a gold-digger and her father a mafioso) but threatens to cut Maurizio off, and in so doing forces the young man’s hand. Maurizio proposes to Patrizia, moves in with her parents, and takes a job at the family trucking firm, where he wears a uniform and makes friends with other working men. After the wedding—with the Gucci side of the church empty—Maurizio imparts to Patrizia his skepticism about his own family business. For her, though, it’s the prize, and it quickly proves within reach. Rodolfo’s brother, Aldo (Pacino), who owns the other fifty per cent of the business, considers his own son, Paolo (Leto)—an aspiring designer—to be a tasteless idiot, and he wants to lure Maurizio into the business. When he does so (with Patrizia as his persuasive proxy), she grabs hold of it with both hands: as a member of the family with a place at the table in meetings, and as the wife of a still-diffident potentate whom she has wrapped around her finger. But catastrophe follows quickly. Maurizio’s role in the company comes at a high emotional and moral price, and, when he tires of paying that price, he becomes disillusioned with Patrizia and seeks a divorce, inspiring her to exact the ultimate revenge.

Throughout “House of Gucci,” certain themes of underlying power and overarching breadth threaten to break through to the action and bring some substance to the movie—namely, the uneasy connection of family businesses and of capitalism, the inefficiency that inheres in inherited power, the inevitable and painful transition from dynasties to partnerships and publicly traded companies. These subjects are at least glancingly touched on in several sharply written scenes of fascinating boardroom maneuvers, but they remain isolated: Scott treats the Gucci saga as a mere yarn (albeit a ripping one), the cinematic equivalent of a series of jovially recounted barstool anecdotes that void the story’s social implications and haunting psychology. Patrizia is a Lady Macbeth without depth—without a sense of the deep twistedness that her ruthless behavior suggests, without any hint of the violence in her character. She has nerve and flashes of wit, but her relationship with Maurizio is a blank, the substance of their life together kept rigorously offscreen. It’s a key plot point that Patrizia calls in to a TV clairvoyant, Pina Auriemma (Salma Hayek), who becomes her confidant and co-conspirator. The women’s connection suggests the class differences between Patrizia and Maurizio, but those differences go completely unexplored, asserted only when they conveniently push the action along.

The movie’s essential hollowness is all the more dismaying for its absurdly glorious moments of pop-iconic grandeur—most of them sharpened by Gaga’s screen-commanding gestures. Scott revels in such melodramatic touches as Patrizia holding up her hand with a spring-loaded intensity to flaunt her wedding ring, and—in a sublime bit of chutzpah—striding with the air of a conqueror into the family home after the murder is carried out. “House of Gucci” is Gaga’s movie, and she tears into it with an exuberant yet precise ferocity. She is the main reason why the movie at times transcends the limits of its scripted action. Her performance is an unusual one, all forceful gesticulations and high-relief inflections; she’s not expressively complex in repose except through the flaming power of her furiously fixed gaze, which is the movie’s dominant visual trope. Given her lack of extensive theatre training, though, the accent shtick leaves her at an inherent disadvantage beside her co-stars. She sounds somewhat like Natasha from “Rocky and Bullwinkle.” I can’t get out of my head Patrizia’s response to Rodolfo when he asks about her interests: I’m a “pipple pleaser,” she says.

Driver is the onscreen M.V.P. of the past decade in movies, and he copes gamely with the constraint; it’s the writing in “House of Gucci” that lets him down. There’s not enough doubt or equivocation in Maurizio’s transformation to support the quizzical intellectual distraction that Driver brings to the character. He gets one good gesture in—a gleeful solitary leap over a sofa in his splashy new Manhattan office, a moment of “it’s good to be the king” that, rather than inaugurating his new reign of inner conflicts, waves them away. (Scott offers one fine touch for Maurizio, though it’s not a moment of performance but of design—a glimpse of his family-brand loafers that he wears while riding his scooter and trying to get past Swiss border controls.) There are other such moments, too, mainly involving Pacino, the one actor in the bunch who seems hardly inhibited by the compulsory accent stunt. Pacino brings to Aldo the grandeur that comes with fortune and power, and also the sardonic humor that’s the actor’s natural trait. He adds shiny flourishes even to such casual sequences as a telephone call inviting Rodolfo to his birthday party. Scott strains after such touches of flashiness (call them melodramatic bling), as if dousing the entire production in an element of sensation will compensate for merely functional storytelling serving in lieu of characters or ideas.

Though “House of Gucci” is centered on the world of fashion, it above all displays an appalling lack of style. Neither the craft of making clothing and leather goods nor the delight in handling them nor the transfixing delight in merely looking at them are allowed to knock the storytelling off its relentless, single-minded, crowd-pleasing pace. Plenty of fashion objects are seen in the course of the movie; none is lingered over, and the lack of contemplation is apparent visually no less than dramatically. With its indifference to the physical stuff of its subject, the thematic implications of its story, and the psychological twists of its characters, “House of Gucci,” in its briskly efficient professionalism, is the very exemplar of one-size-fits-all dramaturgy, of off-the-rack cinematic style, of directorial hack work.

An earlier version of this article misidentified the film’s screenwriters.