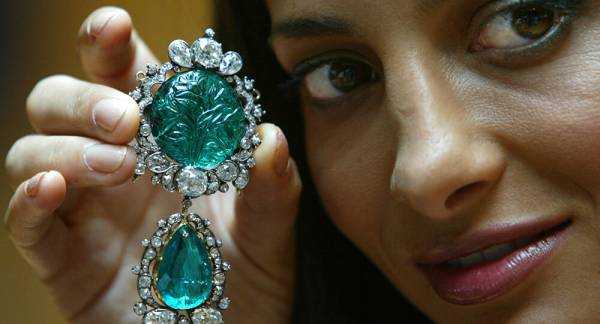 New Delhi (Sputnik): The 200 years of British rule saw officials working under the Crown looting Indian jewels, armours and sculptures worth $45 trillion today, according to a study. Such rare artefacts are often seen going up huge bids at auctions in the West.

A pair of gold-plated rimmed, circular glasses reportedly belonging to Mahatma Gandhi — Father of the Nation — is set to be auctioned for about $19,000 on August 21 in London. Unlike other Indian artefacts, this one was not stolen but was a gift. Dropped at the auctioneer’s office in Bristol, southwest England, the note with the glasses read: ‘These belonged to Gandhi, and my uncle was given them when he was working in South Africa’.

The auctioneer of East Bristol Auction, Andy Stowe, quoted by the CNN, has found that the dates and the facts match up fine. While the auctioneers are expecting the bids to go higher than what they have priced, here’s a look at some other Indian artefacts which fetched big amounts under the hammer.

1. The Sword of Tipu Sultan

Rare artefacts from the pioneer of rocket artillery and ruler of Mysore Tipu Sultan’s armoury, including his personal sword, fetched £107,000 during a 2019 auction in Berkshire in southeast England. The highlighted items included a silver-mounted 20-bore flintlock gun and bayonet, a gold-encrusted sword and suspension belt ensemble, and personal swords of the Mysore’s last king. The items were brought back by Major Thomas Hart of the East India Company after the Sultan’s defeat at Seringapatam in 1799.

In 2019, the Maharajas & Mughal Magnificence collection comprising a 17-carat Golconda diamond “Arcot II” owned by the Nawab of Arcot, antique diamond Riviere necklace belonging to Nizam were among the 400 lots of royal Indian jewellery that sold for $109,271,875 / £87,138,656.

The exhibition by global auction house Christie’s in New York is the highest for any auction of Indian art and Mughal objects. A Ceremonial Sword of the Nizam of Hyderabad bagged $1,935,000, establishing a new World Auction Record for an Indian Sword.

In a fierce bidding war in 2018, an emerald and seed-pearl necklace owned by Queen Jindan Kaur, the wife of Sikh emperor Maharaja Ranjit Singh, was sold for £187,000. Jindan Kaur’s necklace was among a number of treasures from the Lahore Treasury auctioned as part of the ‘Bonhams Islamic and Indian Art Sale’. Kaur moved to England in 1843, where she was reunited with her son and jewellery.

4. Memorabilia Including Possessions of Mahatma Gandhi

A sale of rare Indian memorabilia comprising Mahatma Gandhi’s most prized possessions, historical documents and artefacts by Mullock’s auction house in Shropshire in 2013 fetched £212,499, of which £149, 485 were collected from items that belonged to Gandhi. His eight-decade old mobile spinning wheel he used in Yerwada jail during the Quit India Movement went for £110,000.

Another auction of Mughal items by Christie’s in 2004 fetched £4.7 million. The items were brought to Britain by Robert Clive, who is credited with laying the foundation of British rule in India with the 1757 Battle of Plassey. It is unknown how he got the items to Britain, butthe  highest selling item among the collection was a 17th century jewelled flask that went for £2.9 million.

AFP 2020 / JIM WATSON. The Clive of India treasure rests in a case at Christie’s auction house in London 10 February 2004 with a jewelled jade flask in the center. The jade flask was produced for the Mughal royal court in India in the 17th century and will be offered for sale at Christie’s 27 April 2004 and is expected to fetch in excess of 1 million pounds (1.465 million euros) as the highlight of the rare collection brought back from India by Robert Clive