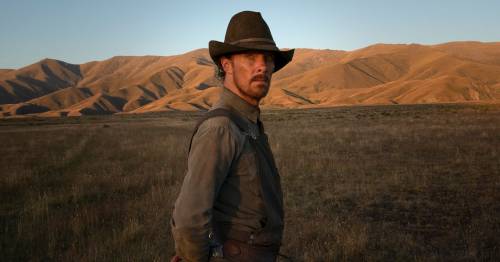 Arguably the most celebrated female director of all time, Jane Campion returns with a Western psychological drama that boasts gorgeous performances and haunting filmmaking.

In the early 1920s on the edges of a frontier town in the American West, dominating rancher Phil Burbank (Benedict Cumberbatch) rules his property alongside his quiet but ambitious brother George (Jesse Plemons).

While Phil is content with the status quo of their repetitive existence and friendships with ranch hands, the more refined George longs for more and finds it when he falls in love with widow Rose Gordon (Kirsten Dunst).

As a result of the marriage, Rose’s teenage son Peter (Kodi Smit-McPhee) also becomes a visitor to the farm and finds that both he and Rose are not welcome in the eyes of the hostile and brooding Phil who seeks to torment the new arrivals.

Phil (Benedict Cumberbatch, left) and George Burbank (Jesse Plemons) run a ranch in the American West in The Power of the Dog
(

Capturing the desolation of the story’s surroundings, the buried traumas of its characters and the powerful sense of foreboding, The Power of the Dog is another career-high from Campion who is best known for her work on The Piano and the Top of the Lake series.

First and foremost, the central four characters are so wonderfully cast. We know Cumberbatch best for his loveable eccentric roles but here he plays a genuinely sinister and toxic individual in Phil Burbank. Brooding, masculine and dangerous, the presence of him here is magnetic and intense and adds a later of danger to the film in what is the actor’s best work to date.

Meanwhile, Plemons delivers the most understated turn but mines a quiet melancholy and longing for change that feels just right for George.

Plemons’ real-life partner Dunst has made many a film where she expertly captures sadness but here this is combined with paranoia and fear as Rose finds her new love story increasingly eroded by the subtle torment from Phil.

Finally, it is Smit-McPhee who is also another scene-stealer. Quietly sinister yet oddly likeable, he makes Peter an enigmatic character whose connection to Phil adds to a dramatic tension that builds and builds into a curious climax.

Accompanying her stars, Campion utilises the expansive vistas captured by cinematographer Ari Wenger to great effect, along with the often panic-inducing and disquieting score from Jonny Greenwood who continues to be a composer at the top of his game.

Taking the source material from the novel of the same name by Thomas Savage, The Power of the Dog examines notions of traditional masculinity, repressed desire, anxiety, and the earthy yet fading ways of rural life in meditative and powerful detail.

Playing with tension, characters' psychological details and the well-worn trappings and ideals of the Western genre, Campion's film gathers its more frightening qualities towards its end as the enigma of Phil Burbank slowly unfolds.

Ultimately, The Power of the Dog is a wondrous achievement and will linger long in the memory as a magnificent sight hidden in drab surroundings.

The Power of the Dog is a haunting psychological drama from director Jane Campion that boasts a career-best performance from Benedict Cumberbatch.

Previous : Last Christmas was grim, Bethlehem hopes this year will be better
Next : WTA insists Peng Shuai’s IOC video call does “not alleviate or address concerns”