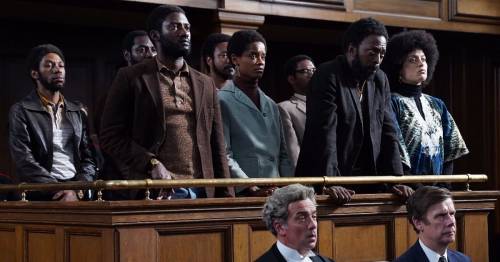 "We mustn’t be victims but protagonists in our own stories," preaches Letitia Wright’s Altheia Jones-LeCointe in a vital speech during Mangrove.

This message feels very much characteristic of the core themes at play in the first instalment of director Sir Steve McQueen’s Small Axe anthology of films.

Beginning in 1969 in the Notting Hill area of London, Mangrove follows the eponymous Caribbean restaurant owned by Frank Crichlow ( Shaun Parkes ), whose business becomes a focal point of the local Black community and becomes a safe space for the sharing of ideas, experiences, and culture – including with visits from Black Panther activists.

However, Frank and the Mangrove come under threat from the local police who begin to use fabricated excuses to raid the restaurant and leave it in disarray, in an attempt to destroy a true hub for the local community. 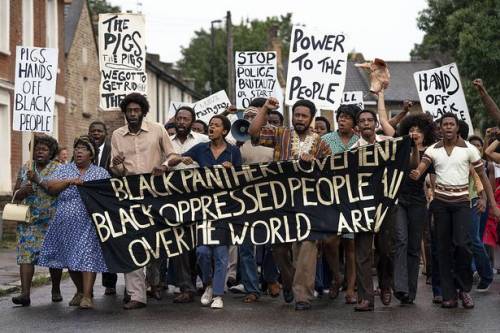 Protesters stand up for their community against injustice in Steve McQueen's Mangrove
(Image: BBC)

Refusing to be pushed down into submission by the police, Frank and his allies unite in protest of police behaviour. Then, when violence breaks out as police try to shut down the protest, nine Black activists are arrested for trying to incite a riot, prompting a lengthy and fiery legal battle.

McQueen instills a heat into Mangrove, with a warmth for comrades and friends and shared culture and values providing a hearty glow to proceedings, whilst also providing a fiery rage against years of abuse and injustice.

Detailing a relentless cycle of oppression by an abusive institution against an entire community, all the way through to the corruption of the British judicial system, Mangrove inspires anger but not despair as nine intelligent activists articulate and disseminate the truth of their struggle. 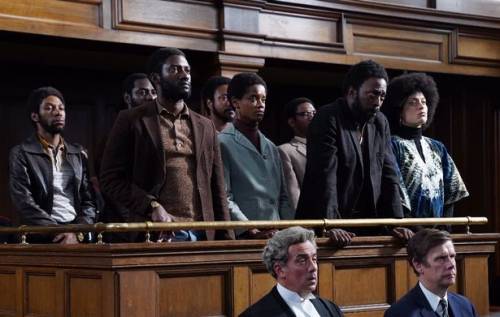 'The Mangrove Nine' face unjust charges at the Old Bailey
(Image: Courtesy of the BBC)

The entire ensemble of performers delivers work with grit and truth. Highlights include Shaun Parkes, who offers a courageous yet vulnerable anchor for the film in Frank, whose journey through the film is certainly the most rewarding. Elsewhere, Letitia Wright radiates charisma as British Black Panther speaker Altheia, while Malachi Kirby emits majesty – particularly in a poetic monologue towards the end of the film – as vocal broadcaster and activist Darcus Howe.

Beginning with and ending with the vibrancy of the Mangrove community, even when amid the pain and toil of racial prejudice, is where McQueen finds the film’s beating heart. The director also excels in the smaller details during the rallying courtroom battles that wage. 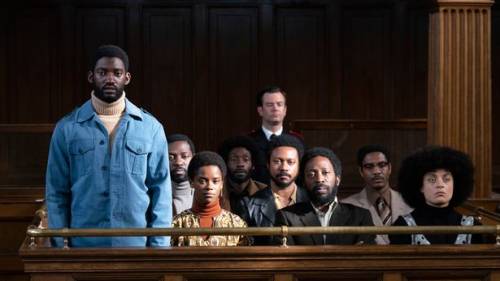 Elsewhere, in addition to superb period costume and recreation of scenery and production design to feel truly authentic to the time in which it is set, the score by Mica Levi also fits so naturally but appropriately to the film whilst remaining understated and distinct.  The aesthetics are a true match to the performances, script and direction.

Ultimately, Mangrove is a true testament to McQueen’s skill as a filmmaker and its portrayal of abuses towards Black communities by those in power feels both specific and yet widely relevant.

Mangrove is a stirring, pulsating, and heartbreaking piece of filmmaking from Steve McQueen that not only provides an account of historical injustices but also speaks to the here and now.

Mangrove is the opening gala film of London Film Festival 2020 and will air on BBC One on November 15, 2020.

Previous : Nobody review: Bob Odenkirk is ‘likeable action star’ in ‘brutal’ new thriller – Lewis Knight
Next : Harry Cobden to return at Newton Abbot on Friday after surgery on fractured cheekbone