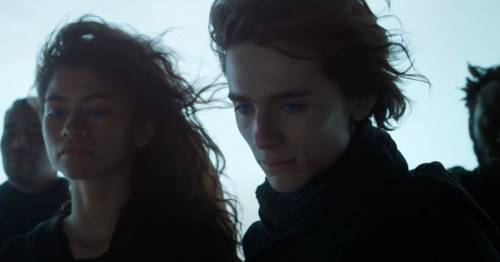 Timothee Chalamet and Zendaya are seen locking lips in the surprisingly romantic new trailer for Dune.

The sci-fi epic from Blade Runner 2049 director Denis Villeneuve is the latest adaptation of Frank Herbert's classic novel of the same name and is the first of a two-part cinematic take on the source material.

Set in the far future in a galactic empire, Timothee stars as Paul Atreides, the young scion of the noble House of Atreides, who awakens from dreams of the beautiful Chani (Zendaya), a woman he has never met and who is a member of the native population of the planet Arrakis – a desert world that is being plundered by imperial colonisers for its rich natural resources.

Pau's father Duke Leto Atreides ( Oscar Isaac ) is tasked by the Emperor to become the new steward of Arrakis, so the House of Atreides move to this dangerous world.

However, the family and their servants and advisors – including warrior Duncan Idaho ( Jason Momoa ) – find dangerous enemies in the form of the planet's former steward, the monstrous Baron Vladimir Harkonnen ( Stellan Skarsgard ) and his violent nephew Count Glossu Rabban aka The Beast ( Dave Bautista ).

Soon, Paul and his mother, the powerful Lady Jessica (Rebecca Ferguson) find themselves under attack and forced out into the dangerous and mysterious deserts of Arrakis where destiny awaits.

The new footage emphasises the connection of Paul and Chani in the film, with Timothee and Zendaya seen locking lips in the footage, whilst the expansive shots of the landscapes and explosive action sequences will no doubt be of interest to viewers.

Paul dreams of the mysterious Chani (Zendaya) before he ever meets her
(Image: Warner Brothers)

Also starring in the film is Josh Brolin as the Atredies' weapons master Gurney Halleck, Charlotte Rampling as the all-knowing Reverend Mother Gaius Helen Mohiam, and Oscar-winner Javier Bardem as Stilgar, the leader of a group of Arrakis' native population, known as the Fremen.

Events in the trailer grow increasingly chaotic and bloody as House Atreides and their allies become plunged into the prospect of revolution against the brutal forces suppressing the people of Arrakis in order to gain access to its all-important resources.

War breaks out in fiery battles for the planet of Arrakis
(Image: Warner Brothers)

Yet, in the process, Paul must also survive the titanic sandworms of the planet's desert.

Will Paul and his allies survive?

A prequel television series entitled Dune: The Sisterhood is already in development at HBO Max, with the film receiving a simultaneous theatrical and digital release in the US.

Development is already underway on the second part of Dune which will adapt the second half of the original novel.

Paul fights for the survival of his family and Arrakis' people, the Fremen, from dangerous enemies
(Image: Warner Brothers)

Can Paul and Chani save Arrakis and, perhaps, even the entire galaxy?
(Image: Warner Brothers)

The novel was previously adapted by director David Lynch in 1984 and starred Kyle MacLachlan and Sting but was a box office bomb and received overwhelmingly negative reviews. However, it has since developed a cult following.

Dune is due to get its premiere at the 2021 Venice Film Festiva later this year.

What do you think of the trailer for Dune? Let us know in the comments below.