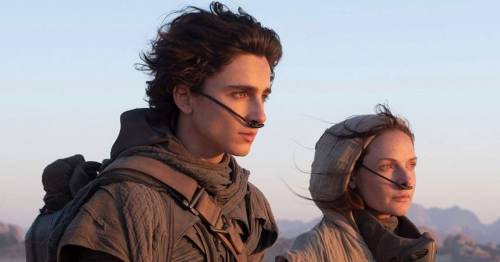 Denis Villeneuve’s Dune is truly the sci-fi epic of a generation.

Based on Frank Herbert’s iconic novel of the same name, this latest adaptation of Dune tackles the first part of an epic story of revolution, warring families, and the power of destiny.

In the distant future, the intergalactic Imperium thrives on the fuel known as melange or ‘spice’ which is an addictive substance that can cause visions, prolong life and enable space travel.

The noble House Atreides is charged with being the new stewards for the only source of spice – the desert planet Arrakis, also known as Dune.

However, a trap is laid for the Atreides by their arch-enemies House Harkonnen, prompting the young heir Paul Atreides ( Timothee Chalamet ) and his mother Lady Jessica (Rebecca Ferguson) to flee for their lives into the desert where destiny awaits them.

Capturing a scale, grandeur and weighty ambition not seen since the likes of Lord of the Rings and Star Wars, Denis Villeneuve brings the stylish filmmaking that saw his film Blade Runner 2049 become so revered as a modern sci-fi classic but with an added personal touch noted from his film Arrival.

Choosing to only adapt part of the mammoth novel was a wise choice, enabling Villeneuve to flesh out the lead characters and build a vibrant world for them to inhabit.

Importantly, the casting has been wonderful here. Timothee Chalamet completes his ascension to Hollywood leading man status, capturing the difficult character of Paul. Simultaneously boyish but weighed down by fate, in touch with his femininity but still a man’s man, Chalamet brings charisma and gravitas in spades.

Timothee Chalamet as the noble Paul Atreides in Dune
(

Paul dreams of a woman on Arrakis – where his destiny awaits
(

Another piece of pitch-perfect casting is Rebecca Ferguson as the concubine Lady Jessica. Much of the plot in Dune is a result of Jessica’s decision making and her duty to her religious practices as part of the matriarchal order known as the Bene Gesserit, with Ferguson delivering regality, serenity, danger, and power to the screen.

The rest of the ensemble are also excellently cast, from Jason Momoa as the charming swordsman Duncan Idaho, to Oscar Isaac as the noble Duke Leto Atreides, and Charlotte Rampling in a brief turn as a solemn priestess, Reverend Mother Mohiam.

Of course, such an epic would be incomplete without its villains. Stellan Skarsgard is thoroughly repugnant as the monstrous Baron Vladimir Harkonnen but in manner that does not feel hammy in the slightest. Dave Bautista also brings suitable brutality to the Baron’s violent nephew, Count Glossu Rabban.

Elsewhere, Zendaya makes an impression as the Fremen woman Chani, a native person of Arrakis, who appears in Paul’s dreams before he meets her.

However, as she makes clear in the film that this truly is only the beginning and sequels will see hr role expanded further.

Oscar Isaac as Duke Leto Atreides, the new Steward of Arrakis and father of Paul
(

Jason Momoa as Duncan Idaho, a swordsman for House Atredies
(

The Fremen as a whole are quite distant characters in this first instalment but one hopes they get fleshed out further in the next instalment.

Appropriately, the expansive and often shifting landscapes of the planet Arrakis are so vividly observed in Villeneuve’s vision, with gorgeous cinematography from Greig Fraser and terrific production design across the board.

Thankfully, the practical effects and locations take precedence over VFX but this is state of the art and equally gorgeous when executed.

These are aided by Hans Zimmer’s alien-sounding and ethereal score which sounds fresh and familiar all at once, giving a whole new dimension to the film.

Zendaya as Chani, a native Fremen warrior from Arrakis
(

There is action in spades too with explosive battle scenes
(

The gritty sensibility of Villeneuve’s vision pushes the influences of historical empires and aristocracies and brings to life the complex themes of colonialism, feudalism, religion and the corruption of power.

There is action, romance, mythology, the supernatural, and the political, meaning there is something for audiences outside of sci-fi and fantasy fans.

Should this film series not continue after this it would be a crying tragedy that such a story epically told does not get to continue.

Ultimately, Dune is the first chapter in what could be a sci-fi epic series for the ages.

Dune is the sci-fi epic of a generation that is breathtaking, thought-provoking and gripping with a cast at the top of its game. Timothee Chalamet and Rebecca Ferguson are the true stand-outs.