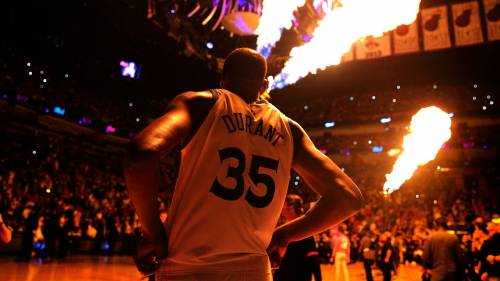 One revelation of life without sports is that I miss the games less than I thought I would—there are only so many ways for a team to win or lose. What I actually miss is all the ambient, extracurricular stuff that fills the rest of the calendar: the wheeling and dealing, the rumors and speculation, the storytelling that gives shape to struggle. At some point during the past decade, every professional sports league became a year-round business, never quite vacating a hard-core fan’s periphery. The N.B.A., when it was fully operational, didn’t ever really stop: the season ran from October through mid-June, by which time there was the draft (late June), free agency and summer league (July), and then training camp and preseason (September). The fans have followed along: they want to understand a team’s long-term planning and speculate about its future, looking toward possible tweaks that might not unfold for years.

In another life, Ethan Strauss, a reporter for the Athletic, may have covered the behind-the-scenes machinery of city politics or the business sector. He seems preternaturally interested in institutions and how to demystify them. Rather than reheating N.B.A. talking points, Strauss delves into how professional basketball works organizationally. “The Victory Machine: The Making and Unmaking of the Warriors Dynasty” is his book about the 2018-19 Golden State Warriors, one of the most talented basketball teams ever assembled. The Warriors had won three championships in the previous four years, and they likely would have won another that season were it not for untimely injuries to Kevin Durant and Klay Thompson, two of their best players. But the book isn’t really about the Warriors’ style of play or their place in N.B.A. history. It’s barely about basketball. It’s essentially a workplace drama revolving around thirty or so incredibly wealthy and psychotically competitive people—players, agents, management, ownership—united in professional purpose yet also seeking their own versions of personal fulfillment.

Strauss has been writing about the Warriors since 2010, back when relatively few people wanted to read about them. He came of age alongside the Warriors’ homegrown core of Stephen Curry, Thompson, and Draymond Green, which, in 2015, brought the Bay Area its first championship in forty years. But the admiration and good vibes dissolved in the summer of 2016, when the Warriors signed Durant, a former rival and the human equivalent of a cheat code. The team’s success became conflated with Silicon Valley as a whole—one of its owners, Joe Lacob, crowed that the organization was “light-years” ahead of other teams. A franchise that had been a pitiable laughingstock for decades had come to seem smug and entitled.

It’s hard to convey how unlikely all of this seemed to someone who grew up watching the Warriors back when they were scrappy but irrelevant. I could never have imagined that the team would win anything of note; even more improbable was the idea that it could become a destination for a superstar like Durant, who, as Strauss reports, hoped that winning titles with the Warriors would elevate him above LeBron James. But critics and opposing fans felt that Durant had simply joined a ready-made winner. For the entirety of the 2018-19 season, the last of Durant’s contract, the question of whether he would continue to play with the Warriors hung uncomfortably in the air. He could stay and secure a dynasty for years to come, or opt for free agency and try to build something new for himself.

While Strauss clearly loves the sport, he also treats the N.B.A. as a reflection of the “Darwinian contest” prized by American society, and writes about it without romance. Loyalty to a team or a city can seem silly when an élite player’s longest-term economic relationship might be to their shoe company. Given that players can sign a shoe deal before getting drafted, and work for Nike or Adidas well into retirement, Strauss states that “an NBA team is impotent by comparison.” Strauss wrote one of ESPN’s most popular stories of 2016, piecing together the inner workings that convinced Curry, a generational basketball talent, to leave his Nike sponsorship and move to the comically unloved apparel company Under Armour. When Durant joined the Warriors that year, it wasn’t just a question of whether he and Curry could share the ball. It was also a question of whether Nike, via Durant, was quashing the one team that was making Under Armour relevant.

Strauss is interested in workplace culture, decision-making processes, and hierarchies, and he carefully maps the web of intermediaries and liaisons between players, their teams, and their business interests. That basketball players are wealthy doesn’t make them immune to the resentments or paranoias present in any office setting. We’re just accustomed to seeing them as heroes and villains, rather than as workers within an org chart. Strauss offers insights into how power gets played out in personalities—the motivations, insecurities, and over-all vibe of people who are often insulated from judgment. His wonky air equips him to talk shop with the Warriors’ executives and management. He describes Lacob as “accidentally quite entertaining,” despite disagreeing with the owner’s libertarian politics. Elsewhere, Strauss adds texture to the coach Steve Kerr’s nice-guy persona, when Kerr mutters under his breath about an overeager autograph hound.

In February, 2019, Strauss’s doggedness actually got him in trouble, when he reported that many within the Warriors organization saw Durant’s departure as inevitable. Perhaps the only surprising aspect of Strauss’s piece was that someone close to the situation had confirmed it. But Durant tried to make an example out of Strauss and his anonymous sources. After steering clear of reporters for a few days, Durant said, “You got a dude, Ethan Strauss, who come in here and give his whole opinion on stuff and make it seem like it’s coming from me. He walk around here, don’t talk to nobody, just walk in here, survey, and write something like that.” The situation, Durant explained, represented why he loathed talking to the media. It was a no-win situation. “I just don’t trust none of y’all. Every time I say something, it gets twisted up and thrown out in so many different publications, to try to tear me down with my words that I say. So, when I don’t say nothing, it’s a problem. I just want to play ball. I want to go to the gym and go home. That’s all. Is that a problem?” It struck many as odd that one of the most prominent athletes on the planet saw fit to eviscerate a reporter.

The most absorbing chapter of “The Victory Machine” revolves around this incident. Strauss recounts first meeting Durant by chance at a San Francisco hookah bar, shortly after the superstar had signed with the Warriors. It’s an odd and charming scene. It happened to be Fleet Week, and Durant kept welcoming random servicemen into his V.I.P. section. He was “quietly curious” about their backgrounds and day-to-day experiences, humbly listening as they shared their ambitions. But Durant also comes across as pensive and world-weary, joking to his new friends that it was only a matter of time until some media chump—such as Strauss—would proclaim his career over.

N.B.A. executives have grown concerned with any seeming unhappiness among their top players. In order to reach the league, players have had to be single-minded in their pursuit. It’s understandable that when they reach their mid-twenties, and are finally able to catch their breath, they may feel a spiritual void, a loss of meaning, a disdain toward the amount of attention and scrutiny that surrounds their lives. Even when Durant gets embroiled in Twitter beefs with random fans, it seems driven by restless neurosis, not petulance. “Not only was Kevin Durant insecure,” Strauss writes, “but he was especially insecure about his insecurities.” He describes his attempts to reach out to Durant in the days after their February blowout. Other players intervened, encouraging Strauss to simply apologize, even if he didn’t feel like he was in the wrong. Meanwhile, Strauss was sucked into the proverbial “take zone”—debated on sports-talk television and radio, praised and pilloried by people he will never meet. It’s the zone that Durant lives in every single day.

Over the past decade, sportswriting, especially on the Internet, has evolved from a partisan, Bill Simmons-style zealotry to a more regimented, analytics-based approach. At the same time, players have taken control of their own narratives through social media or athlete-run programs, such as James’s Uninterrupted network or Durant’s own “The Boardroom” video series.

Strauss is stubbornly professional, refusing to apologize—how would he be able to continue doing his job if he folded to attacks? He writes about his brush with Durant with a kind of confidence, not in a way that feels vengeful. But it’s striking how secure he sounds compared with Durant, who has become a poster child for the melancholy superstar. That differences of race and class might be overcome within the boundaries of the game remains one of the beautiful things about sports. Yet the same background that allows Strauss to chat up Lacob and Kerr also makes the paranoid and easily peeved Durant seem profoundly unrelatable to him. Strauss can sympathize with the weirdness of life in the “take zone,” but he still can’t fathom what it’s like to be Durant. This disconnect feels like a snapshot of a changing sports-journalism landscape, in which players and writers navigate the same social-media space and friction between the two seems inevitable—and endless. Months later, with Durant settled in Brooklyn, Strauss texted him to see if he would talk to him for “The Victory Machine.” It feels like due diligence but also like a chance for Strauss to eke out one more anecdote for the book. “Fuck u, fuck your sources and your book,” Durant replied. He’s no longer on the team, but he’s on the cover of the book, anyway—alone.

Previous : Some 1.2 million Americans won’t get stimulus checks because they’re married to immigrants
Next : Ireland Expects ‘Yet Another Crisis Point’ in Brexit Talks if No Progress Reached Soon