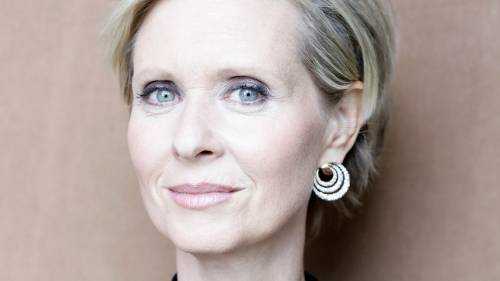 When Cynthia Nixon was eleven years old, she auditioned for a workshop with the director Mike Nichols. Nixon, who is now fifty-one, recently described the thinking behind her strategy at the time. “You know, child actors, they’re so annoying, and they’re constantly selling themselves,” she said. “I thought, I’m going to be really crazily introverted and seem fascinating. I gave one-word answers. Of course they were like, ‘Thanks so much. Next!’ ” She added, “I just had this idea of being deeply interesting, like, ‘I’m not great at selling myself, but if you just come over here, and take a closer look, wow! You’re not going to believe it.’ ”

In a way, Nixon said, she has always been interested in portraying people who resist performing. She is at her best when she plays women who exert a gravitational pull on their audience without, as she put it, “wanting to look so crass as to go to them or present yourself in a certain way.” She now thinks of this as “an Emily thing”; in one of her latest projects, Terence Davies’s bio-pic “A Quiet Passion,” Nixon plays an Emily Dickinson who is quick to laugh and to dazzle others with her wit, but who often turns away would-be suitors and friends. Though many scholars have said that Dickinson was more social and less opaque than the hermetic mythology that surrounds her suggests, Nixon’s Dickinson is as bitter and distant as she is desperate for connection. After watching the film, The New Yorker’s Richard Brody wrote of Nixon that “her incarnation of Dickinson seems to rise outward from the bone; she seems frozenly poised with, yes, a quiet passion that’s all the more impassioned for its unplanned quietness.”

As a child, Nixon recalled recently, over lunch at the Coffee Shop, in Union Square, she had a recording of Dickinson’s poetry, read by the actress Julie Harris; she played it incessantly in the Manhattan apartment that she shared with her mother, Anne Knoll Nixon. Nixon’s mother and her father, Walter, a radio journalist, separated when Nixon was six years old. Anne, who had attended the Yale School of Drama, coached actors, including the “imposters” who tried to stump the panelists on the game show “To Tell the Truth.” In 1975, when she was nine, Nixon made her television début on the same show, wearing a cowboy hat and pretending to be a junior equestrian champion. Nixon said that she wasn’t “exactly shy” as a child but felt “daunted by groups, by being in groups.” Her mother supported her theatrical aspirations, but didn’t push her to be a starlet. “She didn’t want me to have too much acne, and she didn’t want me to be overweight, and she loved the fact that I was blond,” Nixon said. “But, other than that, there was very little focus or conversation about how I looked, or how I should look.”

The next time that Nixon auditioned for Nichols, at seventeen, he cast her in two Broadway plays at the same time. Every night, while she was a freshman studying English at Barnard College, she appeared as Donna in David Rabe’s “Hurlyburly” and as Debbie in Tom Stoppard’s “The Real Thing,” racing the two blocks and cutting through the lobby of the Edison Hotel to make curtain calls at both theatres. She quit this gruelling schedule after three months—“because I was panicked I would flunk my geology final,” she has said—but Nixon’s stage career continued its ascent. She was lauded for her performance as Juliet in the New York Shakespeare Festival and replaced Marcia Gay Harden on Broadway as Harper Pitt in “Angels in America.” She was also nominated for a Tony for “Indiscretions,” opposite Jude Law, in 1995. “Everyone wanted to be Cynthia, including me,” Laura Linney said recently in a joint interview promoting a new Broadway revival of Lillian Hellman’s “The Little Foxes.” Linney turned to Nixon, dressed in a sleek black blouse, and said, “You were a Broadway staaaaah.” In a canny bit of stunt casting, Linney and Nixon will alternate the lead roles of Regina Hubbard, an avaricious woman who is desperate to inherit her family’s fortune, and Birdie, an alcoholic housewife who appears only in the second act. (“I know Birdies. I am a Birdie,” Nixon told me. “I don’t really know any Reginas. She is more of an idea of what happens to an alpha woman thwarted, how you become mean and ruthless. Though, I guess when you live as long as Laura and I have, you find out you have her inside you somewhere.”)

By the nineties, Nixon had become a versatile stalwart of the New York theatre scene, the kind of actor sometimes described as a “hoofer.” Nixon seemed content with that. “The pure functionality of it makes for a lot of sanity,” she told me. “Getting on a subway, going to a show, passing Liev Schreiber, who’s going to his stage door, you know? You have to be at the theatre a certain time. You’re responsible.” She worked regularly, settled down with Danny Mozes, a high-school English teacher, and had two children, who are now twenty and fourteen. Nixon told me that if her acting career had ever slowed, she might have considered becoming a therapist—though an “active” one who talks back, she added, rather than a Freudian analyst. “My grandmother was a bacteriologist,” she told me. “I come from working women.”

When Nixon got the call for “Sex and the City,” which débuted, on HBO, in 1998, her agent had to ask her to “put on a little lipstick” before the audition. For the next twelve years, six seasons, and two movie sequels, Nixon played the lawyer Miranda Hobbes with a similar lack of vanity: a woman who has fallen into haute femininity by way of an ambitious career. Nixon, already adept at playing outcasts and intellectuals, understood that Miranda was integral to, but not fully of, the gang of fashionable women who composed her friends. Miranda was the only character on the show trying to shatter a corporate glass ceiling while also nursing a baby. Miranda put a tray of Betty Crocker brownies in the trash to keep from eating them, then fished them out and polished them off. She wept in a shabby dressing room while picking out a bra to wear to her mother’s funeral, which she attended without a date.

Today, Nixon views “Sex and the City” “like an ex-husband that you’re friends with” or, sometimes, like “Athena’s owl” sitting on her shoulder. The end of the show brought with it a new life. In 2003, a year before the show’s final season, she separated from Mozes and started dating the political organizer Christine Marinoni. A slew of paparazzi followed her around, pressing her to define her sexuality; there was some controversy around Nixon’s suggestion that she had chosen to be gay, before she clarified that she was bisexual, and that the choice had been whether to be in a gay relationship or a straight one. Strangely, what bothered Nixon most, during that time, was that the press continued to call Marinoni, whom Nixon married, in 2012, and who gave birth to their son, in 2014, an “activist.” “Like, she has an actual job that she’s trained in and she gets paid for,” Nixon told me. “And ‘activist’ sounds like, you know, a movie star who goes to a protest.” If anyone fits the latter definition, she added, it’s probably her. In recent months, she’s spoken at the New York Women’s March and at an L.G.B.T. rally at the Stonewall Inn; she wrote her speech for the Stonewall rally on a plane the night before, channelling her discussions with Marinoni.

In the course of our conversation, I noticed that Nixon often divides the world into “thinkers” and “actors” (or “doers”). Nixon is an actor with a talent for channelling thinkers. When we discussed Dickinson’s death, which Nixon makes brutal, even grotesque, she told me that it was the idea of her extreme bodily pain that had helped her inhabit Dickinson’s mind. “I connected to her more on a physical level than on an intellectual one,” Nixon said. “I had to find my way to her, blindfolded.” In the film, Davies uses readings of Dickinson’s work almost like background music; he also gave Nixon many wordless scenes with plenty to do, in order to help her portray an overactive mind. Dickinson, she said, was an obsessive thinker for whom tasks such as baking and gardening offered relief.

In the film, Jennifer Ehle plays Emily’s sister, Lavinia. “They say Emily was the flower and her sister was the waterer,” Nixon said, talking about the poet’s loneliness, the way she was both powerful in her family and powerless in society. “Terence didn’t want her to be solemn or meek about it, though. He thought she was savagely funny. She saw the world around her and herself with a really unforgiving eye. And, when you see the gaps between what’s supposed to be and what is, you can be depressed, or you can see the humor in it.” In preparation for the part, Nixon had immersed herself in Richard Sewall’s biography and several books on Dickinson’s family members—but, she said, “Davies took a few liberties. He was kind of a wild man.” Davies, she added, “is always telling his story, but he tells it through Emily Dickinson.” She recalled that Davies would often gasp and weep during the filming. It was her role, she understood, to translate his emotion into actions, to play the active therapist.

For the second half of the film, after she has given up on the idea of marriage and has started to suffer from overwhelming pain caused by Bright’s disease, Nixon as Dickinson wears a simple white cotton dress. Historians argue about whether or not it was a wardrobe staple of the poet. Davies uses the dress—as Dickinson likely did, too—as a symbol. In it, Nixon looks older, smaller, a bit lumpen, less socialized. Requiring no corset, the dress implies freedom; in its starched purity, it suggests a challenge—to maintain a ruthless honesty with herself and with the world.

I thought of the dress when I first met Nixon, at the Eric Winterling studio, a costume shop on West Twentieth Street. She was trying on what she would wear for both of the parts she would play in “The Little Foxes.” Surrounded by a half-dozen people whom she had just met, she undressed and stood in front of the three-way mirror, waiting patiently and without self-consciousness for the costumers to build her character from the stockings up. She tried on a corset and several heavy crinoline dresses before putting on one of Regina’s plain white nightgowns. Suddenly, she was Dickinson again. Looking at Nixon, one of the costume designers started to sing a Dickinson poem to the tune of “The Yellow Rose of Texas.” He always remembered that the singsong quality of Dickinson’s work was, he said, “a little childlike.” Nixon looked at him in the mirror. “No, it wasn’t,” she said, politely but with firmness. Dickinson wrote the poems that way because it was the meter of common Protestant hymns, she explained; the hymns were just what Dickinson would have known. It was a calm defense of mystery; the hymns were the form for the verse, but explained little of their deeper allure. Nixon added, “That is the mistake many people make.”