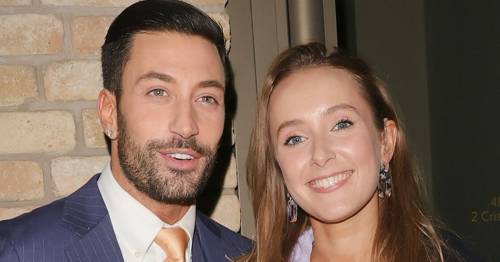 Strictly Come Dancing's Rose Ayling-Ellis ' transformation for Musicals Week is in full swing as prepares to take to the floor as Princess Anna from Frozen.

Hours before their eagerly-anticipated performance, Rose's professional dance partner Giovanni Pernice posted a video to his Instagram Story the EastEnders actress in the make-up chair.

"Hello, do you like my new look?" asked Rose, as she posed with a face full of make up and her long blonde locks scraped back under a cap.

"No. It looks like you're going to a fight," Giovanni quipped back.

Rose, 26, then leaped into action and pretended to square up to the Italian star, 31, with a series of playful digs.

This week will be Musicals Week

Rose is transforming into Elsa from Frozen

On Saturday night's action-packed Strictly the pair will dance a Quickstep to Love Is An Open Door from hit musical Frozen.

Last week the couple stunned viewers as they incorporated a silent moment in their Couples Choice routine to Symphony by Clean Bandit and Zara Larsson.

Rose is the first ever deaf contestant to compete in the show and has explained before that she is able to dance to the music by counting to the beat and feeling the vibrations of the music.

People in the studio are asked to not clap while Rose is performing so she can still feel the beat of the music.

Rose then started playfighting with Giovanni

Last week they had a silent ten second in their dance so viewers and the judges would understand how Rose feels when she's dancing and how she learns the routine.

They were scored 39 points out of a possible 40 as judge Craig Revel Horwood deducted a point for technical reasons.

Rose has continued to impress the judges and fans throughout the competition as she was the first contestant to earn 40 point this series, as well as being the first 40 in Strictly history.

The performance brought many people to tears including judges and Gogglebox's Jenny Newby as she said: "This is the bit for deaf people."

Following the performance, Rose said: "Being deaf, there's nothing wrong. It's such a joy to be deaf."

Judge Anton Du Beke got emotional when talking about the moment as he said: "That's the greatest thing I've ever seen on the show. Congratulations."

Head judge Shirley Bassey got to her feet and said it was 'absolutely beautiful.

She added: "I'm sure the deaf community will be so proud of you. This is a number that will be etched in my heart for a long time, it was absolutely beautiful."

Rose and Giovanni appeared on This Morning on Friday where she spoke about the 'special moment'.

She explained how hard deaf people have to work and how hard she's worked during her time on the show.

Rose said: "It was a special moment for me because a lot of the time you always see a deaf person getting on well and doing what is normal but you don't see how much hard work goes behind it.

"So I think the silent moment was to show this is what I do when I dance. This is the amount of work I do. But I still do it with a smile on my face."